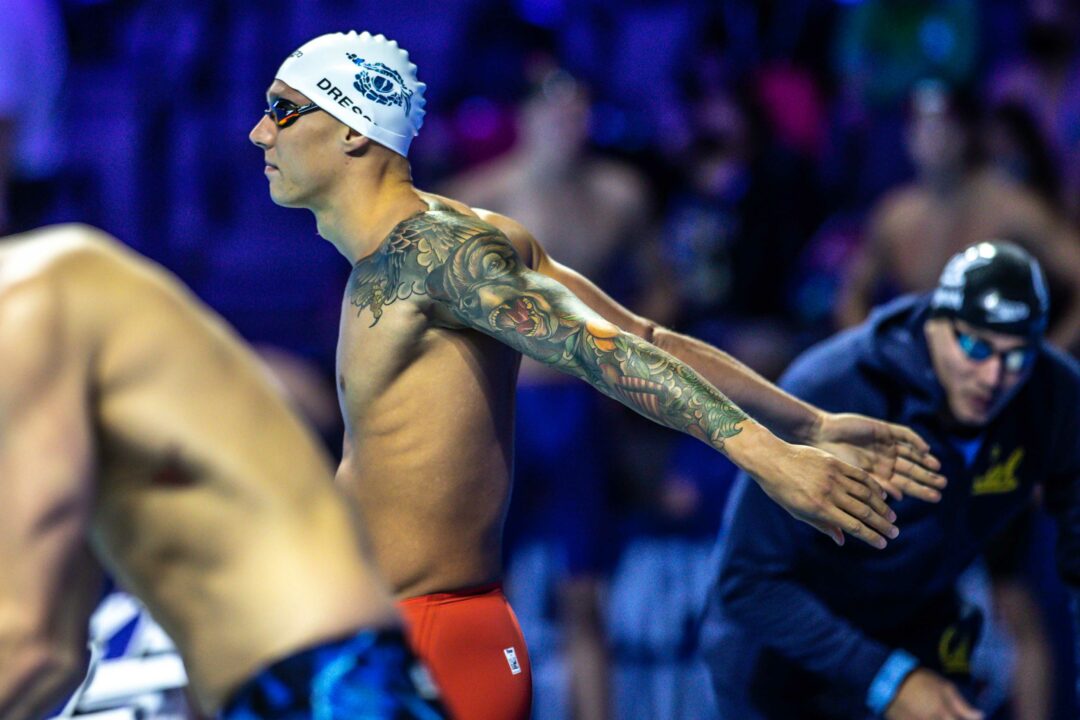 After winning the 100 free semifinal on Wednesday night, Caeleb Dressel scratched the 200 IM to focus on the 100 free final tonight. Current photo via Jack Spitser/Spitser Photography

#14 seed Caeleb Dressel scratched the 200 IM on day five of the 2021 U.S. Olympic Trials Wave II. He won the 100 free semifinals Wednesday night and will focus his attention on the final tonight. #8 seed Shaine Casas also scratched the 200 IM, likely to focus on the 200 back where he is ranked 3rd.

There were three scratches in the men’s 200 back: #12 seed Sam Stewart, #21 seed Kieran Smith, and #24 seed Jack Dolan. Both Stewart and Kieran have the 200 IM where they are ranked 6th and 12th, respectively. Dolan’s next race will be the 50 free on Saturday.

I think he pretty much explained that about 2 months ago. Swim the Prelims to get a relay worthy time, then scratch it to concentrate on his favoured events. Did he do enough? Probably shouldn’t be, considering there could be 7 swimmers on the team quicker than him on paper. It’s a bit of a gamble selecting you’re 8th fastest swimmer on the off chance he might swim 2 seconds quicker on the night.

Not to mention, if Dressel felt he had a 1:44 or faster in him, why didn’t he have a go at the semi-final?

In 2012 they put Lochte on the 4 free relay even though he had the 10th fastest time at trials so it’s not unheard of.

True… Although that was also an advert for why you shouldn’t.

Why he would have swum 3 rounds of 200 free?
He has no gold medal chance in that event.
And he was not even sure to be top 2.
He only swam the prelims to say the US coaches that he’s available for the 4X200 free relay in Tokyo.
He needs to save as much energy as possible for the grueling second half of the olympic games with all the finals of his best events (100 free, 100 fly and 50 free) are all scheduled from Thursday to Sunday.

I think Bobo Gigi is correct, what people fail to realize is at this point in the cycle for athletes at dressels caliber this is a marathon. These maximum efforts at this frequency can take a toll on the body, athletes should be strategic with what they choose to pursue.

Have a feeling he’s about to get shut out of the top two…
Hope he gets in the top 6 at least.

There’s no way that Lochte swims the 200 back prelims, right?

Bobo, no downvote, I don’t think this ever happened to you 😉

To be fair, Huske nearly qualified in the 200 IM

Also, is this the year the sprint breaststroke Dressel did in college catches up with him?

Torri placed 4th in the 200 IM and almost finaled in the 200 free which would’ve been close for a relay spot. I’d say her choice to swim those races were justified. She’ll be fine in the 100.

She’s also really young and already on the team. Why not see what you can do in some of those events and maybe set up a bigger schedule in 2024?

A defending 200 Breast Rio swimmer doesn’t even bother to swim the event?

yeah idk why Hannis dropped it. That’s so odd.