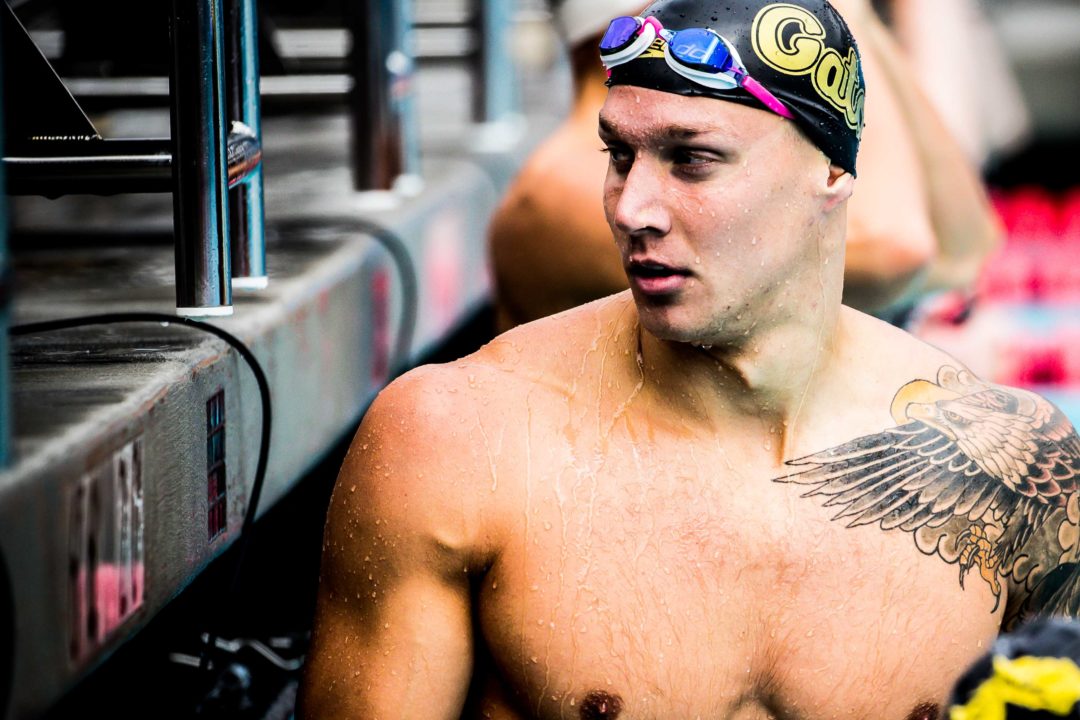 A showdown with Kyle Chalmers and the chase to get under 47 seconds is what's on the line for Caeleb Dressel in the men's 100 freestyle at Worlds. Archive photo via Jack Spitser/Spitser Photography

Chalmers, at just 18 years of age, went out and won the Olympic gold medal in the 100 freestyle three years ago in Rio, utilizing some incredible back end speed. He went sub-48 in all three rounds of the event, with second 50 splits of 24.23, 24.53 and 24.44. He turned seventh at the 50m mark of the final before blowing by everyone and winning in 47.58.

The following year, after Chalmers withdrew from the World Championships to undergo heart surgery, Dressel completely dominated the event en route to gold in Budapest. He kicked off the meet with a new American Record on the lead-off of the men’s 400 free relay in 47.26 and then annihilated the field in the individual event in 47.17.

When the two collided last summer in Tokyo, the buzz around this race had lost some of its lustre.

Dressel fell flat at U.S. Nationals, no doubt due in part to a motorcycle accident shortly before the meet, and limped his way into the Pan Pac final of the 100 free.

With the American off form, Chalmers just needed to be good, not great, in order to win the gold in the event in a time of 48.00. Dressel tied another Aussie Jack Cartwright for silver in 48.22, putting himself on the Worlds team by the skin of his teeth (Nathan Adrian‘s 48.25 from Nationals was the time to beat).

Had he failed to top that 48.25, he’d have to wait until the 2020 Olympic Games to have another shot at Chalmers in a major international final. What a shame that would be, considering what we’ve seen from the two in 2019.

Sitting on his Rio PB for almost three years, Chalmers has now been quicker twice over the last few months, first hitting a 47.48 in April before dropping a 47.35 at the Australian Trials in June to take over the #1 time in the world.

As for Dressel, he and his American teammates haven’t had a reason to fully rest yet this season, but that hasn’t stopped him from throwing down some sizzling swims. He has now been under 48 seconds three times this year, going as fast as 47.86 which is close to a full second better than his fastest swim in-season prior to this year (48.74).

The performances from the two over the last three years is enough to make this one of the marquee races on the program in Gwangju, but the opposing ways the two swim the event significantly adds to the intrigue.

Dressel closing average is 25.00 to Chalmers’ 24.41. Which race strategy will prevail?

Ultimately, it seems the defending champion has more room to drop opening up. He’s been out as fast as 22.29, while the Olympic champ Chalmers has never been out sub-23. Coming home, Dressel has dipped into the 24s, and has seemingly put more of an emphasis on that aspect of the race this year. Chalmers consistently closes like a freight train, but he’ll need a bit more front-end speed to be able to mow down Dressel for gold.

Ultimately I think Dressel will gain more on Chalmers on the first 50 than the Aussie will gain on the American on the second 50, leading to a Dressel title defence. Somewhere in the 22.8 range is where Chalmers should aim to be out in order to win his first World crown.

While those two carry a fascinating storyline into the race, there are a host of others who will be in the hunt for medals with the ability to steal the gold.

Three others have gone under 48 seconds in 2019: Vladislav Grinev, Marcelo Chierighini, and Duncan Scott.

Coming off of a fourth-place finish at the European Championships last summer, where he rattled off the three fastest swims of his career (going as fast as 48.36), Grinev did the same at the Russian Championships this past April. The 22-year-old hit times of 47.74, 47.43 and 47.65 in succession to take over the top spot in the world (at the time) and put himself in the running to join Alexander Popov as the only Russians to win the 100 free at the World Championships.

His splitting is somewhere in between the two extremes of Dressel and Chalmers, and a perfect swim could sneak him in for a victory. We must remember that Dressel has only been faster than Grinev’s 47.43 three times (all at 2017 Worlds) and Chalmers has only done so once.

Chierighini has consistently been one of the best sprint freestylers in the world for the last six years. He is one of just three swimmers, along with Nathan Adrian and Cameron McEvoy, to make the final of the last three World Championships along with the 2016 Olympic Games. Stuck at a best of 48.11 since 2013, the Brazilian bulldozed past that mark in April in 47.68. His ability to perform at the big competitions coupled with him being on the best form of his career make him a dangerous man.

Similar to Chierighini, Scott has been consistent in this event, but over a shorter period of time. He was 48.0 in Rio, 48.1 in Budapest, and then 48.0 once again to win the Commonwealth title last year (also took silver at Euros in 48.2). He has now busted through the 48-second barrier twice, both at British Championship meets in 2017 and 2019, and if he can shift a similar performance over to the international stage he’s in the medal hunt.

There are so many others with a chance it’s difficult to narrow it down. Italian Alessandro Miressi is on the rise after winning the European title in 2018. Blake Pieroni takes over for Adrian as the second American entrant alongside Dressel, and with a full year solely focusing on long course, he’s a threat to get into the 47s.

Vlad Morozov, He Junyi, Breno Correia, Katsumi Nakamura, and Nandor Nemeth have all been 48-low this year.

Mehdy Metella was challenging Dressel for gold in Budapest up until the last 15 metres or so of the final, ultimately taking bronze, but hasn’t been within half a second of the 47.65 he went in the semis there since.

And then there’s Pieter Timmers, who moved his way through the field to win silver behind Chalmers in Rio in a best time of 47.80. That remains his only swim under 48, but he notably swept the event over the three stops of the FINA Champions Series, which ran from the end of April until the beginning of June. He’s someone who comes in flying under the radar but cannot be counted out.

Darkhorse: Oussama Sahnoune of Algeria missed the 2017 World Championship final by just two one-hundredths of a second, going 48.33 for ninth in the semis, and then followed up by blasting a lifetime best 48.00 to win the 2018 Mediterranean Games and put himself in a tie for sixth in the world rankings for the season. 48.51 in April marks his fastest ever swim in-season which potentially lines him up to shake up the big names in Gwangju.

I think Correia will final, his 48,11 was gliding and he steps up at big champs

He’ll need to step up to final. Lots of men will really fancy their chances. Wouldnt be surprised to see a few expected names miss out.

Would be a funny story if everybody at the World Champs talks about the epic battle between Chalmers and Dressel and in the end Grinev, that most people wouldn’t even recognize if he was standing in front of them, wins the whole thing.

2015 all the talk was about Morozov, Adrian, and McEvoy (and even Condorelli), only for Zetao to come out of nowhere to win.

I don’t think you can discount any of the big guys in this or the 50. This is the third most likely super-suited record to fall in terms of standard deviations from the record by recent swimmers. (Following the 100 fly and men’s medley relay). But with the complexity of relays and their multiple variances I think the 100 free is the second most likely super-record to fall.

Download to GoogleDocs to see the graphs correctly, they don’t show up right in preview mode

Or Timmers …the guy can surprise too .

Well, in recent history, the 100m freestyle seems to have the least predictable results on both the men’s and women’s side.