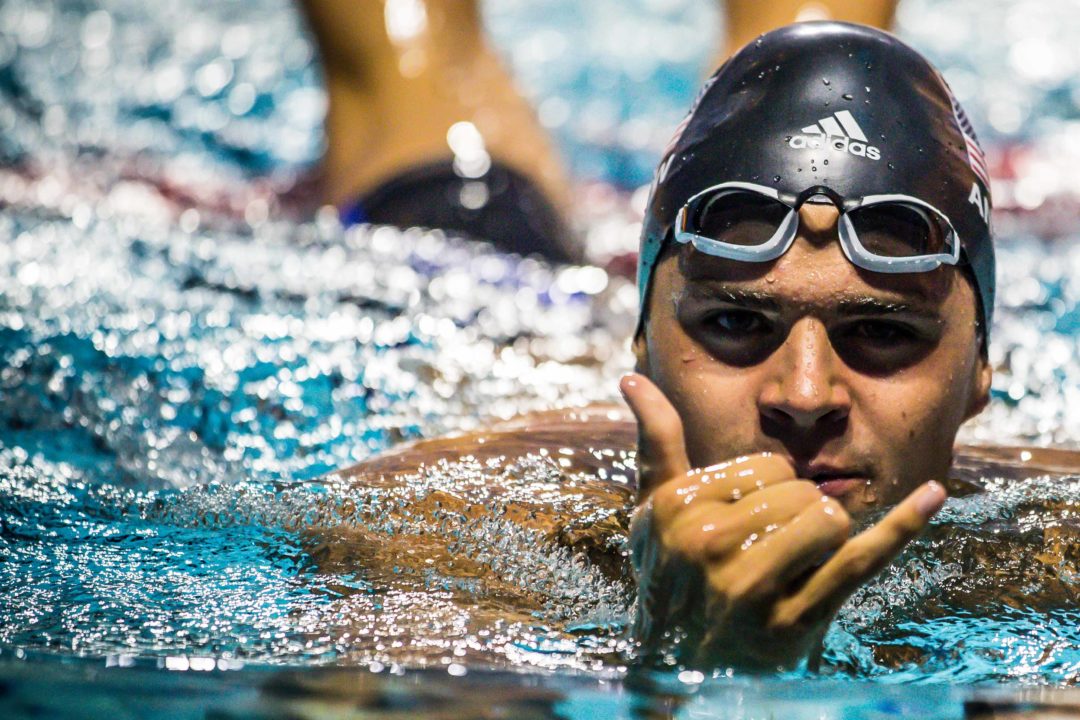 Less than a week out from Andrew leaving for the World Champs training camp in Singapore, we caught him on a normal training day. Current photo via Jack Spitser/Spitser Photography

Ever since Michael Andrew told SwimSwam that he’s mostly been doing 25’s and surfing as his training this year, I think it’s safe to say most people were curious as to what that actually looked like. Well, we were so curious that we went to down Encinitas to find out. Less than a week out from Andrew leaving for the World Champs training camp in Singapore, we caught him on a normal training day.

I joined the family for breakfast after Michael had already swam in the morning, and then we hit the beach. The break that the Andrews surf at is a 10 minute walk from their condo in Encinitas, and it doesn’t get much more dreamy. While Michael, Michaela, and Peter all hit the boards, I dawned a wetsuit and filmed them catching waves for about an hour. I’ll be honest: after that first hour of getting pounded by waves, I was bushed. Michael was out there for at least another 2-3 hours, so you can see where his endurance is coming from.

For his third workout of the day, Michael and Peter drove down to the Magdalena Ecke Family YMCA, their usual training spot. After warming up, Michael swam 14 fast efforts:

One thing this really brings to light is the simplicity of swimming fast.

Whether you’re Dressel putting in big yards and logging your stroke in explicit detail, Cody Miller watching video with Ray Looze, getting real time feedback in your ear from Gary Hall as you swim in the Keys, Phelps and Bowman status where your coach can hear your stroke and tell you the status of your technique, or Michael and his dad where he’s getting a ratio of 10 seconds of work to 25 seconds reviewing the technique of the last effort:

2) Strive to improve your stroke

Fun way to get into swimming shape.

That is not important USA has plenty of sprint 100 freestylers

Had no idea they were casting the lead for a 21st century version of North Shore. Turtle say ” he get drilled on that fish in big break. Chandler no like it anyway.”

Surfing must be training for that straight arm.

And those shorts: stole them from Karch Kiraly or Sinjin Smith. Guess he’ll take on the AVP tour too.

Too bad their is no longer a bush war in Rhodesia; bet he’s got the boots and shorts to match for those living history weekends.

Just curious – why do so many swimmers ( especially from the US) seem to be uneven with their arms – one straight , one bent, for example. Also stroke rate sometimes seems to be left, right ….pause … left, right …pause. Not saying it’s not working for them though .

Gary Hall Sr does a video in which calls it the “hybrid” between hip driven (distance) and shoulder driven (sprint).

I think Lochte and, particularly, Phelps pioneered that kind of galloping stroke (though the most extreme version of it was Biedermann) for the 200. Most current pros grew up watching and emulating those guys, particularly in the US. It wasn’t something the guys who swam with Phelps and Lochte did, PVK, Keller, Berens etc. all had even, hip driven strokes.

Are you describing a galloping stroke?

Is MA’s dad a former swimmer?

He was a South African Navy diver

Michael, you need a bigger board. That’s a sweet little fish,but you will have way more fun riding a thicker and or longer board while you learn. Swimming looks good though!

Cut him some slack. Dude is from Kansas. Still learning.

Surfing in the morning…training in the afternoon…hours in the warm sun instead of cooped up in an office…I could think of worse ways to spend the day!