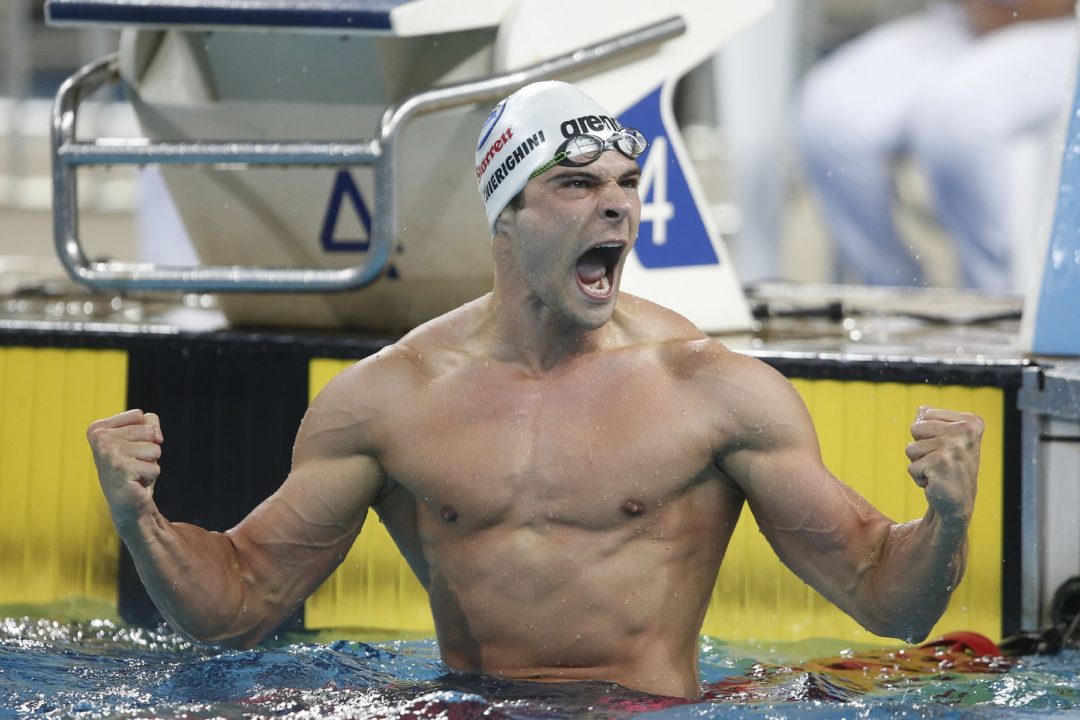 Pinheiros’ Marcelo Chierighini fired off the third-fastest 100 free in the world this year during day three finals of the 2019 Brazil Trophy, Brazil’s national championships.

His time is the fastest by a South American in the textile suit era, breaking Cesar Cielo‘s previous record of 47.84, set all the way back in 2011 at the Pan American Games. Cielo is the 100 free world record holder with his super-suited 46.91 from the 2009 World Championships, and is the head of a proud Brazilian sprint tradition. He currently is without a team and is thus not swimming at the national championships, or by extension, Worlds this summer.

In second place Thursday evening was Breno Correia, 48.11; his best time before his prelims swim (48.32) was 48.99. In third was Pedro Spajari in 48.34, and taking fourth was Gabriel Santos in 48.53. Notably, all four top swimmers represent Pinheiros (Cielo’s former club). Those swimmers will comprise Brazil’s 4×100 free relay this summer in Korea.

Louisville post-grad Joao de Lucca (Minas), who qualified for the Worlds 4×200 relay on night one, finished seventh in 49.07, and Marco Antonio Ferrieria rounded out the A-final in 49.10.

So many 47s this year before worlds… gonna be exciting

At last Worlds Brazil was second in the 400 free relay, three tenths behind Usa, and Chierighini, the second man in that relay, swam a huge 46.85 (0.15). This 47.68 flat start is comparable to that 46.85 flying start .
Santos and Chierighini were in that relay with Cielo (48.01 in the final) and Fratus (great 47.18).
At Worlds2019 there will be young guns Correia and Spajari and Brazilian 400 free relay will remain extremely competitive.

Nuoto remember Spajari went 46,94 on pan Pacs, Breno 45:3 on SC worlds.. and they will swim as relay on this championship yet..

I doubt he went 46.9. Please check your sources.

Thanks Braden!!!
Usa X Rus X Bra will be tight on worlds

Watch out for Italy too.
Specially if Santo is there in full form with Dotto , Miressi and Vendrame.
And if Mcevoy regains half of his top form, and along with Cartwright and Chalmers, even Aussies can put up a good race.

Yes, I remember. As usual, all will depend on form at the big event, but Correia (really steady his growth) and Spajari are certainly capable of great things.

This race is going to be carnage at Worlds. Pre-Olympic year positioning.

That is a large man

Fratus returned swimming in Januar yonly and could only resume training hard on February.. he will be much better at Worlds (I hope he qualifies on 50 free)