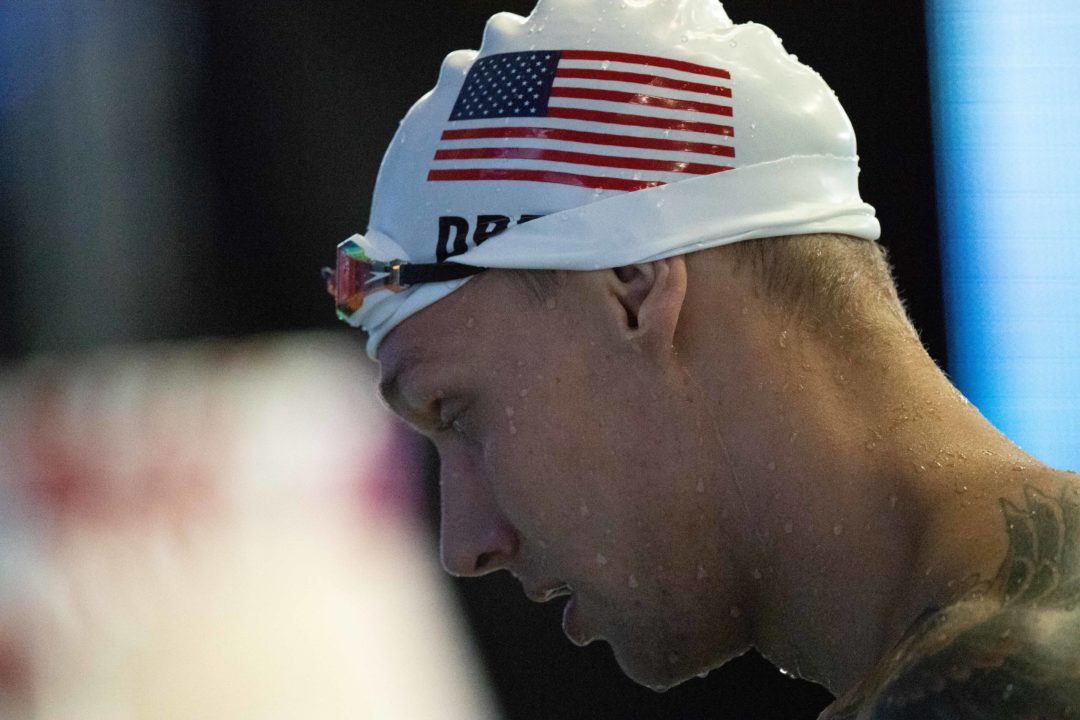 After some head-scratching performances from Olympic gold medalist and 7-time World Champion Caeleb Dressel at the 2018 U.S. National Championships and subsequent Pan Pacific Championships, it now appears as if some degree of explanation has emerged.

Following the 50 freestyle in Tokyo, where Dressel finished 2nd (21.93) behind American teammate Michael Andrew (21.46), Dressel told NBC Sports’ Ahmed Fareed that “It wasn’t anything too big.” He went on to say, “I had a gentleman pull out in front of me, so I had to avoid him… nothing major [of the injuries]. A few minor things. Other than that, I was fine… I think the accident was as lucky as I could have gotten with it. It maybe, maybe didn’t interfere with my training.”

In regards to riding the motorcycle moving forward, Dressel noted, “A lot of people have put a temporary hold on me… probably a permanent one.”

Individually, Dressel wrapped up Pan Pacs with 1 gold medal (100 fly) and 2 silver medals (50 free, 100 free). However, his times over the last 2 weeks were not at all reflective of his 2017 performances.

Interesting how they wait and release this info post meet. Like just in case it doesn’t go how we want it. #excuses

To all those regularly posting SS experts who said Dressel was over trained, putting in tons of yardage, Greg Troy must be working him hard, probably hasn’t had a day off in a month. LMAO

Will he be competing in anymore meets this Summer?

Michael – for American swimmers, this is effectively the end of the summer season (aside from Jr. Pan Pacs). The next big series of internationaly-type meets is the World Cup, which begins on September 7th and has a mix of LC and SC meets this year (starting with two long course events). Given that Troy’s swimmers haven’t historically participated, I think it’s a long shot that Dressel will race at the World Cups, but it is an opportunity for a pro of his caliber to rake up a lot of money…

i assume he hasn’t finished college either, since most swimmers seems to always take a fifth year to finish college..

This seems to be correct as well. Only 6 swimmers were listed as part of the spring graduation: https://floridagators.com/news/2018/5/4/general-gator-student-athletes-participating-in-spring-commencement.aspx

Unless he just had 1 or 2 classes that he could maybe take online this summer, he probably is still in school.

I think you might be thinking of Dean Farris, who would not get any bumps or scrapes.

maybe he can make a motorcycle one now …

For all of you people that can’t read… “Why is there no scrape on him? WHERE IS THR SCRAPE???” it clearly says he fell on a grassy median, NOT CONCRETE so there is no scrape. Also to add on I am glad that this has leaked out. There is finally a reason for his subpar performances at pan pacs.

I could swear many Swim Swam experts explained the reasons were:

Love it. There are at least 10 more reasons the self proclaimed experts were citing

You forgot his new dog.

Motorcycle accidents. Stomach problems. Please. Excuses galore. So tired of this. Baker and Caleb. Just swim already. Nobody wants to hear ur excuses. Everyone has them. It’s poor sportsmanship.

Baker has Crohn’s disease. There’s a difference between an excuse and an explanation.

some people here have no empathy at all – Sad to see unfortunately too often on the web .

Kathleen has Crohn’s disease which is a lifelong inflammatory bowel disease that can effect her entire GI tract. It waxes and wanes. She has to manage her disease daily and going to a different country with different food and water could easily cause a flare even put her in the hospital. Some cases require segments of bowel to be removed. Some people get fistula, bowel strictures, abdominal abscesses. So WTF it is not an excuse but a real triumph that she is so brave and accomplished.

I have had motorbike accidents ( Part of my destiny – not by fun choice ) and i can tell u – it can do what it did for Caeleb. At least he had the decency to swallow it up & go to those 2 big meets – regardless of the OUTCOME . That outcome is what the fans were expecting – and were deceived with . But what really matters is what he learned from it ” Being more careful on a motorbike is 1 ) an accident can leave nervous/muscles traces for a while 2) Being honest with the situation is key 3) . They will be back to training , recovery , etc….. and lessons are learned… Read more »

I don’t think CB ever made any excuses for his performance. He was actually doing the opposite. Baker has Crohns. Crohns is a disease that she has little control over. I think some of the comments have been very unsympathetic and also lack u derstanding of how taper, double tapers, time zones and swimming at that level operates. Let’s support our swimmers!! The goal is 2018!!