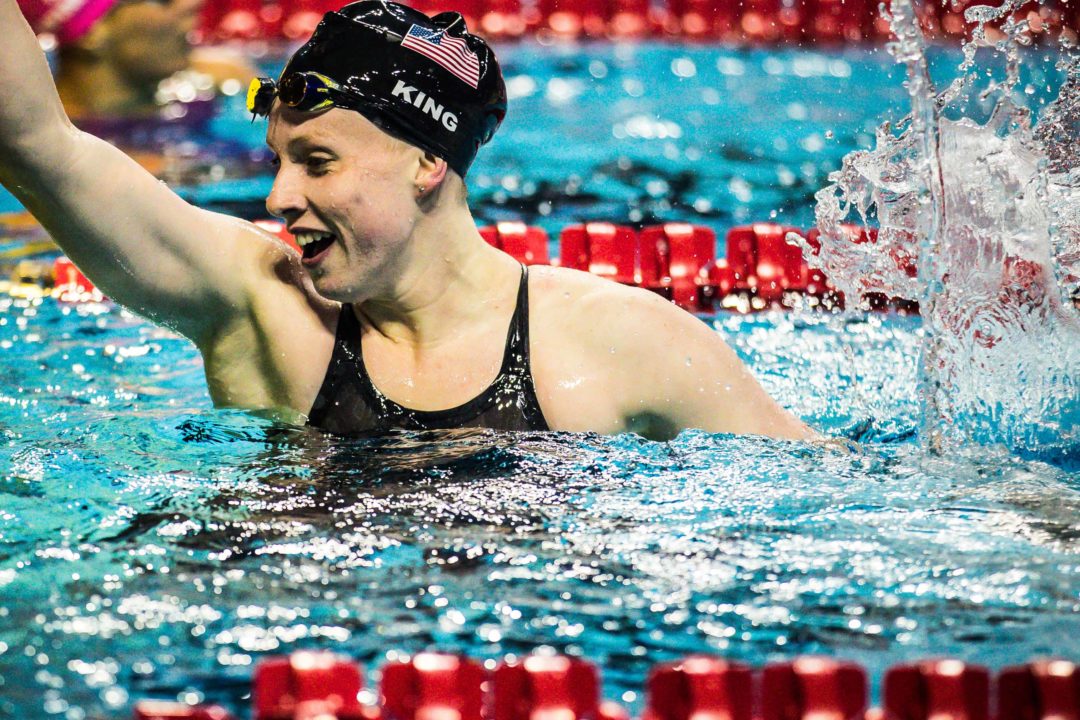 Annie Lazor won't be swimming at Worlds. With it being unclear whether Yulia Efimova, the defending World Champ, is swimming it -- can the winner beat Lazor? Archive photo via Jack Spitser/Spitser Photography

At the Bloomington Pro Swim Series stop in May, a rested Annie Lazor dropped a 2:20.77 in the 200 breast, making her the 9th-best performer in history in the event. As she’s skyrocketed into the world top 10 all-time next to impressive company (only Rebecca Soni, who was at one point the world record holder in this race, has been faster out of all Americans in history), we are reminded of one thing: she won’t actually be at Worlds.

The much-maligned selection procedures for 2018 Pan Pacs and 2019 Worlds meant that the top swimmers of 2018 would represent the USA at both meets. While this selection procedure is supposed to lead to a stronger result at the Olympics of that cycle (see the Americans’ dominance in Rio in 2016 versus their gaffe of a meet in Kazan in 2015), it means that even some of the best swimmers in the world in 2019 still won’t be able to race in Gwangju (see: Lazor).

So, with Lazor’s 2:20.77 leading the world rankings this year, it’s the rivalry of Lilly King and Yulia Efimova that moves into the forefront. While their stances have softened since the politically heated finger waggings of 2016, they are always trading blows, knocking the other off of the top of the world rankings, going head-to-head at every major competition. It’s definitely the weaker of the three distances for King, who has world records in the 50 and 100 breast, but the American has been 2:21.39 this season in a thrilling battle with Efimova at the Indy stop of the FINA Champions Series. That was a lifetime best for King, who may be poised to fully figure out this race in long course after settling for fourth at the 2017 Worlds and the silver medal behind teammate Micah Sumrall at the 2018 Pan Pacs.

Efimova, in her loss to King in Indy, was just two tenths back at 2:21.59. What the Russian has that the American doesn’t, however, is a much better lifetime best (2:19.41). On top of that, Efimova has been under 2:21 eight times, and under 2:20 four times. But Efimova may not even be swimming this at Worlds. She missed the top two at Russian Nationals this spring, as the event was won by 14-year-old phenom Evgenia Chikunova with a 2:22.67 with Maria Temnikova second at 2:23.45. As of right now, it’s up in the air as to who is going to be racing the event in Gwangju — Chikunova’s name is on the roster, and Russian coaches have said that she’s a reserve who will swim the 200 if a swimmer backs out. Efimova has said she’ll race the 200 if she is asked to, but would be okay swimming just the 50 and the 100.

If Efimova opts out of this, it may well be an American 1-2 here.

Sumrall, meanwhile, has revived her career after missing the 2016 Olympic team. She’ll represent Team USA with King in this event in Gwangju after storming back to racing in 2018 following nine months off, her year culminating in a gold medal at Pan Pacs with a time of 2:21.88. That was just off of her lifetime best, a 2:21.74 from the 2013 World Champs where she earned a bronze medal. Sumrall has been 2:23.88 this season, but her potential for 2:21 leaves her with a great shot for the podium — in 2017 in Budapest, only the medalists broke 2:22.

Last year, Japan’s Reona Aoki had the second-fastest time at 2:21.85. Done at the Japan Swim in April, it would’ve won gold at the 2018 Pan Pacs, and was about a second back of Efimova’s 2018 best of 2:20.72. Aoki took bronze in the 100 breast at Pan Pacs (just ahead of Sumrall) but was left off the podium in fourth in the 200 after a disappointing 2:24.46 despite her season best from Japan Swim. An on-form swim from her could send her right into podium territory.

A surprise name near the top of the world rankings this season is China’s Ye Shiwen. The 2012 Olympic champion in both IM’s at 16 (with a wild sub-1:00 final 100 in the 400 IM), Ye floundered in the years following the Olympics. She hasn’t won a medal at an Olympics or a Worlds since London. That said, she dropped a 2:22.53 earlier this year, and has moved into the conversation for this event in Gwangju.

Canada will send Trials champion Sydney Pickrem and 20-year-old Kelsey Wog — both women hit 2:22’s this year, giving them a strong chance to at least make the final. Notably, this event will be without Canadian big name Kierra Smith, who swam a 2:21 but DQ’d in the event at Canadian Trials this spring.

Smith is one of several women not returning from the last Worlds final, as well as silver medalist Bethany Galat of the US and 7th place Taylor McKeown of Australia. Galat didn’t make top two last summer, while McKeown won Australian Trials but failed to reach the qualifying standard.

One more returnee from that final who has a great medal shot is Shi Jinglin of China. She won bronze in 2017, going 2:21.93 to edge King off of the podium. It’s Ye, though, who has been (by far) the most impressive Chinese woman in the event this season.

Darkhorse: Molly Renshaw of GBR. She won bronze last summer at the 2018 European Champs behind Efimova and Vall, and also swam her way to silver behind Schoenmaker at the 2018 Commonwealth Games. She’s just inside the world’s top 10 this year, and while her lifetime best of 2:22.33 is from all the way back in 2016, a good swim here could get her into the final amongst a pack of 2:22’s.

I feel like this event is crying out for new blood. We’ve been seeing the same names in finals for years and years. You need a 2.23/2.24 lady to really step it up; Maybe someone like Kaylene Corbett… Big drop to 2.24 at SA champs to push Schoenmaker close and she just turned 20 a few weeks ago.

Ye could be top seed then finish 4th

I think:
1) Japan or Canada will win a medal
2) More than 1 european woman will make the final
3) Schoenmaker will be worst than 6th, possibly not even make the final

Why would Lazor add time?

She has been on fire this year but I think her 100 is going to be much better than her 200 at Pan Ams, its just my prediction. I have a really good feeling about her 100.

as much as I would like Lazor to do amazing at pan ams it’s just realistically very hard to double up on a 2:20 swim after that much of a drop so I agree with you here

I really don’t like how the 200breast at Russian nationals may not be swam by the winner. That doesn’t seem right to me

If they can do that, they should let Lazor swim it lol

The problem is the two different “they”s. Russia is allowing Efimova to swim. The US isn’t allowing Lazor to swim. FINA is relatively hands-off regarding countries’ selection processes. So the US probably could allow Lazor to swim, but the US is sticking to their process.

Yeah, I understand that.

I think the crux of the matter is age. We see American coaches pontificate on the regular about slowing down young phenoms, so it’s possible that Russia is taking a similar tact.

Alternatively, it’s possible that they’re using the above as cognitive dissonance to justify putting the defending World Champion in the event.