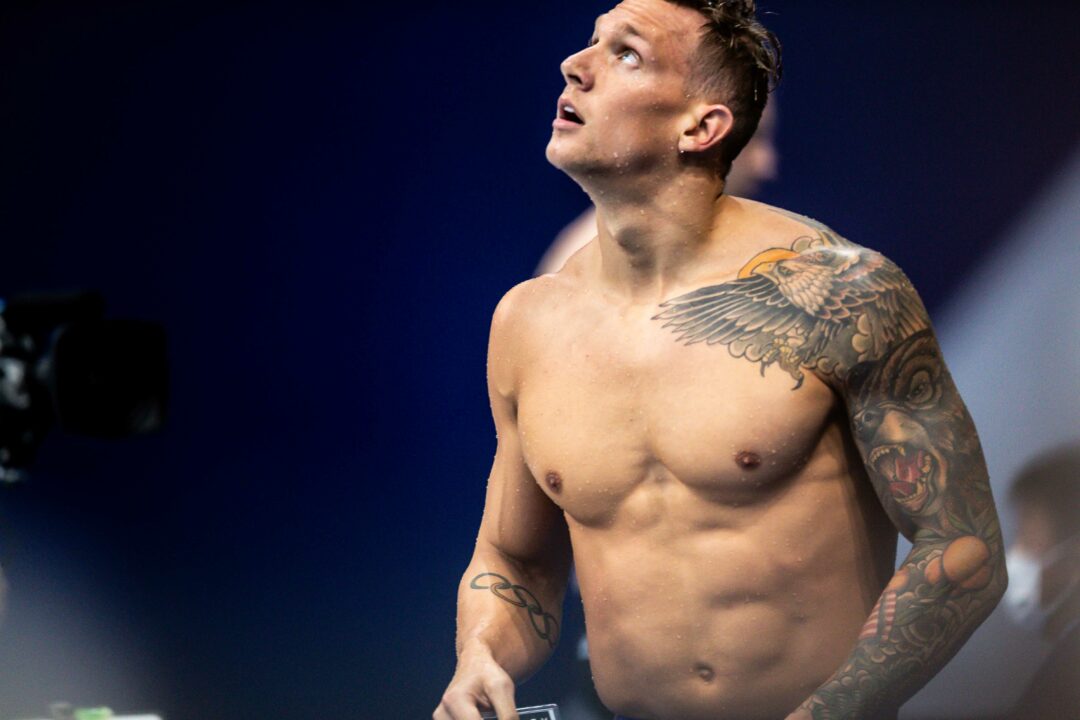 Starting what could be an event triple this session, Caeleb Dressel will look to lower his own Olympic (49.71) and world (49.50) records in the 100 fly. The event could also be Dressel’s fifth Olympic gold medal and his third of these Games.

He’ll battle 200 fly gold medalist Kristof Milak, the world record-holder in that longer butterfly event. Milak’s racing suit ripped minutes before the 200 fly final and he was still able to switch suits and return to win Olympic gold. He’s on the cusp of joining Dressel, Michael Phelps and Milorad Cavic as the only men ever under 50 seconds in this 100 fly.

After winning gold in the 100 back, Australia’s Kaylee McKeown is on the warpath for a backstroke sweep. Last month, she went 2:04.2 at Australian Olympic Trials and sits #3 all-time in the event with a chance to move past former world record-holder Missy Franklin with a 2:03 swim today.

It’s actually her countrywoman Emily Seebohm who leads the final after going 2:07.0 out of semis.

American 18-year-old Phoebe Bacon is the #2 seed, swimming from lane 5. The event will also feature 100 back silver medalist Kylie Masse out of Canada.

Behind her, it’s starting to look like a case of déjà vu. American Katie Grimes is 15, is coming off a breakout Olympic Trials performance, and has smashed her way onto the international scene with steady time drops throughout her world debut. Right down to the first name, Grimes is slowly replicating what Ledecky did nine years ago. With her heats swim, Grimes moved past the legendary Janet Evans to trail only Ledecy in the U.S. all-time 15-16 age group ranks. She’ll chase Olympic silver as the second seed behind Ledecky.

2019 World 1500 free champ Simona Quadarella disappointingly missed an Olympic medal in that event, but she’s seeded to challenge for a silver or bronze today. 1500 free bronze medalist Sarah Kohler is also in this field, along with fourth-placer Wang Jianjiahe of China and Australia’s 200/400 free gold medalist Ariarne Titmus.

A brand-new Olympic event, the mixed-gender medley relay is turning lineup strategy decisions all the way up to eleven. The contending nations have a wealth of lineup options with a bunch of factors to balance.

The relay features two men and two women swimming in the traditional medley relay order: back, breast, fly, free. Teams can choose to use their men or women on any of the four legs – though general swimming strategy would prioritize getting out front and into clean water with male legs on back and breast, so as to reduce the chop and water turbulence for the fly and free legs.

But not every roster conforms well to that pattern. For the U.S., for instance, star swimmer Caeleb Dressel should swim fly or free, which means the U.S. will have to get creative with their early lineup options.

The other factor is event doubles. Dressel will swim the 100 fly final and 50 free semifinals earlier in the session, perhaps adding up to a high level of fatigue by this relay.

Top-seeded Great Britain should have a relatively rested lineup, with a built-in breaststroke advantage. Adam Peaty routinely outsplits the world by a second or more on breaststroke, and should join this relay for the final.

The U.S. could swim any of five different lineups, choosing between two bronze-medal backstrokers (Regan Smith, Ryan Murphy) and making the tough call on Dressel.

Australia has a wealth of dominant freestylers to choose from, most likely Kyle Chalmers or Cate Campbell leading the options. Emma McKeon should be an elite fly leg.

28
-3
Reply
Stephen
Reply to  Brenard is losing some ground

It does a huge disservice to the swim Chalmers had. Not to take anything away from CD, but if Kyle was in the lane next to Dressel and could catch even a fraction of a draft, I think we might’ve had a different result.

In the wise words of Rafael Nadal – If If If, Doesn’t Exist. Take your L. Dressels the real King.

Dude it really is fans of team usa that are so easily offended. This dude wasn’t even trying to talk trash, why would you take it that way

Yeah he might of only won by .05. Don’t complain about your pain, swim faster in semis

one of the US swim coaches will hang a face mask off of a remote control drone and then chase MA with it down the pool this semifinal. the WR will be smashed

it’s actually a slight tweak of a joke i saw earlier, gotta give credit to that guy whoever they were. it’s still a surefire plan for 100% success tho

Manaudou suprised me in the last session ! During the heats he seemed to be holding on pretty good to Caeleb (surpringly good even) until the last 5m where Caeleb put on the turbo and Manaudou slowed down a bit
I must say that even if Caeleb’s the favorite to win (by far), in the end this race is a 50 ; if you’ve got a lane you’ve got a chance to win
Look at the European Champs, huge upset and weird times in the men’s 50. Who could have said that Liukkonen was about to one-dolphin-kick his way to gold ?

Hey SwimSwam — First let me say I think you’ve done a great job with the coverage for these Olympic Games. I;ve read many great news stories, analysis and commentary about the events both in and out of the pool.
I would be very interested in a story after the end of the swimming events about the site itself. How did your traffic change? Maybe some of those stats you guys and gals do so well: number of unique vistors, unique commenters, what countries they were from, peak load, record # of comments, etc.
I suppose the up/down vote count will tell you if anyone agrees with me.

I feel the forum has made this a grand Olympics

This site has very much added to my enjoyment/understanding of the Games. The stories are excellent and the comments have added inside information. Well done.

It didn’t crash repeatedly under load this time! 👏👏

Agree with above comment. Would also be interesting if swimswam had a “message board” where commenters could create their own threads/topics for others to comment on.

If only there was a way of getting rid of some of the posters here with comments that are often rude, aggressive and disrespectful.

And the analysis podcasts! Top notch!

Another minor medal maybe?
Or Fourth ?

Fresh they’d be a real gold chance ….2 backing up ladies…..nope …..Chalmers with be 7 secs back chasing the Brit girl.

At this point of the meet, is anybody still fresh? I think everyone on these relays is at the point where they have to dig a little deeper for it.

I had a lot of misplaced faith in MA in the IM.
He will not final in the 50.

Murphy or Jacoby better not be on it. But Dave Durden is pushing for Murphy. Smith-Fink-Dressel-Weitzeil OR Smith-Fink-Huske-Dressel. I’d go the first option because Huske hasn’t swam in a week and form isn’t known.

Interestingly each of those combinations estimate to very similar times. 3:37.2 v 3:37.3 if Regan and Abby hit their times from earlier relays @ the OG’s and other 3 swimmers are half-second better than their PB’s

Dressel has never been 0.5 faster with a relay start.

I love these two line ups. But the women’s 50 free semi is immediately before the mixed medley, so the 2nd option seems better.