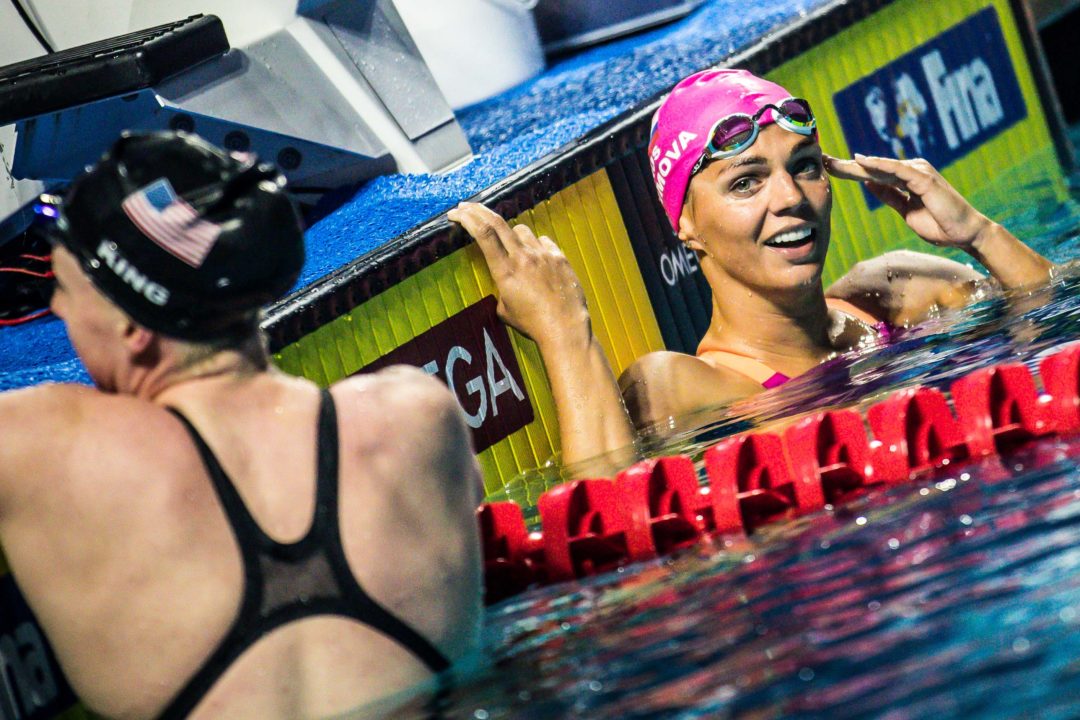 World Record holder King of the USA and Russia's Efimova placed 1-2 in the 100 breast at the Rio Olympics. They hold the fastest 100m breast times since 2016. Archive photo via Jack Spitser/Spitser Photography

One of the most well-known rivalries on the Olympic swimming stage is between Team USA’s Lilly King and Russia’s Yulia Efimova, the top two swimmers in the 100 breast since the 2016 Olympics.

In Rio, Efimova won the first 100 breast semifinal and wagged her finger to show the number “one.” This was amid her own doping controversy (she had had two doping infractions during her career and was cleared to compete in Rio the day of the 100 breast prelims race.)

King won the second semifinal two and wagged her finger in response. She explained the move to an NBC reporter: “You wave your finger number one and you’ve been caught drug cheating…I’m not a fan,” King said.

King won gold in the event about .60 ahead of silver medalist Efimova. Team USA’s Katie Meili, who has since retired, won bronze. Lithuania’s Ruta Meilutyte, the World Record holder before King broke her record in 2017, has also retired.

Efimova and King are set to showdown in this event yet again in Tokyo. Their most recent duel was at the 2017 World Championships where King blasted the World Record time of 1:04.13 to win gold. Efimova swam a 1:04.36 in the semifinals, but finished 3rd in the final after Meili with a 1:05.05.

King will be racing the 100 breast and 200 breast while Efimova is only scheduled to race the 100 breast, according to Russia’s Olympic roster. The two-time World Champion already said she would be focusing on the 100, though, back in May.

For example, 17-year-old Lydia Jacoby of Team USA earned her spot among the top breaststrokers in the world by posting a 1:05.28 at the U.S. Olympic Trials in June. She will represent the U.S. alongside King in Tokyo.

Jacoby grabbed the world’s attention when she raced King and King’s training partner Annie Lazor at the 2021 Mission Viejo Pro Swim Series in April. She took 2nd place behind King with a 1:06.38.

That was a lifetime best for Jacoby, which she promptly destroyed two months later at the U.S. Olympic Trials with a 1:05.28.

They are ranked 1-2 in the world this season:

This season the 100 breast has been a relatively American-dominated event. Note that USA’s Lazor and Bethany Galat will not contest the event, although they are among the top 10 fastest 100 breaststrokers since the Rio Olympics. Lazor will compete in the 200 breast alongside King in Tokyo.

At the recent European Championships in May, Sweden’s Sophie Hansson showed her dominance in this event by winning gold with a time of 1:05.69. Arianna Castiglioni of Italy won silver (1:06.13) and her teammate Martina Carraro claimed bronze .09 after her.

While Castiglioni posted a lifetime best time of 1:05.67 at the 58th Sette Colli meet, she will not be swimming this event in Tokyo. She is qualified only for the 4×100 medley relay.

Instead, it will be 50 breast World Record holder Benedetta Pilato and Carraro in the individual 100 breast. 16-year-old Pilato’s season-best 100 breast time of 1:05.84 is just .02 faster than Carraro’s.

Together they make up one of Italy’s first domestic breaststroke fields. Italy did not make the semifinals in this event at the 2016 Olympics.

South Africa’s Tatjana Shoenmaker is ranked 6th in the world this season and this will be her Olympic debut after RSA did not bring women to the Rio Olympics for swimming.

She set about crushing all six South African National records in breaststroke events in 2020 and 2021, taking down all three long course records at the recent South African Championships in April.  This includes the 1:05.74 which ranks the 24-year-old 6th in the world this year.

Australia’s Chelsea Hodges is one of only ten women to crack 1:06.00 in the event this season, earning her #10 in the world this year. 20-year-old Hodges helped the Australian 4×100 medley relay to a silver medal at the 2018 Youth Olympic Games.

Dark Horse: Tang Qianting (CHN) – Qianting had a phenomenal meet at the first Chinese Olympic Trials in May, by becoming the second all-time fastest 100 breaststroker in Chinese history. She posted a time of 1:06.04 to be ranked 11th in the world this year going into the Olympic Games. It took a 1:06.73 to make the Olympic final in Rio and Qianting has a solid chance of edging someone out for a spot in the Olympic final in Tokyo.

King, Jacoby, Pilato, Carraro, Schoenmaker and Hansson should all make the final and then there are at least a 16 women (Vasey, Efimova, Chikunova, Fast, Jefimova, Elendt, Carraro, Mamie, Hodges, Tang, McSharry, Strauch, Watanabe, Aoki, Gorbenko, Wog) contending for the remaining 2 spots. I think there is a good chance that it will take 1:06 to get out of the heats.
In my opinion the medals will be between King, Jacoby, Pilato, Hansson, Schoenmaker, maybe Efimova, maybe Chikunova and maybe Jefimov.

Not sold on Efimova this year, she hasn’t looked right and will need a huge turnaround to be in the picture for medals.

I think that Efimova’s sub-par times are just a result of the lack of racing due to COVID, I think she will definitely go faster, but I would say she has a 10% chance at most at winning gold.

King has to be clear favourite. Maybe not untouchable but either she’ll have to be off and/or someone drops massive time for her not to win

Efimova will be either be podium …. or nowhere. Don’t ask me which one we’ll see.

Whilst I’m seeing talk of Jacoby pulling an upset; I’m not fully sold. She’s already pulled a major drop to get where she is; its no given thing that another is a pure matter of course. I certainly do see her as a podium contender and if King IS off her game, then she’s certainly in the game.

I think Pilato could go anything between 1:04.0 and 1:07.0 and I wouldn’t be particularly surprised.

She could be ready for a big drop.

Y’all sleeping on Schoenmaker and Hansson. I’m worried Jacoby might succumb to the pressure of her first Olympics!