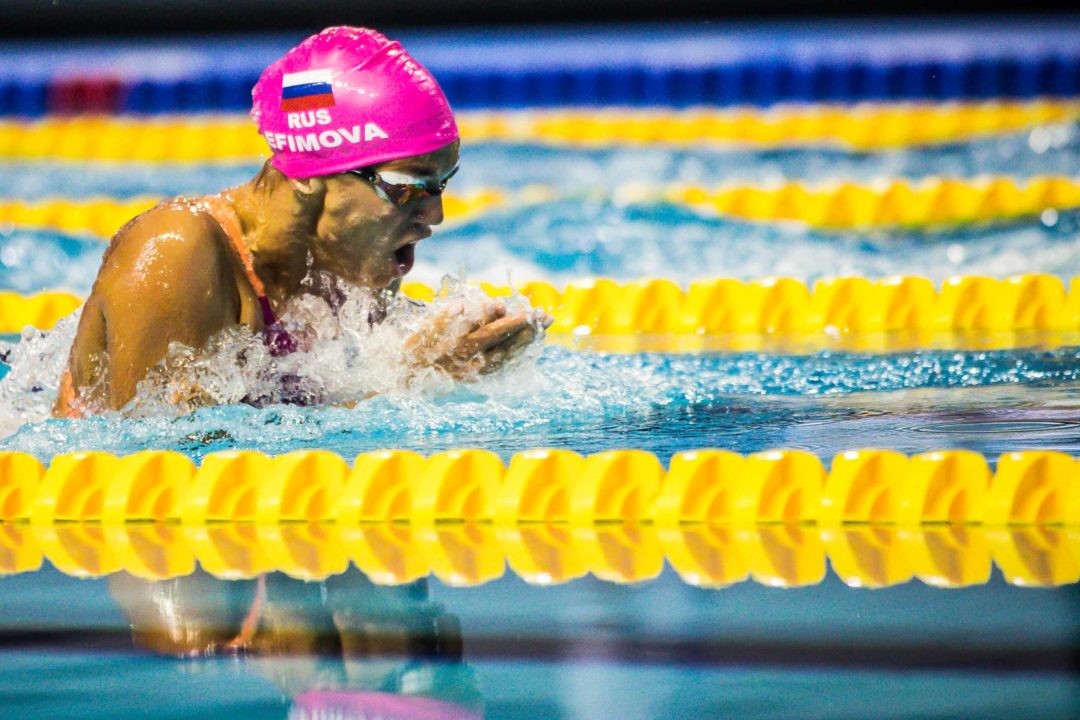 An interview with Russian National Team head coach Sergey Chepik in the All-Russia Swimming Federation newsletter this week seems to confirm that Yulia Efimova will stick to just the 100 meter breaststroke for the upcoming Olympic Games.

The 29-year old Efimova is the two-time defending World Champion, and three-time World Champion overall, in the 200 breaststroke in long course meters. One of the more surprising results from Russia’s Olympic Trials in April, though, was when she finished just 3rd in that event in 2:24.16. That meant, in theory, that she would lose the Olympic spot to 16-year old Evgeniia Chikunova (2:21.63) and Maria Temnikova (2:22.76).

Without the same obvious path to a vacant spot, it appears as though Efimova is content to focus her efforts on the 100 breaststroke instead.

But Chepik says that Efimova indicated that she considered pulling out of the 200 breaststroke even at the Olympic Trials meet. He believes that she can do more in the 100 by focusing on that race.

Efimova was the 2016 Olympic silver medalist in both the 100 and 200 breaststrokes, and finished 2nd behind American rival Lilly King in the 100 at the 2019 World Championships.

While Chikunova won the 100 breaststroke at the Russian Olympic Trials as well, a full-strength Efimova is still expected to be the country’s top contender in the shorter distance. The Russian women qualified a 400 medley relay for the Olympic Games, but finished in just 12th place to miss a spot at finals at the World Championships.

If Efimova can come up to speed in the 100 breaststroke, Russia does have an outside shot at a medal in the medley relay – thanks in part to improvements by Maria Kameneva and Arina Surkova.

Other Highlights from the Chepik interview:

Too bad. I wanted her to push away better performing young swimmers using her connections and then to fail miserably not even making the final in 200BR.

All these moments of hating on Yulya takes time away from your devotion to Katie.

Do you know what are the roots of this hate? She doesn’t give a sh.t to what me or you or anybody else value in this sport. She cheated with drugs twice, lied uncountable number of times and didn’t miss anything with that “punishments”: nor major meets, no training environment in sunny California, nothing. She is laughing in our face and despise all these miserable “lovers of fair sport”.
And, yes, my feelings of getting her out are stronger than my admiration of Katie Ledecky.

I always wonder, does Yozhik know Yulia? I actually met her training recently and nothing spoken negatively about her seemed true – in fact she seemed quite depressed and disappointed in all the scandals and fall out.

Whether the cheating is legit or not (it certainly could be) she actually seems like a pretty kind lady.

Oooooh How could I have been so right ?

I’m sure a lot of people have thought of this, even tho its an unpopular opinion- Efimova has been just as consistent as Pellegrini over the last past 10+ years, all she’s really missing is Olympic gold.

And she won’t get it

what’s impressive is that she has been on the World podium since 2009 and you can’t find anyone who had been around for at least half that time at that level.

Yulia is the goat.