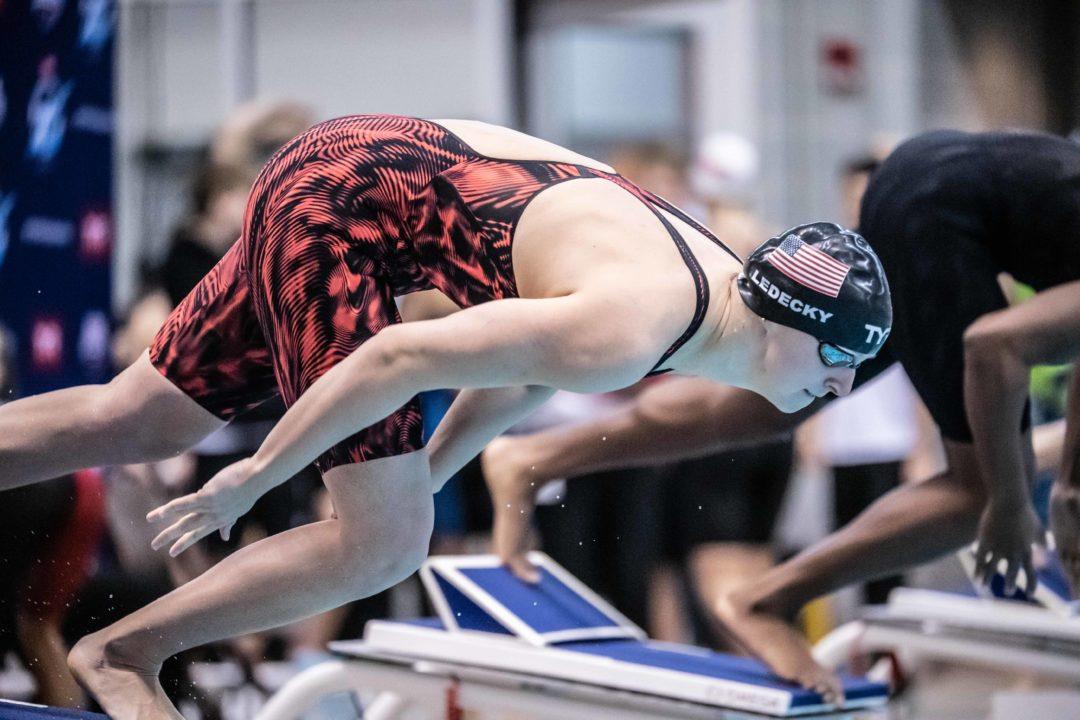 Today would have marked Katie Ledecky's 200 free/1500 free double at U.S. Olympic Trials. And Luca Urlando had a shot at history as an 18-and-under. Archive photo via Mike Lewis/Ola Vista Photography

It’s a Stanford 1-2: Katie Ledecky bruises her way to a win in 1:54-low, showing a solid commitment to speed coming off a 1:54.5 in season at Des Moines. Teammate Simone Manuel is 1:55-high to best a strong field for the second individual spot. That’s a career-best for Manuel, and starts to drum up some buzz for just how fast she could go in the sprint freestyles later this week.

Coming off a big relay split at Worlds last summer, Katie McLaughlin makes her first Olympic team here as a relay member, overcoming a narrow miss in the 100 fly. Rising collegiate star Paige Madden (who in this timeline won the NCAA title in March) rounds out the top relay foursome.

We get our first 18-and-under man to make the U.S. Olympic swim team since an 18-year-old Larsen Jensen in 2004. Luca Urlando wins the 200 fly final, lowering his own NAG record to a 1:53-low. The recently-graduated high school senior wins by more than a second and a half.

The second qualifier is somewhat of a dark horse: Louisville’s Nicolas Albiero. The college junior had gone from 1:58.1 to 1:56.0 over the past two long course seasons, and dropped from 1:40 to 1:38.6 in short course yards in February, so a long course breakout tracks with that improvement rate.

Coming off a 2:09.0 in Des Moines, Melanie Margalis is unstoppable in the IMs, winning her second event of Trials with a lifetime-best 2:08-low. After taking fourth at Worlds last summer, Margalis is on the warpath for her first individual Olympic medal.

The newest Olympic event is a glorified victory lap for Katie Ledecky, who went after the 200 free earlier in the session and does only what she needs to to secure a win here, coming in a bit behind her prelims time.

Behind her, Erica Sullivan‘s decision to delay her NCAA career pays off, as the 19-year-old goes 15:49 to move into the top 12 performers of all-time and make her first Olympic team.

I really wanna see Adrian make the team for probably his final time. It’s going to be extremely hard against this field though

Speaking of Adrian, I think now he has the record for most consecutive years swimming a sub 22 50 free. This is his 12th year doing that. Last season was his 11th time https://swimswam.com/nathan-adrian-rips-sub-22-50-free-for-11th-consecutive-year/ and he was tied with Fratus and Cielo for that “record.” Even with all the meets cancelled, he managed to swim a 21.88 at the Des Moines PSS. #consistency

No Erika Brown in the 200 freestyle? Seems strange after a few great in-season swims?

Without the short course turns its a bit of a stretch but I wouldnt rule her out yet. The 100 is her sweet spot.

I don’t think Simone will swim 200 free individually. The relay works with her schedule but there is no point in swimming 2-3 rounds of the open 200 free without a legit medal shot when you are focused on repeating as 100 free Olympic Champion and pushing the world record.

Wait…if you finish 2nd in the 100/200 but you don’t want to swim individual, but you want to swim the relay, is it possible to just get a relay spot and let the 3rd place swimmer get the individual spot?

Phelps did this in 2012 – deferred his 200 free spot which moved Berens to individual and allowed them to add Tarwater to the team as the 7th place finisher.

Correction: 2013 Phillips 66 National Championships. I do not wish to offend any of USA Swimming’s sponsors.

I agree with this. I don’t see the point of her going all the way to the finals. She does need to swim it once if she wants to be on the relay. But also remember they have a mixed relay now which would give her an additional event so she can still get a 5 medal performance.

Ella Eastin for both IMs.

Definitely cheering for her! But I don’t feel that sure with so many contenders that seem to have a better chance. Or maybe she just hasn’t had her breakout swim yet. Still, she would be a pretty uncertain factor.

What I have realized thus far is how front-loaded Ledecky’s OT schedule will be, and how back-loaded Dressel’s will be.