Roadmaps – Mapping the Journey of US Swimming Stars: Women’s 200 Fly 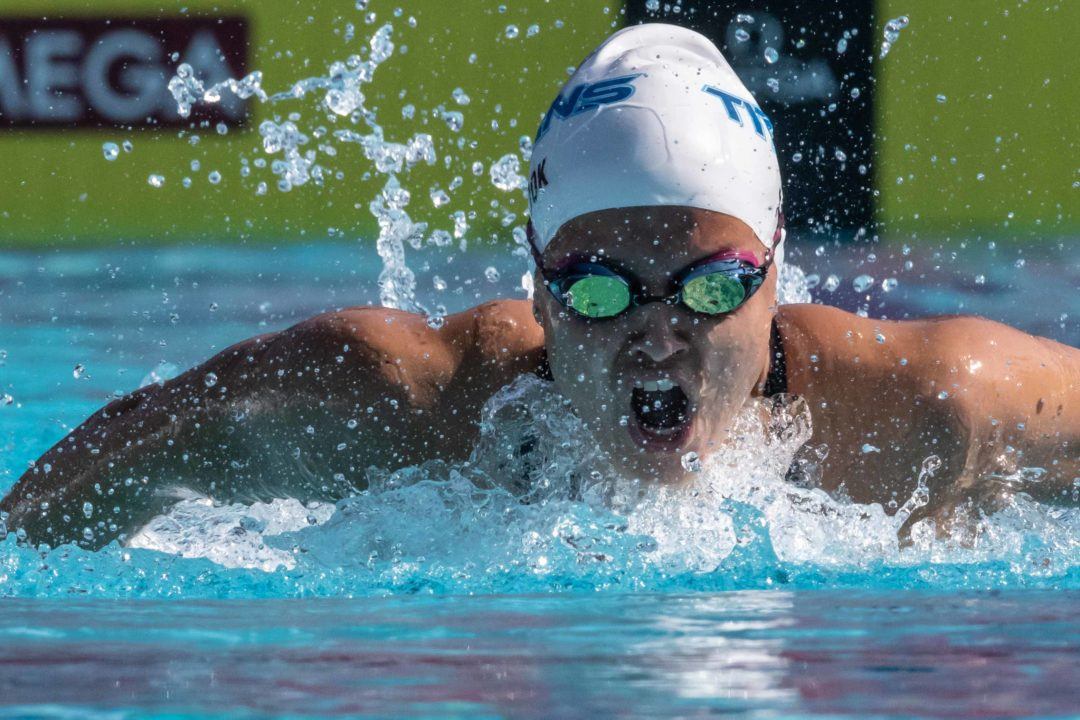 Mary T. Meagher's 80s NAGs and Mary Descenza's 2009 American record remain unbroken today. Who's been close to breaking the marks? Could they ever go down? Stock photo via Mike Lewis/Ola Vista Photography

At the 1981 U.S. Nationals, Mary T. Meagher broke her World/American Records in the 200 fly for the last time at the age of 16, clocking in an impressive 2:05.96. Roughly 19 years later, Misty Hyman finally took down Meagher’s 200 fly American record with a 2:05.88 at the 2000 Olympics. It was another 9 years later when Mary Descenza demolished Hyman’s American record with a 2:04.14 at the 2009 World Championships during the polyurethane super suit era.

Who’s Been Close to the American Record?

All three of Mary Descenza‘s 2:04 swims in the 200 fly, including her 2:04.14 American record, came from the 2009 World Championships where she wore a full-body polyurethane suit. After that Worlds meet, Descenza did not swim another sub-2:07 performance in the 200 fly. Since then, no American woman has broken 2:05 in the 200 fly. But who has been close?

In the last decade, the American women’s 200 fly experienced a lull in this event, with Cammile Adams being the only consistent finalist at the international level in the event. Now, there’s a plethora of young talent rising to the occasion, and that youth will probably generally benefit from the extra year before the Tokyo Olympics.

With the Olympics pushed an extra year, that leaves an extra year of training for this group. Who’s to say that the American record couldn’t go down at the 2021 U.S. Olympic Trials? However, with the uncertainty of COVID-19 and the wide margin that separates current swimmers from the mark, will the women’s 200 fly American record ever go down?

What a thorough article! Thank you, Mr. Pecoraro.

Well, these articles are very interesting for the names, histories and comparisons. Having said that, haven’t we learned that swimming is not linear and results are essentially unique to each individual swimmer? I challenge anyone to find even 2 swimmers of any level whose progressions track each other over any 3 year period with a high enough correlation to be meaningful. Fun and interesting, yes. Predictive value extremely low…..

Those calculating methods make me feel uncertain for some reason it feels like you’re assuming something. It is extremely unlikely that these swimmers will drop at this rate but I feel like at least one of them will be great in the future.
Who will break these records? My guess is someone I don’t even know will. Probably in a few years or more.
When I was reading about the American record I started thinking about the possibility of a swimmer, like one of the current stars in the 200 fly, breaking 2:05 in the more recent years. Maybe not even an American. If anyone breaks 2:05 that would be great.

Because 200 fly is considered one of the most torturous events, do you think the lack of progression is due to the lack of swimmers swimming it?

I personally don’t think that’s the cause. I think most swimmers would argue that at that sort of “elite” level that every event can feel sort of “torturous”, just in very different ways. I never was at the Olympic level, obviously, but when I was competing at the elite NCAA level, I personally always thought the 200br was the most torturous event (and I was a 400IMer), but that’s obviously a matter of personal opinion. I also thought the 200fr felt much harder than the 200fly. I liked in the 200fly, you could get into a sort of rhythm. So, I think while yes, when swimmers are starting out, butterfly feels like the most daunting stroke, and the 200fly (and… Read more »

No Katie McLaughlin included in this? I would think that she’s a contender next summer if she decides to swim this, went to worlds in the event back in 2015 as a teenager.