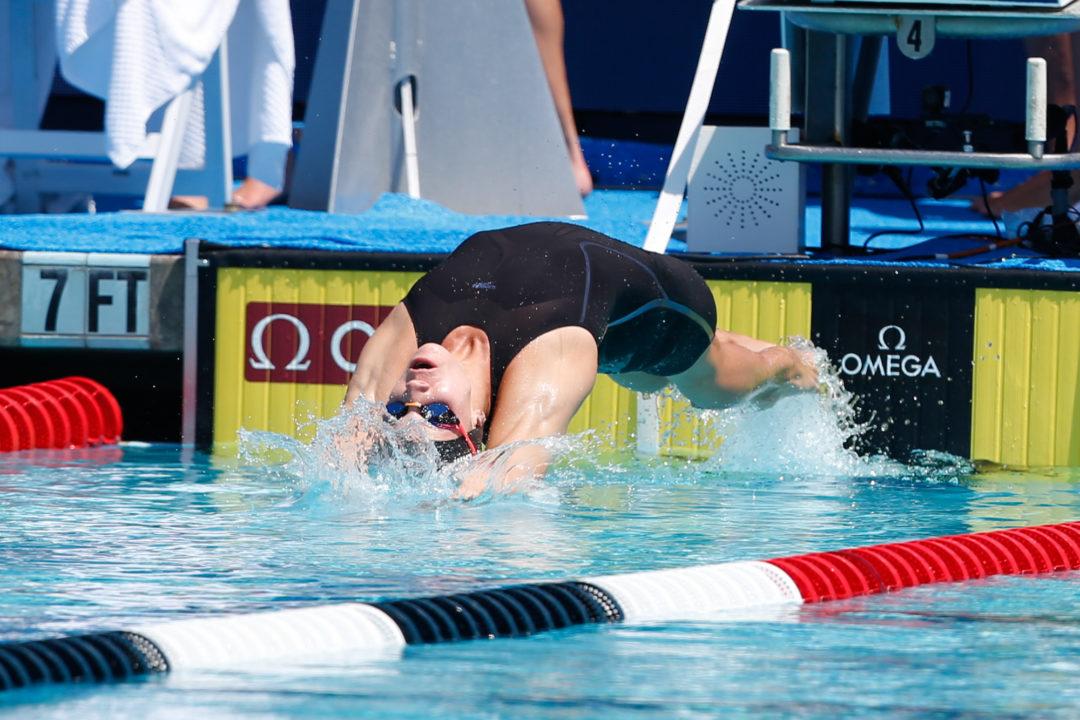 It’s the first relay selection event of Trials, and a talented field does not disappoint. Blake Pieroni holds up his top spot from the semis with a 1:45-low. It’s a much more strategic final, and times are a little slower than semis as placement trumps times in importance. 2018 national champ Andrew Seliskar is the other individual qualifier with a career-best in the 1:45-mids.

Zach Apple and Townley Haas round out the top relay foursome. Haas leads most of the way and it takes Pieroni, Seliskar and Apple until late to pass him up. Caeleb Dressel, expected by some to scratch this event, does contest it, earning a prelims relay spot that actually probably suits his overall Olympic lineup best. Fellow Florida Gator Kieran Smith is sixth.

It’s shocking – not that Regan Smith wins, but just how fast she goes. The 18-year-old obliterates her own world record, becoming the first woman ever under 57 seconds with a 56.9. That’s a game-changing swim for a swimmer who already changed the game a summer ago. The trajectory actually supports such a video-game-like time. Smith went from 58.8 to 57.5 over just the 2018-2019 season alone. She went 58.1 and 58.2 in pretty ordinary in-season swims in January (Knoxville PSS) and March (Des Moines PSS). Smith has her first Olympic berth and becomes an instant frontrunner for Swim of the Meet.

Behind her, the former world record-holder, Kathleen Baker, holds off a youthful field for the second Olympic spot. Baker is finally healthy again after an injury-riddled 2019, and goes 58-low for her second-best career swim.

Ryan Murphy takes care of business, going 52.0 to finish just off of Aaron Peirsol’s U.S. Open record. Murphy appears to have one eye firmly fixed on the Olympic Games, and his finishing 15 meters look extremely relaxed.

35-year-old Matt Grevers holds off the field for second, becoming the oldest projected member of the U.S. Olympic swim team (so far) and avenging his third-place finish in 2016.

Her Indiana training partner Annie Lazor cracks 1:06 for the first time and joins King on the Olympic team. That means in two breaststroke events so far, pros training out of IU have earned three of four Olympic spots.

This is honestly so depressing. This would have been the fastest year in swimming since the 2008/2009 era. Brutal.

Yeah. It looked like everything was going right for a lot of great swimmers…until everything started going wrong.

Without Phelps taking up a bunch of spots, I wonder if the team size limit (26 male / 26 female) will come into play. Swimswam’s fantasy trials has 13 and 10 swimmers qualified after day 3 (and no relay events yet for women).

I believe that the 6 relay spots in the 1 & 2 Fr make the team before the second place finishers in the other events.

I feel like if they needed to clear space they would start by bringing only 4 swimmers per relay and 1 swimmer per individual event and adding individual swimmers based on maybe the quality of their swims, then the prelims-only relay swimmers. I’m kind of clueless here honestly. I only remember what they did for 2019 jr worlds and I’m pretty sure it won’t be the same for the Olympics.

Good observation… something that will be coming up in future installments this week!

Could this lead to unexpected people like Murphy, Seli, or Kieran being asked to swim the morning session of the 400 free relay? I hope not, I want to see four guys with low/mid 47s duke it out for the right to join Dressel and whoever gets #2 at trials in the final.

US usually has the depth to grab someone from the swim team for the prelims of any relay (like an IMer)…..though this can be a little dangerous at the Olympics!

Murphy and Casas. I’d be willing to put my life on this one, but good luck to everyone and may the best two win 365 days from now.

Casas is the real Most wanted upcoming talent – so its fair to think he would take second behind Murphy .

Haas just taped this article in his locker. Now he’s going 1:43.9. Watch out!