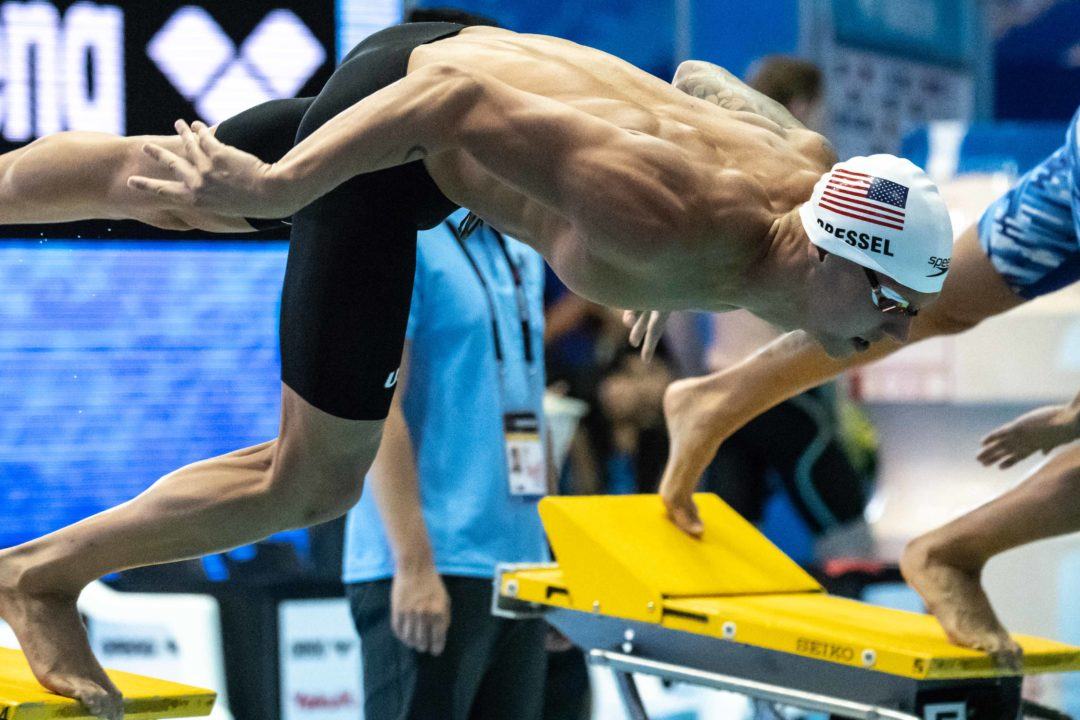 Day 5 would have been a banner lineup, including Caeleb Dressel and a deep 100 free field that was perhaps the most anticipated event of Olympic Trials. Archive photo via Mike Lewis/Ola Vista Photography

The Trials That Would Have Been: Who Would Have Made the Tokyo Olympics Today?

In an alternate timeline, we’re all just starting a week with our eyes and minds glued to live results pages from Omaha at the U.S. Olympic Swimming Trials.

The U.S. Swimming Trials represents just one of the pieces of the overall Olympic puzzle that has taken a different shape in light of the COVID-19 pandemic.

The growing storyline on the men’s side is a distinct lack of double-event qualifiers, which could potentially prevent the U.S. from taking every qualifying athlete. (The 5th- and 6th-place qualifiers in the 100/200 frees would be the first left out, followed by second-placers in individual events).

Zane Grothe does his part, becoming the first dual-event winner on the men’s side with a 7:44 in the 800 free. That’s not a career-best time for Grothe, but it’s right in the ballpark with what he went in 2018 to qualify for Pan Pacs before going 7:43 at the Pan Pac meet itself.

Florida’s Bobby Finke had a disappointing 400 free on day 1, but he more than makes up for it with a career-best 7:45 for second place and a spot on the Olympic team.

It’s a loaded field of guys who have been 2:07 at least a few times in their careers – but it all comes down to who does it in the final. 100 breast winner Andrew Wilson hit the 2:07s twice in late 2019, and he does it again to join Grothe as a double-event winner so far this week. Second goes to Will Licon (2:07 at Pan Ams in 2019), who surges home past charging youngster Josh Matheny.

A switch in training bases pays off for Hali Flickinger, as the Georgia alum/ASU pro group flyer goes 2:05-low. That marks a third-straight season under 2:06 for Flickinger, who returns for her second Olympics after finishing 7th in Rio.

What was once considered a weaker event for the American women has become a strength. Defending world champs bronze medalist Katie Drabot battles with superstar backstroker Regan Smith for the second spot, and it’s Smith who adds another event to her lineup in 2:06-low.

It’s been weird seeing Caeleb Dressel‘s name at the bottom of the qualifying priority list so far this week. His primary events are mostly backloaded in the Olympic event order, but he finally gets to claim a big win on day 5. Dressel exactly matches his semifinals time (47-low) down to the hundredth, tying the U.S. Open record, though he doesn’t appear to be fully rested.

As much as we all want to see an entire field go sub-48, it’s just too difficult for the outside lanes fighting off the waves from Dressel’s unmatched speed. Zach Apple and Blake Pieroni grab the other two primary relay bids in 3rd and 4th. Veteran Nathan Adrian extends what has been one of the steadiest careers in recent memory, making his fourth-straight Olympic team as a 5th-place relay qualifier. And the SwimSwam comment section is thrilled when Harvard’s Dean Farris fights his way onto the team in 6th.

This is so sad and so fun.

I can’t wait for the mens 4×200. Three names for me; Kieran Smith, Elijah Winnington, Matthew Richards. Three huge talents; I say whichever steps it up to the big time next summer wins their country gold.

This is the oddest series of articles I’ve ever seen on SwimSwam. Isn’t there an unwritten rule not to focus on what could have been or should have been? It’s more surreal than anything else that Olympic trials has been reduced to speculation about a trials that never occurred, like waking up in a bad dream. I guess this is the best we can do with no real swimming events to cover. Not blaming anyone, just saying it’s weird. Can only imagine what it feels feels like to be one of the athletes who just misses the team, or worse who makes the team in this virtual competition but misses it when the real trials eventually occurs.

One needs a distraction to pass the COVID-19 time away.

I could see Dressel getting 2nd, only cause he tries to save some taper for the Games.

The pool salinity spikes after each heat of the men’s 100 free, as incredibly fast swimmers cry realizing they will not be going to Tokyo.

YESSSS FARRIS!! LONG LIVE THE KING! In all seriousness, I think your predictions are spot on, especially the 100 free. I like the 200 breast predictions, also. Wilson is looking dangerous, and Licon’s ISL season (the 200 breast especially) was very good.

(continued) After that, an insane person in the stands starts screaming, “The coach is insanely fly! Where are the doping kicks? USRPT is a slow commentator! The relay has ruined USA men’s free! USA women’s back will be breaststroke! They need to not use FINA on the 1500 violin!” The person reveals their identity as Bobo Gigi.
Dressel suffers from shallow water blackout in the warm-up pool, but he receives proper medical attention and survives.
The Mona Lisa is extracted from a lane line.
The touchpads suddenly turn into sweet potatoes.
Jack Spitser gets a rare photo of Zach Apple eating an apple.