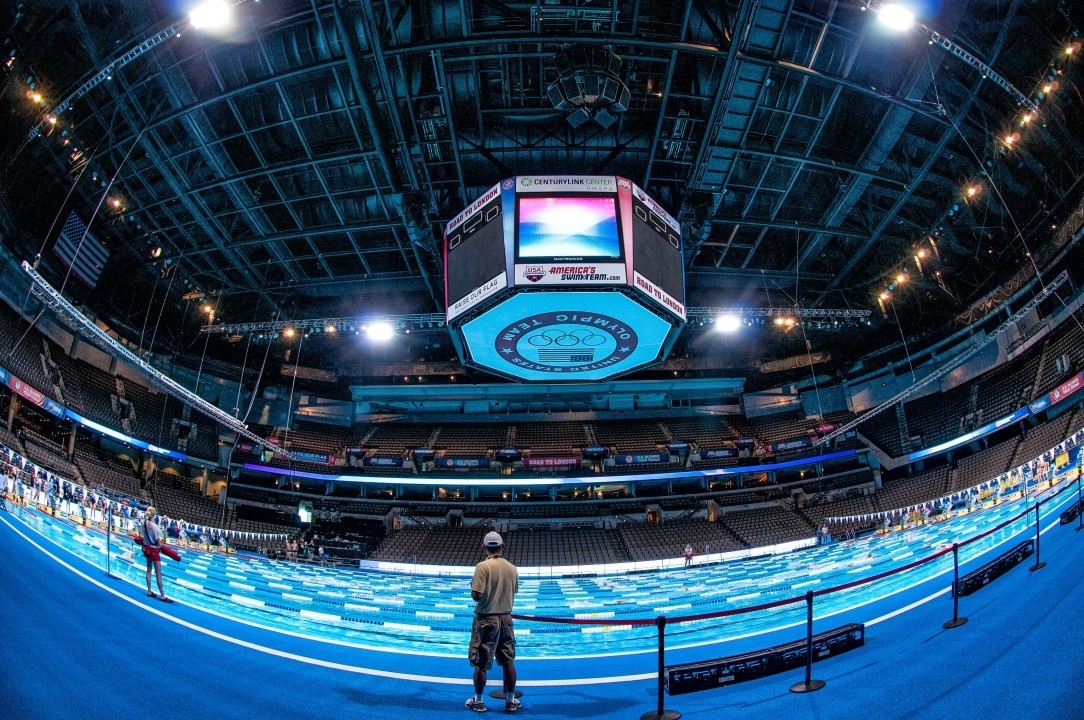 The SwimSwam staff would've been perched in the media section by the gleaming temporary Myrtha pool in Omaha, the air electric with anticipation. Stock photo via Mike Lewis/Ola Vista Photography

The 2020 U.S. Olympic Swimming Trials were supposed to begin today.

Among the events initially slated for night one of the pulse-pounding meet in Omaha, Nebraska, were finals of the men’s and women’s 400 IM and the men’s 400 free. The SwimSwam staff would’ve been perched in the media section by the gleaming temporary Myrtha pool, the air electric with anticipation. America would’ve been ready to meet the 2020 U.S. Olympic swim team, one race at a time.

We would’ve known who the 2020 NCAA Champions were, and we would’ve seen how those college swimmers folded back into the national long course rankings over the course of the spring. We would’ve had Pro Swim Series stops in Mission Viejo in April, and in Indianapolis in May, and at any last-minute local meets in June to see where the best American athletes were at before the big show. We were ready for 2020.

Of course, none of that has gone to plan due to the COVID-19 pandemic sweeping the world.

In a way, many have adjusted to the current state of things; we have new routines at home, Zoom calls have replaced social events, and swimmers have either found a pool to train in or shifted fully to dryland. What was once a March filled with anxiety on scales big (is the world ending?) and small (is NCAAs happening?) has been replaced with a more amorphous era; we are all waiting for ‘normal’ to come back, in whatever form that will be. We don’t know when it will be, or how it will look, but we definitely have become very familiar with waiting.

On the bright side, we will get another Olympic Trials. For now, it looks like we’re only facing a year-long delay; we’ll get our 2020 Trials and 2020 Olympics, just in 2021.

But we may be faced with no 2021 Trials and no 2021 Olympics. It’s our next big swimming-related fear, one that involves not a delay but a complete cancellation, a type of fear that was realized not too long ago when NCAAs were called off.

I refuse to use the tired word ‘unprecedented,’ but this is an extremely odd, scary and new situation for many. Most, if not all, American swimmers who were set to compete this week at the original 2020 Trials have never faced such a flat-out cancellation. As far as the U.S. is concerned, Trials and the Olympics have been running as scheduled since 1980 when the Americans boycotted the Moscow Games; this pandemic is a new hurdle for this generation of swimmers to jump.

When it comes down to it, fans of the sport, of Team USA and of individual athletes have it easy. Swim fans can, by definition, only enjoy sport and cultural events like major swim meets indirectly, as third party spectators. This is what fans do. There is plenty of disappointment to go around, to be sure– nobody likes the idea of something as big as the Olympics or Olympic Trials being screwed with. Nobody wants them to be canceled.

But we’re swimming fans. At best, we get a great show at a major meet. Records are smashed, dreams are made. At the worst? The meet doesn’t happen, and we have our lives, however altered as they may be by a global disaster, to get back to.

This delay has already affected swimmers who are late in their careers or had planned for their post-swimming lives to begin this fall. Training for the Olympics is grueling. It is very hard to financially support a pro swimming career; more often than not, it can be incredibly draining. There are sacrifices that factor into this equation, and many swimmers bear the burdens of these sacrifices because of the small, but fruitful, promise of Olympic glory. The promise of a lifelong goal accomplished.

That promise is embedded in the very ethos of the Olympic Trials, a meet which creates such a special moment for the swimming world every four years.

In the end, it’s not all doom and gloom. Swimming has had it tough lately, and the next year or so could be very demoralizing. But while we process this delay, we are also reckoning with a pandemic. We have people taking to the streets to demand change that this country desperately needs. We are in the midst of a massive human moment.

So we can feel bad about not getting to see the first night of Olympic Trials tonight, but there is also so much else to focus on in this world today. Swimming will be back.

You heard it here first…the Olympics will be cancelled. No one wants them to happen more than me, but with no vaccine, I dont know what choice there will be.

We all need to learn to live with the virus, vaccine or not. Protect the vulnerable, take reasonable precautions (including masking), but in my opinion we should avoid returning to shutdowns, etc.

Too early to call it. I have no idea what’s gonna happen (almost cliche now) but the best thing we can do now is stay hopeful, and don’t assume anything.

I said In Feb that Tokyo 2020 had a 30% chance . I don’t see the odds better one year on when the economic impact could be recessions , more inequality & nations descending into dysfunction . Japan is the key but I don’t get that they want it .

This happens every 40 years – 1940 the 2nd World War cancelled the Games, then 1980 with the Cold War boycotting Moscow & now 2020 a world pandemic! As I have been coaching over 40 years I live in hope and whilst not training potential world champs at present I would still insist, inspire, & initiate smart sessions swapping sets & swimmers with other coaches in order to keep them enjoying their favorite sport. Then if the Games were to go ahead they would be fresh but still fit in order to knuckle under for the countdown planning. The medals will be won by a different breed than had they gone ahead this year.