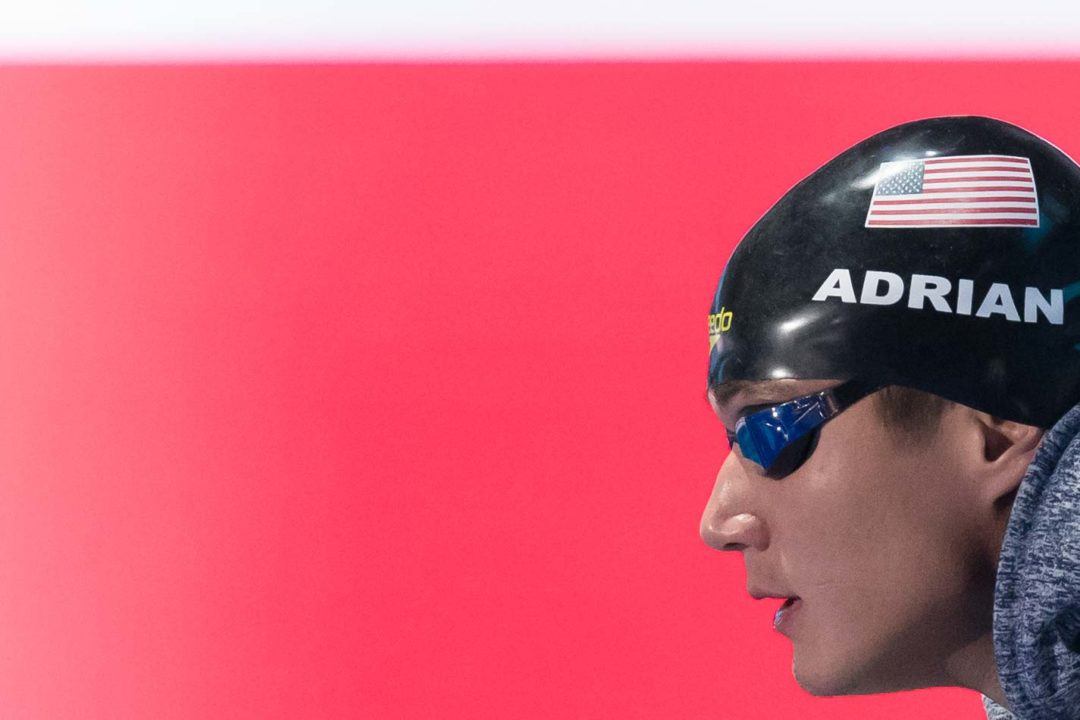 The veteran Adrian joins a very select group of sprinters to reach this level of speed, consistency and longevity in their careers. Archive photo via Mike Lewis/Ola Vista Photography

With his back against the wall, at risk of missing the upcoming United States National Team for the first time in over a decade, American sprint stalwart Nathan Adrian threw down a 21.87 50 free Friday night in Lima, Peru, at the 2019 Pan American Games, to take silver. The time ties him with Ryan Held for No. 3 in the nation this season; he must only remain in the top six swimmers nation-wide through August 25 to secure his 2019-2020 spot.

It was his first time under 22 seconds in the event this season, and by achieving the feat, he extends his streak of swimming a 21-point 50 free at least once per year to 11 years.

The veteran Brazilian duo of Bruno Fratus and world record holder Cesar Cielo appear to be the only other swimmers to have an 11-year sub-22 streak – Cielo’s from 2007-2017 and Fratus’ 2009-present. However, world rankings can be unreliable, so it’s possible (but quite unlikely) that there are others.

Others, notably Anthony Ervin, have hit 21-point swims more than 11 years apart (Ervin in 2000 and 2016), but did not do so with the consistency of the aforementioned.

Adrian, 30, is less than eight months removed from announcing his testicular cancer diagnosis. He underwent surgery in January and returned to racing at the Bloomington Pro Swim Series stop in May. His times this season, remarkably, have been essentially congruent with any other year of his career (though his 50 has dropped off the last three years in general). American sprinters have had a banner year, however, as six men have broken 48 in the 100 free.

Adrian swam at Worlds last month, hitting a 47.08 anchor split on the meet record-setting U.S. men’s 4×100 free relay on the first night. Adrian also anchored the men’s 4×100 medley on the final night in 47.60, but was unable to hold off a jaw-dropping 46.14 split from Great Britain’s Duncan Scott (the second-fastest in history) to seal the win.

2020 might have like every big meet cancelled but he still managed to continue the streak to 12. Legendary.

Nathan Adrian Incredible silver what just likely gold. He do train fully only 4month. He battling cancer with metastazes three locations her abdomen.

Why are world rankings ‘unreliable’?

That’s a question for FINA really. For instance, if you look at the top 50 lcm free times from the year 2010 on their site, you get:

Happy to see this after what he’s been through recently, what a consistent performer and class act

Focusing on the 100 pretty much guarantees him another olympics, individually or in a relay. I do want to see him drop a 21.2 though, but so does everyone lol

Huge and muscular don’t translate to the 50 LCM as much as you’d think. Dressel is strong, but not huge and muscular. Fratus is tiny. Ervin is slight. Cielo is 6’5 and 195. Proud sunk like a rock at Worlds. If huge and muscular were the secret, Josh Schneider would be WR holder.

What an absolute unit.

Adrian is Team USAs Derek Jeter, Captain Clutch at all times. A 21.5-6 could beat Andrews depending on how he prepares