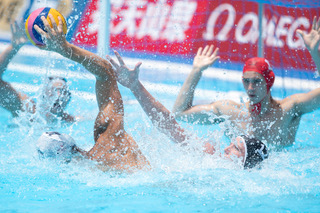 The United States won its seventh straight Pan American Games water polo gold, defeating Canada for the title and securing a spot in the 2020 Olympics. Current photo via “Rafael/Domeyko Photography”

The United States won its seventh straight Pan American Games water polo gold, defeating Canada 18-6 in the championship game. With the win, the Americans secured their spot in the 2020 Olympics in Tokyo.

Brazil rounded out the podium with a 9-6 bronze medal win over Argentina.

Hooper led all scorers with 10 extra-man goals, followed by Bowen (8) and fellow American Hannes Daube (8). Alvarez-Basillo made the most penalty shots (13 of 13), followed by Carales Manzano (6 of 8), Brazilian Gustavo Guimaraes (4 of 4) and Hooper (4 of 5). Carales Manzano and Guimaraes each made nine action shot goals, while Canada’s Matthew Thomas Halajian put in six. Canadian Nicolas Constantin-Bicari was tops in center shot goals (11), followed by Hallock (10), American Alex Obert (5) and Brazilian Luis Silva (5).

In the goal, American Alex Wolf was the strongest in both number of saves (63) and save percentage (70 percent). Mexico’s Orlando Ortega Guardarrama notched 55 saves, followed by Brazil’s Slobodan Soro (52) and Canada’s Milan Radenovic (52).