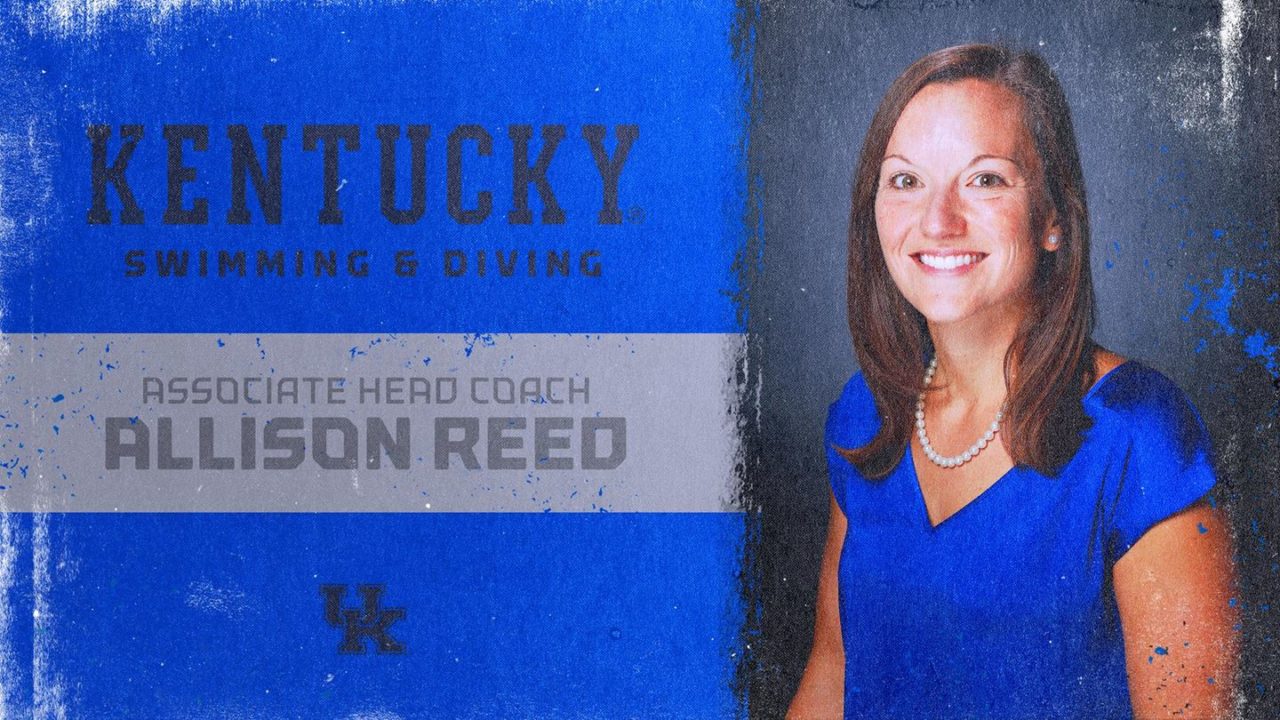 Allison Reed, who has served as an assistant coach with Kentucky since 2016, has been promoted to associate head coach of the men's and women's teams. Current photo via Kentucky Athletics

LEXINGTON, Ky. – Allison Reed, who has served as an assistant coach with Kentucky swimming and diving since 2016, has been promoted to associate head coach of the men’s and women’s teams, it was announced by head coach Lars Jorgensen on Friday morning.

“Allison has been an exemplary leader within our program for three years, and she has worked so hard to continue to elevate the program, both in performance and in recruiting,” Jorgensen said. “She has done an outstanding job while at Kentucky, and this promotion is well deserved.”

Reed served three seasons as the assistant coach for the program, after joining the coaching staff in 2016-17. Reed primarily works with the men’s and women’s breaststroke and IM swimmers, while she also leads the day-to-day recruiting operations for the women’s team.

Reed has been influential during three of the most successful swimming and diving seasons at Kentucky. Eighteen athletes have earned a combined 61 All-America honors during Reed’s stint at UK.

In addition, she saw the UK women earn two third-place finishes at the Southeastern Conference Championships (2017, 2019), tying the team’s best finish at the league meet in program history. Meanwhile, the UK men have improved their points and team standing in each of Reed’s three seasons at the league meet (2017, 2018, 2019).

Reed assisted Jorgensen in training 2020 Olympic swimmer Ali Galyer, an eight-time All-American UK swimmer. Reed traveled to Kobe, Japan, this summer to train Galyer prior the 2019 FINA World Championships, where Galyer recorded a 2:09.98 in the 200-meter backstroke to earn a spot on the 2020 New Zealand Olympic Team.

“I feel so fortunate to work alongside Lars Jorgensen and this talented group of athletes,” Reed said. “Our staff and team have worked hard to build our program into the championship culture we have today. I am proud to accept this new responsibility, and I am excited for what the future holds for UK swimming and diving. Thank you to Mitch Barnhart, Nathan Schwake and UK Athletics for this opportunity. It’s an honor, and go Cats!”

Before arriving at UK, Reed served as the volunteer assistant women’s swimming coach at Ohio State University (2015-16). During her time at Ohio State, the women’s program saw a high level of achievement, finishing 14th at the 2016 NCAA Championships and winning five Big Ten Championship individual titles to finish fourth at the conference meet.

Prior to her stint at Ohio State, Reed began her career in collegiate coaching at her alma mater Wittenberg University (2013-15). Reed spent two years with the Tigers as the assistant men’s and women’s swimming and diving coach and aquatics director. Before that, she was an assistant coach for the USA swimming team and the masters swim programs at Lifetime Fitness in Johns Creek, Georgia.

During her time as a student-athlete at Wittenberg, Reed was a four-year letterwinner and was named team captain during the 2008-09 campaign.

Reed earned her bachelor’s degree in psychology from Wittenberg in 2009 and her master’s degree in criminal justice from the University of Cincinnati in 2010. She currently lives in Lexington with her husband Jordan Leather.

That’s cool and all but have they found someone to replace Derek Perkins yet?