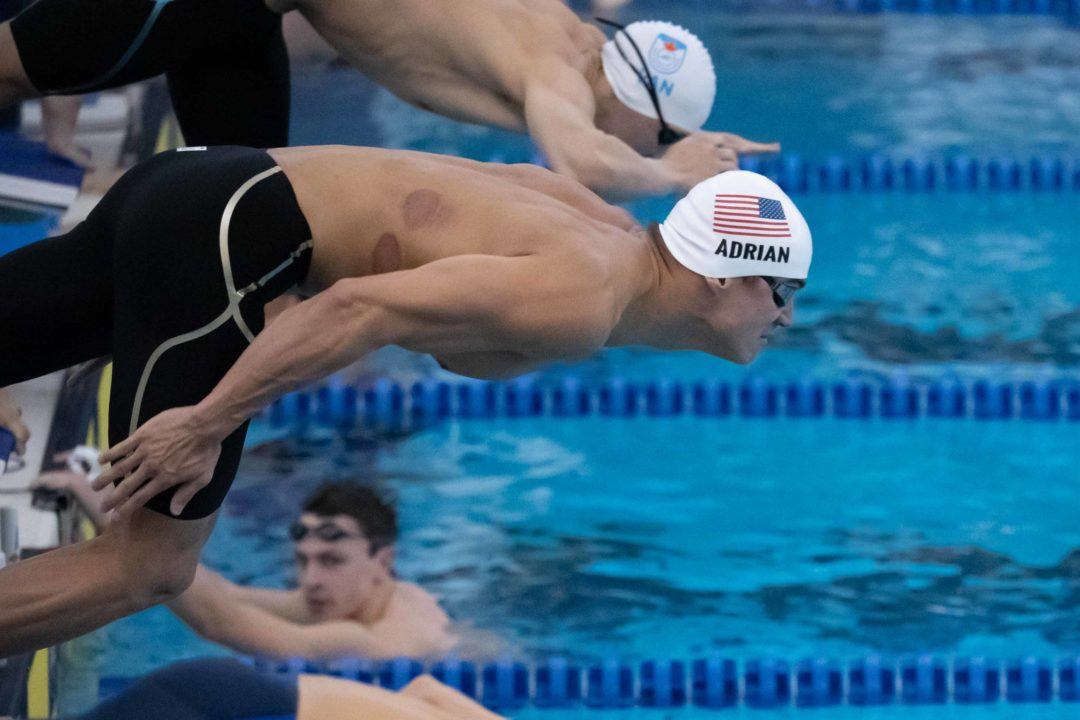 The United States closed out its 2019 Pan American Games campaign with 4 more golds on the final night of competition. Alex Walsh topped the podium in the women’s 200m IM, while Will Licon did the same in the men’s edition, with both the U.S. men’s and women’s medley relays grabbing gold.

All told, the United States swam its way to 44 medals over 5 days, including 21 gold, 15 silver and 8 bronze. They retained their team trophy from the 2015 edition of these Games, where American reaped a far fewer 32 medals at that time.

Multi-individual gold medalists for the United States here in Lima, Peru included Annie Lazor in the women’s 100m and 200m breast and Andrew Abruzzo in the 400m and 800m free. The 800m free was brought into the Pan American Games program just this year.

Daniel Carr also took home 2 individual golds for America, topping the podium in the 100m and 200m back, while Licon’s aforementioned 200m IM was paired with his 200m breast gold medal. Walsh paired her 200m IM victory with a 200m back gold medal as well.

At their home Games in Toronto 4 years ago, Canada earned runner-up status in the overall swimming medal table behind the United States, having collected a total of 28 medals, including 8 gold.

This time around, with a much smaller squad, Canada fell to 4th, earning just 1 gold on the competition, represented by Tessa Cieplucha‘s top prize in the 400m IM.

Brazil took home a record number of 30 medals to keep its runner-up position from 2015, securing 10 golds here in Lima. The nation swept the sprint free events over the course of the competition, with Bruno Fratus taking 50m free gold, Marcelo Chierghini winning the 100m and Fernando Scheffer earning the #1 time in the 200m free.

Argentina also got on the board in a big way, claiming 9 medals in total, three times its medal total back in 2015. Delfina Pignatiello was a one-woman wrecking ball in the freestyle events, racing her way to gold in the 400m, 800m and 1500m free, the latter of which represented the first time the event was contested at a Pan American Games.

I always enjoy this event. The American team may have been deeper than 2015 but I’m not sure anybody jumped out as a surprise like Katie Meili did in that meet.

BTW, I have no idea how anybody can complain about Rowdy Gaines, when you compare him to someone truly insufferable like Jill Montgomery on track and field. Somehow she thinks she has to hyper analyze every step, every jump, every throw. Like the line item veto, there should be some method to mute Jill Montgomery only. I’d pay extra.

Quite Impressive to see Margo Geer swim in 4 out of 5 possible relays in Finals as well as her individual events. So, still makes me wonder why number 4 fastest American woman was not on the World Championship 4×100 Free Relay at Finals?

Agree – looks very promising! I have a sense that quite a few very good swimmers will swim very good times and yet not make the Olympic team. 100 free and back depth for men is incredible; where the US needs a few break thru performers is mens distance and women’s 200 free.

And men’s breaststroke. Right now we have a bunch of good guys but none are really medal contenders. The world is getting faster – 58 low and 2:06 will earn medals next year.

This is the downside to the sport building a Professional base. There are gonna be kids who have amazing swims (swims that would have placed them on previous Olympic teams or previous Olympic Medals or even beat WRs from a few years ago), but wont make the US Olympic team. Without that motivation or validation, they will quit competitive swimming before they could ahve peaked. Events like the Pan-Am Games help keep some swimmers motivated, but I still think Olympics should expand the roster to 3-4 swimmers per event per country.

I would love to see 3 per country like they do with track and field.

Same, it’s time they get rid of that rule. This isn’t the 70s anymore where the US would sweep a particular event. The world has gotten so much better. I want to see fast swimming.

4 from a country is excessive and there’s no way the Olympics would ever allow it. In a banner year for the US, you’d be at risk of the medal tallies looking like the 2014 speed skating competition.

I could see allowing 3 in if they’re all super-highly-ranked (like top 8 in the world or something), but keep in mind that the sport needs to grow outside of the US as well, and it’s not going to if the rest of the world feels like they don’t have a chance for a strong finish.

Who were the team captains?

The piano put its stamp on this meet….