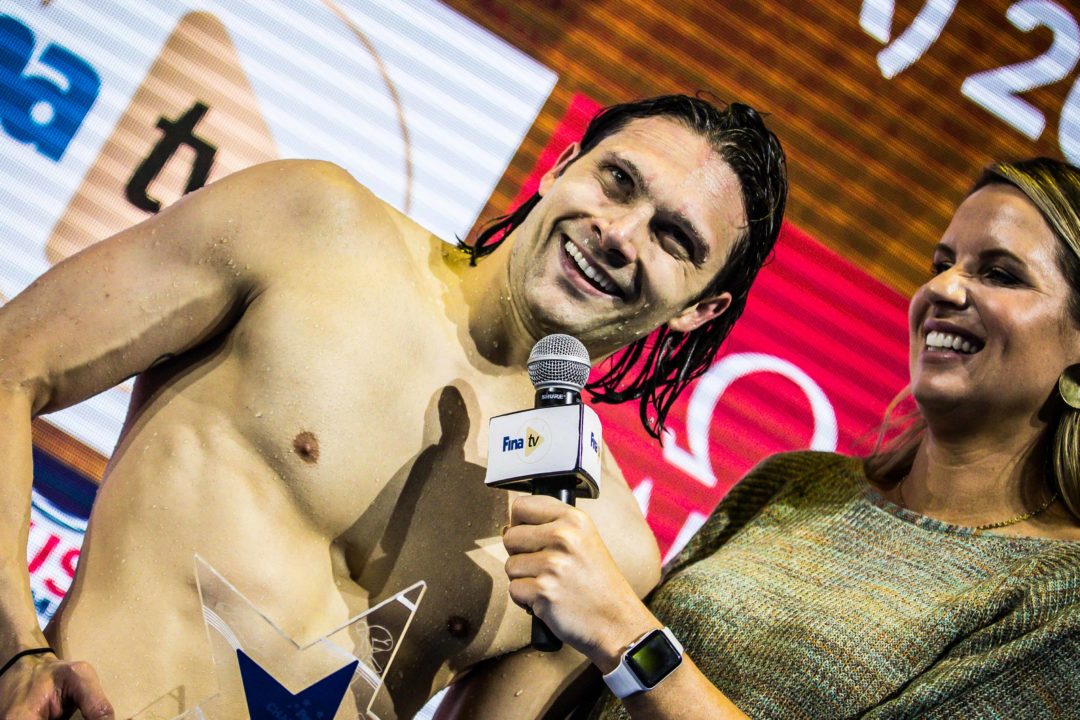 The video gives rare access to the ups-and-downs that come with being an elite athlete, including some behind-the-block footage. Archive photo via Jack Spitser/Spitser Photography

American swimmer Cody Miller had ups and downs at the 2019 Pan American Games, and his latest Vlog post chronicles that journey and the stark contrast of emotions that come with being an elite athlete.

Early in the video, Miller gives a tour of the athlete and fan zones at the 2019 Pan American Games in Lima, Peru. He then races to a silver medal in the 100 breaststroke and (around the 4:45 mark) talks about his emotions after that race. While his time of 59.57 wasn’t a season-best, he focused on the positive in a vlog filmed that night.

“Tonight was a really, really, really fun time. I very much enjoyed myself. Just the feeling of being behind the blocks, about to race, the energy, the atmosphere, the crowd was so energetic and happy to be there,” Miller said in the segment. “Representing Team USA at a high level meet like this, I’ll never take for granted again after missing some teams and having really bad seasons, I just feel like everything I get to do now is icing on top. Although my time wasn’t as fast as I would’ve liked it to be tonight, the time was a little disappointing, but ultimately winning a medal is amazing. Winning a silver medal for myself, my teammates, my country, feels really really good. At the end of the day, how can I be upset with taking home a silver medal for the United States? This experience I’m not going to sour just because this result wasn’t quite what I wanted it to be. Obviously I would’ve loved to win gold, obviously I would’ve loved to have a faster time, but all that aside, I think more important than those things are the experience, and just enjoying everything, enjoying being here.”

After showing us around the dining hall and into his room, (some of his roommates are water polo players), and a real meta moment at 7:40 where someone is holding up a Cody Miller Vlog sign in the stands during a Cody Miller Vlog shot, he gives a rare look behind the blocks in the final of the mixed medley relay at around the 8:30 mark. The excitement and the afterglow of Team USA touching first and winning what they thought was a gold medal.

At that point, the video takes sort of a dark turn. From the post-race chills Miller cuts quickly to a shot of him sitting inside of a church at around the 8:50 mark in the video. A much-more somber Miller appears in front of the camera, where he talks about how much fun he was having in the first half of the meet, and then begins to address the elephant in the room: that the American mixed medley relay was disqualified after touching first in the final after he was called for taking multiple dolphin kicks on his underwater pullout of the breaststroke leg. Team USA says that they have video that disputes the call, but declined to share that video when we asked.

“And now on the flip side, I want people to see a little bit of the other side as well. And so long story short, I haven’t been doing really well…the last week, has been just terrible and disastrous for me. I’m going to unpack that, I’m going to go into what happened the rest of the meet, I’m going to dive into that stuff and address things that I’ve never really addressed before. But not right now, I will get into that in a few weeks. But right now, I’m going to take a few weeks of vacation…clear my head, and just kind of get away from everything. I really need that personally.”

Miller says that he and his wife Allie are going to spend 2 weeks in South America, climbing mountains, and relaxing, and that he’s going to “stay the hell away from social media.”

He signs off with a commitment to “get through it” and “have some fun,” and promises again to talk about what he’s been dealing with.

Miller launched his vlog in October, 2017 and since then it has grown into a wholly unique and massive property in swimming that gives the deepest behind-the-scenes look at the life of an elite swimmer that the sport has ever had. As of posting, his channel has over 106,000 subscribers, and his most-viewed video (how to blow perfect bubble rings) has 2.4 millions watches. Miller won gold as part of the American medley relay and bronze individually in the 100 breaststroke at the 2016 Olympic Games. After qualifying for the 2014, 2015, 2016, and 2017 World Championships, Miller missed the 2019 team and instead swam at the Pan American Games.

Once a cheater always a cheater, you cheat in 2016 RIO, you cheat again, deserve to be DQed

It’s important to understand stuff happens in your life that might be uncontrollable how he handles the criticism will be his strength and motivation to prove he is not a cheat. This man has been through more than most of you. Get to know more about him before you judge the man. https://sports.yahoo.com/amphtml/news/the-incredible-story-behind-cody-millers-rise-to-olympic-fame-021205847.html

Bro I didn’t even know this story, that’s actually insane to go through all that. He should now continue to build and use the cheater comments as motivation to prove everyone wrong at trials

Makes no sense to intentionally risk a DQ, especially for a pro whose livelihood depends on results. It’s very likely totally unintentional. I know from personal experience.

I was DQd last summer for multiple dolphin kicks on a start. My coach was standing right there watching and said he didn’t see it. The official angrily ran up to me after the race, and practically yelled in my face when he delivered the ruling on the pool deck. I was thinking, I NEVER take extra dolphin kicks. Man, what’s going on? Why is this guy so upset and why did he DQ me? A few weeks later, I swam in another meet and had video of my races from the… Read more »

If he touches first in the 100 br at trials but doesn’t make qualifying time, is it possible that USA could consider taking second place for the relay team?

0
0
Reply
My Pronouns Are Hee/Haw

I just watched Miller’s vlog, and I think it’s ballsy and commendable of him (starting at the 9:30 mark) to address how hurt mentally he is as a result of the relay DQ. Not everyone would do that.

He’s definitely going to go into it later

Let’s see the video before insisting that he own it. We’re not sure it was a legit DQ yet, are we? The video will tell the story.

An official DQ is a DQ period. He was DQd —-there is no argument about that. Whether it was the correct call is a different story. He could’ve said he disagrees with the call, but he still owns it under the rules. And the likelihood that he didn’t double dolphin is about zero.

He’s personally seen the upside and downside of social media. Rode it like a wave to get sponsors, then shamed beyond belief for a mistake in a sport.

Anyone have a link to the race of the DQ?

You should be able to watch the whole session on WatchESPN still, but I haven’t seen any ‘clipped off’ videos anywhere yet.

None of the television cameras show anything useful in trying to figure out if he was legal or not. I think it’s super strange for USA Swimming to say “we have video that proves he was legal but we’re not going to let anybody else see it.”

The fact that USA Swimming “has a video” doesn’t mean squat. Who had the best view? The official on deck who made the call. If the official video didn’t overturn the call, or if the video was inconclusive, then it’s a good call.

There was no “official video” at PanAms

yeah this will settle everything once and for all

if he is in distress, then he deserves it. I just dont get why one cannot learn from his past mistakes! or maybe he does it intentionally with the hopes of not getting caught.

Dude, you seem to be in more distress than he is. Pump the brakes.

haha nah im chill. i just dont tolerate cheats, may they be on drugs or on dolphin kicks. very bad for the sport we all love