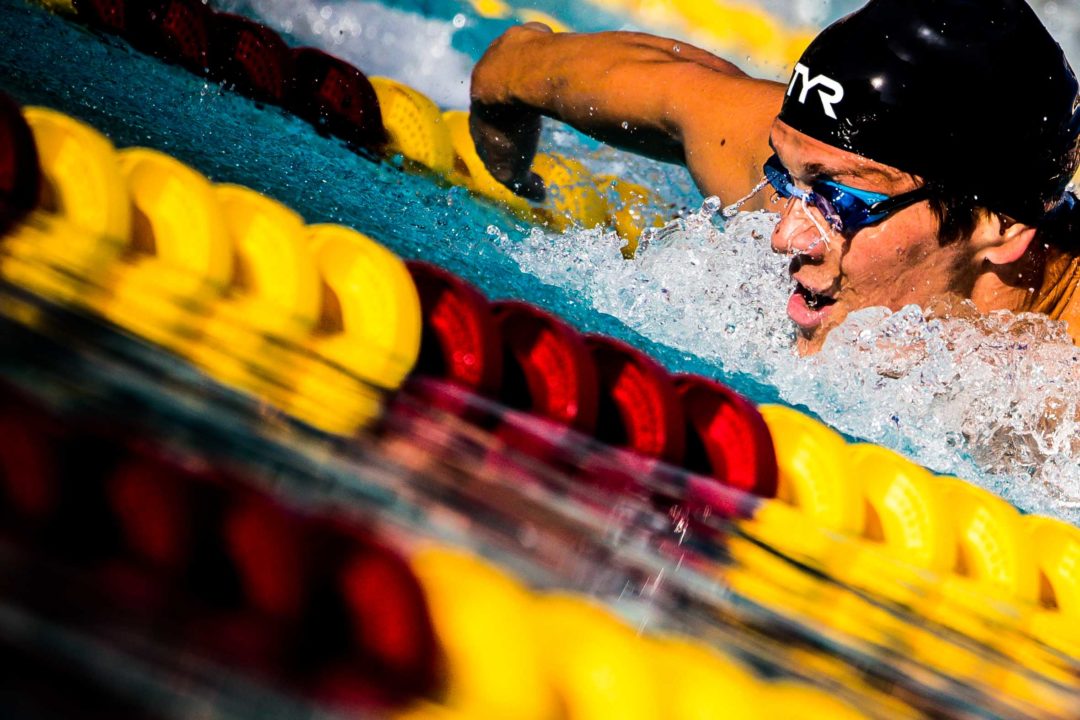 Tom Shields split 50.40, with a reaction time of .05, on the butterfly leg of the 400 medley relay at Pan Ams. USA broke the Pan Am record by 2.43 seconds. Archive photo via Jack Spitser/Spitser Photography

The United States and Brazil both took a bite out of the Pan American record in the 4×100 medley relay on Saturday night in Lima but it was the Americans who won the gold medal and etched their names in the record books. Daniel Carr, Nic Fink, Tom Shields, and Nathan Adrian combined for 3:30.25 to eclipse the Pan Am record by 2.43 seconds and beat Brazil by .73.

It was an exciting race from start to finish. Guilherme Guido opened for Brazil with 53.70, giving a .25 lead to Joao Gomes Junior as he began the breaststroke. Carr, meanwhile, clocked a 53.95 to keep it close. Fink outsplit Gomes Junior and handed off to Shields with a lead of .04. Shields crushed his leg, outsplitting Vini Lanza by .73. Adrian brought it home in 47.33, holding Marcelo Chierighini at bay over the final 100 meters.

Brazil was also well under the old record in 3:30.98. Bronze medalists Argentina set a new National Record in 3:38.41.

Can confirm shields had second fastest 100 Fly split of the year behind that one butterfler from the Bolles, not the schooling kid. Lots of potential there I tell yeah

Anyone know a way to see a replay of this event? Thanks

That, and no cheating from Cody Miller helped…

Anyone checked NCAA reaction times? That is where the fast consistent ones probably occur. I’m guessing a team has been under 0.15 total

That’s impossible, they also count the first swimmers reaction time, which for a good swimmer is .6, .15 is physically impossible

True. They should list that separate since reaction time off the start isn’t a good indicator of velocity at entry which is what matters on a starting.
So add 0.6, 0.75 becomes my point.

With all the discussion about the relay take offs and great individual splits is easy to miss that the “B” team was less than three seconds off the 2009 super-suit world record, with the Wilson, Andrew, Cordes and Miller all qualified ahead of Fink for this summer’s breaststroke relay legs, and before he got to swim In Lima Finnerty, Houlie, Nowicki and Fischer had all swum faster flat start 100s this year than Nic; and even as great as Adrian is (and he was on the A relay at Worlds) he had only the 8th fastest flat start American 100 Free this summer. That relay in Lima simply put all the separate pieces together as fully as could be hoped,… Read more »

The fast exchanges and then Tom swam an inspired fly leg to give Adrian a lead he wasn’t going to give up.

Tom probably had one of the fastest 100 fly splits of this entire Big summer meets period .

The great exchange performance in this relay is rather the great exception of common rule in the practices of coaches of USA teams. It looks like they don’t understand that the exchange is the essential part of this kind of competition and can be critical for the win. Just recently at World Championships the poor exchange performance cost American W4x200 relay team the gold medals and world record. American team was almost the slowest by this criteria – 1.02sec (0.26-0.38-0.38).
In the same race Russians were as good as 0.59sec (0.15 – 0.23 – 0.21) and Canadian team made 0.64sec (0.32 – 0.21 -0.11)
Americans lost to new world record holders and world champion Australian team 0.37 sec.

Relay exchanges are less predictable for the medley than free. Very risky to try to cut them too close. They belong in a different category.

Yes, it is very true. A butterfly swimmer doesn’t have much experience to judge correctly how much time will take for breaststroker to complete the leg being long or short at finish. And that’s why this 0.31sec at exchange yesterday is exceptionally good. But there was also an obvious desire to risk for the win knowing that exchanges may happen to be the major factor. DQ at competition of this significance would not be probably that painful.
It is also supports my point that 1.02 sec spent on exchange in freestyle relay is unacceptable.

If U.S. had those RTs at Worlds, they would have won. Dressel and Adrian both over 0.3 RT.

Adrian was diagnosed with cancer at the beginning of the year, so he can not be asked too much considering his age. The problem lies in the backstroke leg.

No one is criticizing Adrian. All Steve Nolan is saying is that Adrian was faster at Pam Ams than Worlds, so it would have been better for the relay at Worlds if he had done his Pan Ams time.