The Olympics That Would Have Been: Dressel’s Triple Triumph On Day 7 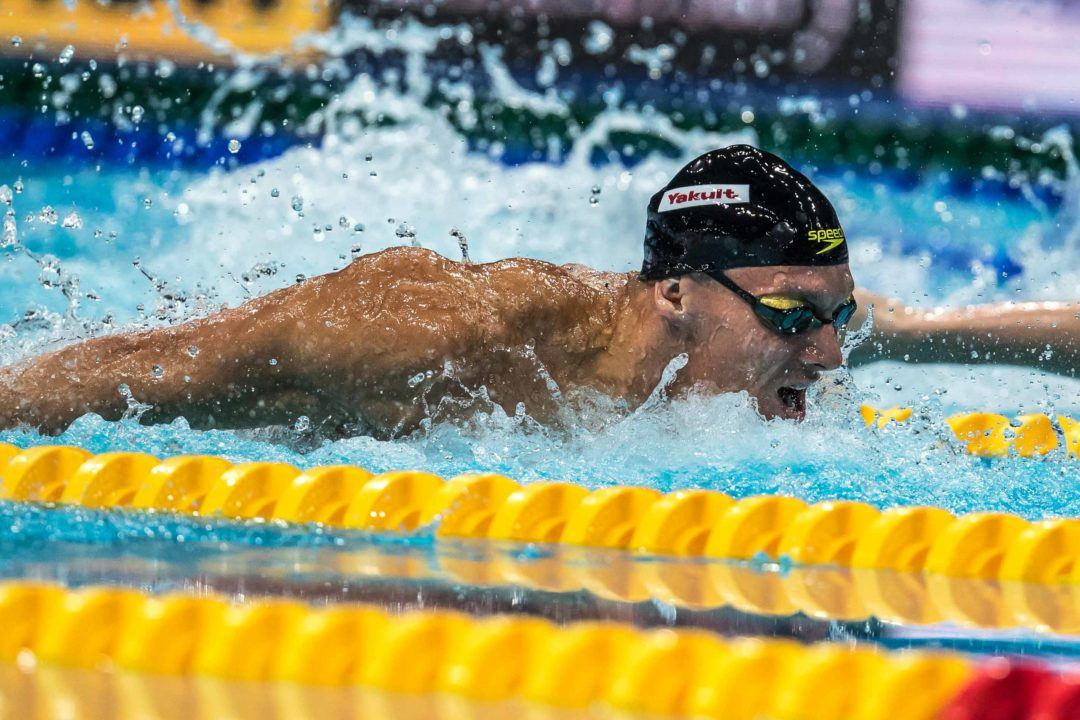 Just as he has done at the 2017 and 2019 World Championships, Caeleb Dressel is slated for three finals swims on Day 7 in Tokyo. Archive photo via Mike Lewis/Ola Vista Photography

Since breaking out in 2017, becoming the first (and still only) man to go under 50 seconds in a textile suit, Caeleb Dressel has been in a league of his own in the men’s 100 butterfly. His margin of victory from the 2017 Worlds, 2018 Pan Pacs and 2019 Worlds combined is an incredible 2.50 seconds, with his 1.17 gap in Gwangju the largest since Ian Crocker‘s world record victory in 2005.

Dressel extends his lead coming home, being the only one in the field splitting sub-27, as he touches in a time of 49.26 to slash just over two-tenths off his existing world record of 49.50.

After becoming the first woman to go sub-2:04 in 2019, 18-year-old American Regan Smith had broken through the 2:03 barrier at the U.S. Olympic Trials. Similar to Dressel in the 100 fly, she came into the final truly only in a race against the clock.

Out in a blistering 59.97, Smith holds 31s coming home to sneak under her Trials mark in 2:02.79, clearing the field by almost two and a half seconds. This victory gives her three medals at the Games.

Behind Smith, the field was incredibly bunched up. Taylor Ruck and Minna Atherton were out fast at the 100, sitting second and third in 1:01-low, but it was their respective teammates Kylie Masse and Kaylee McKeown who executed on the back half to take over second and third.

When she walked out for the 800 free final, Katie Ledecky had already raced 5,400 meters at these Games, taking on a gruelling schedule that had seen her win two gold, one silver and one bronze medal thus far. Similar to the mile, she wouldn’t need to be anywhere near her best time to win gold here. But she wanted to take aim at her world record that had stood since Rio.

Riding the momentum of her 200 free win, Australia’s Ariarne Titmus swims like she has nothing to lose early, matching Ledecky stroke-for-stroke through the 300.

Titmus was pursued heavily by Italian Simona Quadarella down the last 200, but her finishing speed managed to bring her into the wall for a clear silver in 8:12.89, with Quadarella third in 8:13.68. Those swims moved them into #2 and #3 all-time, overtaking Rebecca Adlington‘s 8:14.10.

Despite falling to the Australians at the 2019 World Championships, the Americans came into the inaugural Olympic final of the mixed 4×100 medley relay as the overwhelming favorites. All four of their swimmers in the final had won their respective individual 100m races, and they even had room to leave women’s 100 back champ Regan Smith on the prelim relay.

It proved to be quite the spectacle in its debut on the biggest stage in sports as only two of the top-five teams used the traditional two men/two women strategy, making for a wild race.

Ryan Murphy gave the U.S. the early lead in 52.18, with Evgeny Rylov (52.31) and Mitch Larkin (52.71) also putting Russia and Australia in a good position. Adam Peaty flies by everyone for Great Britain on breast, splitting a record 56.07 to give them a sizable lead over the Aussies. The Americans had used Lilly King and were back by over six seconds.

Coming off winning individual 100 fly gold earlier in the session (and a semi-final in the 50 free), Caeleb Dressel goes almost the exact same time with a flying start (49.25) to hand Simone Manuel a two-second buffer over the field.

After a cruisy 21.52 prelim, Dressel puts together a smooth 21.23 out of the first semi to easily win the heat as he prepares for the mixed medley relay. Behind him, Bruno Fratus (21.50) and Michael Andrew (21.58) take second and third.

In the second heat, Florent Manaudou blasts down in 21.27 as he sets himself up for a chance to regain the gold medal he lost in 2016 (after winning in 2012). Vladimir Morozov (21.41) and Kristian Gkolomeev (21.47) have strong swims behind him to qualify third and fourth overall.

With both swimmers set to race the mixed medley in a matter of minutes, Cate Campbell and Simone Manuel look fairly controlled coming down the pool as they clock 24.14 and 24.19 respectively to go 1-2 in the first semi of the women’s 50 free. Bronte Campbell and Ranomi Kromowidjojo (24.27) tie for third.

Unfortunately the next Olympics will be in 2024

Whilst we could see WRs in this session, I’m not buying them in every final !! MMR = highly likely but maybe not to the extent proposed, M100FLY & W200BK = reasonable bets but whilst Ledecky remains the prohibitive favourite for W800FR; that doesn’t necessarily equate to automatic new WR.

M100FLY: Agree with Dee’s summation. Dressel for Gold but the remainder of the podium is a lottery. Am leaning towards Milak being part of that equation but it frankly looks very open.

W800FR: Whilst Ledecky may be increasingly vulnerable in the shorter races, she still has considerable real estate between herself and her competitors in the longer events. Am leaning towards Quadarella for silver and Kohler for bronze. Titmus cannot… Read more »

Yes, I could’ve been more precise in my use of language. What I was meaning to state is Larkin can be erratic in the sense of his relays sometimes being “at odds” (AND being consistently sub-standard) in comparison to his individual 100back. Having said that, he’s not overly reliable there either.

I don’t think Britain will get third with that lineup. I feel like if Ikee was involved Japan would be in medal contention but not so sure about that. China could do it for sure with xu, zibei, yufei, and any 52 high-53 low freestyler. Although I guess if peaty does 56 low they could do it.

Perhaps with Davies on back and Guy on fly.

I think Dressel will be 48.9. He is certainly aiming for it and I don’t see why he wouldn’t be able to do it. He goes out 22.8 and comes back in 26.1. With his incredible finishes I think he can do it.

It’s possible but he would need the perfect race.

The U.S. have a stacked medley relay team… but I have a sense that Lily King is supreme in individual events but so much in relays…no intention to disrespect cause damn, but relays are something else

At the 2016 games, King also split more than 0.7 slower than Meili, Efimova, and her own flat start, as well as slower than all three flat starts.