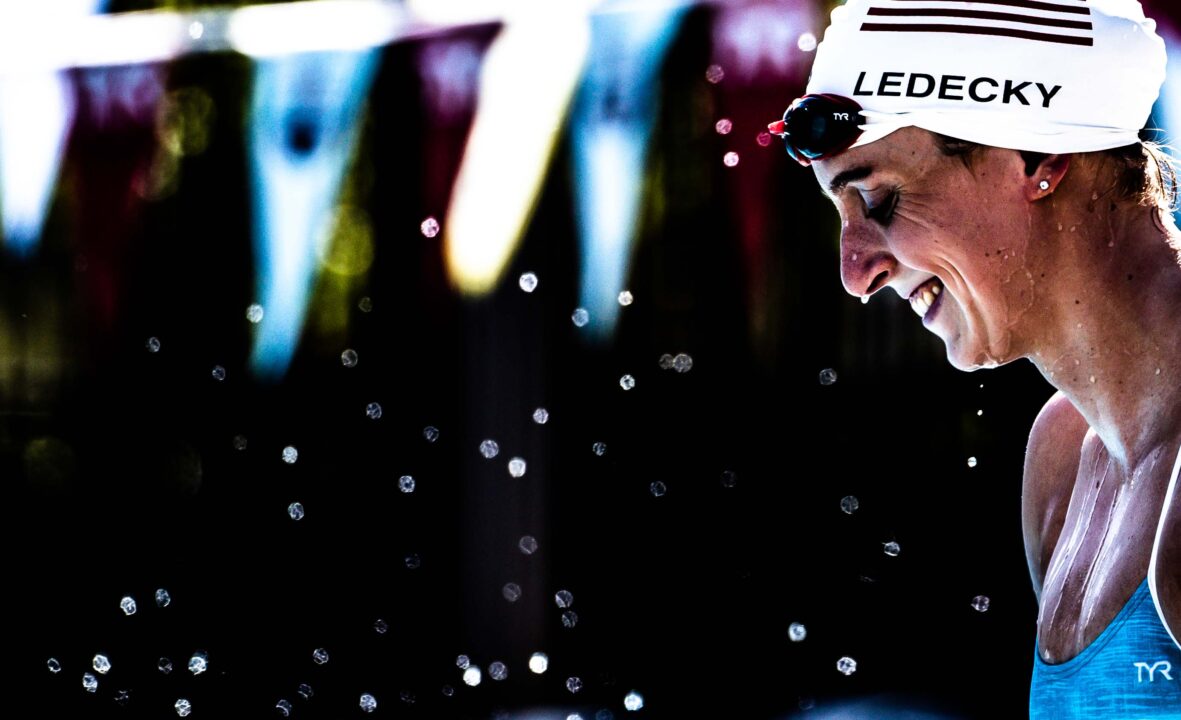 After swimming faster-than-the-Olympics times in her last outing in Orlando, Katie Ledecky (above) headlines a star-studded field for Westmont. Archive photo via Jack Spitser/Spitser Photography

The first Pro Swim Series meet of 2022 will kick off next Wednesday in Westmont, Illinois at the FMC Aquatic Center.

The event replaces the previously-scheduled stop of the Des Moines Pro Swim Series that was planned for the same weekend and follows the canceled January stop in Knoxville that was also canceled.

Westmont’s sparkling new FMC Aquatic Center is a novel addition to the series and will be bidding for insertion into the regular rotation of major meets for USA Swimming.

They’ll be showing off in front of a very small field, however, possibly even smaller than we saw at last year’s Pro Swim Series meets.

COVID Protocols: masking rules will follow local regulations. In Illinois, Governor J.B. Pritzker will lift a mask mandate in most scenarios on February 28 due to high vaccination rates and reduce case loads and severity. USA Swimming says that participants will still be required to test negative for COVID-19 within 72 hours before the start of the meet.

While the fields aren’t deep, many of the United States’ biggest names will be in attendance chasing prize money that has been reinstated for this meet.

Both swimmers raced at an Orlando Sectionals meet earlier this year as their first long course racing of 2022.

Ledecky is entered to swim a pretty usual schedule of the 200 free, 400 free, 800 free, 1500 free, and 400 IM. In a new training ground since the Olympics, Ledecky is coming off a performance in Orlando where she was faster than her Olympic final times in the 200 and 800 freestyles.

Dressel, meanwhile, is building into the new season after taking some time off in late 2021. He’s entered in the 50 free, 100 free, 200 free, and 100 fly. That’s about what he might be expected to swim at a meet like this, though it is a change in pattern in one regard: neither of the Florida swimmers are dramatically over-entered in the meet.

Dressel wasn’t as sharp as Ledecky was in Orlando, but the times were still an improvement over when we last saw him in the ISL season and were more in line with expectation.

Other Olympians and National Teamers are scheduled to make their post-Olympic long course debuts as well. Lilly King will swim the 100 and 200 breaststrokes, including matchups with the Olympic gold medalist in the 100 Lydia Jacoby and fellow Olympian Annie Lazor.

The men’s backstroke races will feature Ryan Murphy in his first long course racing of the season; among others, he’ll face off against Shaine Casas in his first meet since moving from Texas A&M to the University of Texas to join Eddie Reese’s post-grad group. Casas is coming off his international breakout at the Short Course World Championships where he won gold in the 100 back and silver in the 200 back in December.

Nic Fink, Will Licon, and Cody Miller will race in the men’s breaststrokes, joined by swimmers like Iceland’s Anton McKee and former Michigan Wolverine Charlie Swanson, who is now representing NOVA of Virginia. Melanie Margalis is soldering on with her swimming career after missing the US Olympic Team, and in long course will race names like Beata Nelson, Leah Smith, Hali Flickinger, Canada’s Bailey Andison, and France’s Fantine Lesaffre, who is at new training with the NC State pro group.

Michael Andrew will seek to continue to get himself back on track with already his fifth meet of 2022 – a schedule more similar to what we’re used to from him after sitting out for more than five months in late 2021. He is entered in the 50 free, 100 free, 100 breast, 100 fly, and 200 IM. That’s a more typical schedule for him after we’ve seen him experiment with more 200 and 400 yard/meter races this year.

The women’s sprints will have loaded fields too. That includes 17-year old Claire Curzan, who is jumping out of high school season and an American Record in the 100 yard fly back into long course. She’ll face off against the likes of Abbey Weitzeil, Linnea Mack, Erika Brown, Kelsi Dahlia, Natalie Hinds, Mallory Comerford, and Katie McLaughlin in some of the deepest fields in the meet. Curzan will also race against Olivia Smoliga and Kathleen Baker in the 100 backstroke as she looks to parlay her yards success into meters success.

A few, but not many, collegiate swimmers are scheduled to race as well before they head off to NCAAs. That includes Emma Weyant, who won silver in the 400 IM at the Tokyo Olympics, and who is in her freshman season a Virginia. She’s entered in the 200 free, 200 breast, and 400 IM. There was some school of thought that more collegiate swimmers might come to this meet, with the US international team selection trials coming shortly after the end of the NCAA season, but overall there aren’t many.

While the races aren’t deep, and the prelims sessions will be very short, most of the big names will be there in Westmont. That should provide a big bang-for-the-buck

Will they still have prelims for the events with less than 8 entries?

No 50m breast, back and fly. Strange.

9 men, 2 women in the 1500; They should combine the two and let Katie race with they guys.

Wow is there a livestream for this meet?

The way my heart *soared* to see Melanie Margalis on this psych sheet…!!