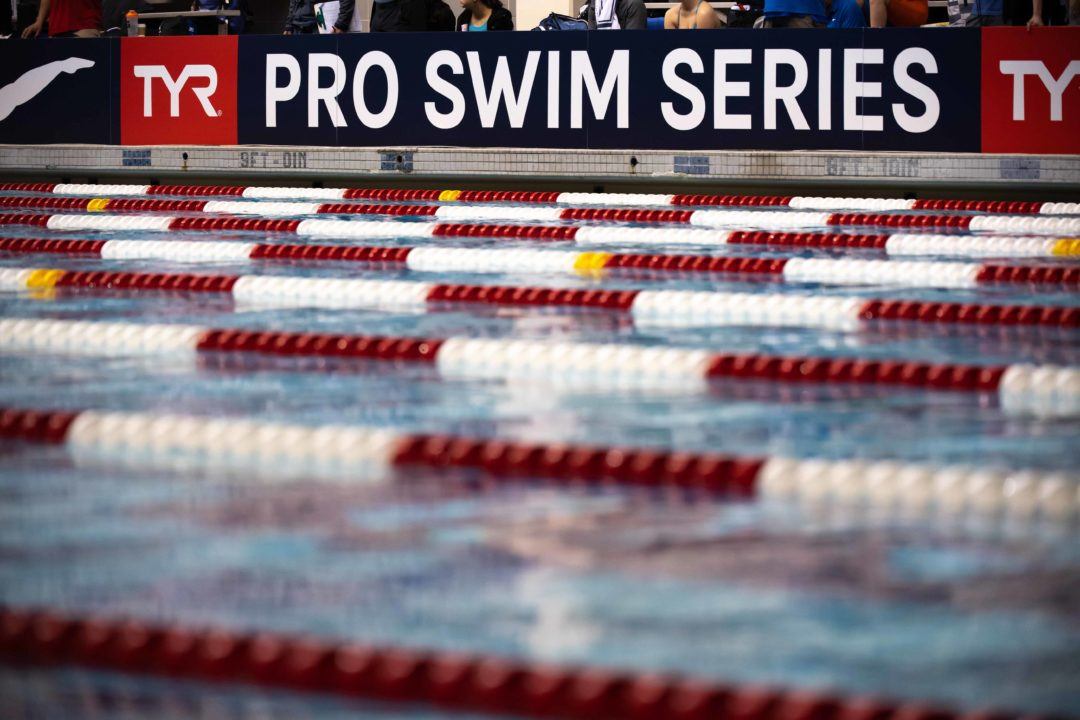 The event, scheduled for January 12-15 in Knoxville, Tenn., has been canceled due to COVID-19. Stock photo via Mike Lewis/Ola Vista Photography

USA Swimming has canceled its first Pro Swim Series event of the year in Knoxville, Tenn., sources told SwimSwam. The event was scheduled to run Jan. 12-15 from the Allan Jones Aquatic Center.

Update: USA Swimming has since confirmed the cancellation, saying it has opted to “prioritize the health and safety of the athletes, staff and event volunteers,” amidst the current COVID-19 climate in the United States.

“In an abundance of caution, USA Swimming, the national governing body for the sport of swimming in the United States, announced that it was cancelling its first TYR Pro Swim Series event of the year, originally slated for Knoxville, Tennessee, from January 12-15, 2022,” USA Swimming said in a press release.

“With the new Olympic quadrennial only just beginning, and the current COVID-19 conditions across the country, USA Swimming, with the support of event host Tennessee Aquatics and Visit Knoxville, made the decision to prioritize the health and safety of the athletes, staff and event volunteers.”

In an abundance of caution, USA Swimming is canceling its #TYRProSeries Knoxville event originally slated for January 12-15, 2022.

The 2022 Pro Swim Series schedule was originally comprised of four stops, beginning in Knoxville in January and then shifting to Des Moines, San Antonio and Mission Viejo later in the year.

After PSS events in Irvine, Mission Viejo and Indianapolis were canceled in 2020 due to COVID-19, USA Swimming successfully ran two events in November 2020 (Richmond and Irvine) before rattling off four in the first half of 2021 prior to the Olympic Trials. This included the Knoxville stop in January.

As the new Omicron variant has been spreading throughout the world recently, COVID cases in Tennessee have seen their biggest spike since September over the last week. On Jan. 2, the state reported a seven-day rolling average of 6,261 new cases per day, with over 13,000 reported on Dec. 30. Daily case numbers were hovering in the 1,000-1,500 range in October and November.

Indoor meets are not the way to go at this time. The swimmers are young and will probably be fine. But, the officials, coaches and volunteers are adults and some are Seniors. If we don’t protect the people that run the meets, there will be no meets.

A lot of the information about who is and is not impacted heavily by COVID-19 evolves with each variant.

Omicron, which attacks the upper respiratory airways more than the lower (lungs), versus other variants, makes it less deadly for adults, but also makes it more dangerous for children. Children’s hospitals are seeing spikes in COVID patients much higher than in prior waves – both as a primary hospitalizing factor, and as an aggravating factor of other UR conditions.

Aye .This is also an argument that young children ought never have been in lockdown or denied sunlight , play , social interactions & physical activity 2020-21.

The amount of varying respiratory infections babies & toddlers & under 5s get is obvious if they go to creche . Its part of their immune development but the good news the time they are 4 they are definitely dropping off & early.school years see them.with a lot of built up immunities .

Ridiculous! I’m not a Trumper and I’m not an anti-masker, but all other sports are proceeding as normal. If I was a USA Swimmer I would protest this decision ASAP.

Football is outside which is completely different. Let’s see what happens with basketball….many players are contracting it…..we will see how long fans are allowed

their games are still going on..

sorry, certain teams are postponing their games. multiple games at a time.
the league was in talks of total postponement.

Latest numbers I’ve seen are that 92 NHL games have been postponed.

The league did pause the season, including closing all team facilities for 4 days, just before Christmas.

Sugar Bowl? Cotton Bowl? Lots more with indoor stadiums. Never been to a swim meet with 80k in attendance!

I agree. The USA swimming board is not right!

My read is that this was a cover for very low enrollment.

Lots of college football bowl games were canceled for low enrollment too, aka when one or both teams got COVID ;-).

I’m sure with the travel challenges going on now as well it was a strategic call.

Yes that would be your read, but it would be the incorrect read as it was based on predicted surges in conjunction with flight cancellations mounting up.

Did you shatter your ankles jumping to that conclusion?

Apples and oranges comparison. The Pro Swim Series isn’t on the same stratosphere of revenue production of a bowl game or national championship. The reality is the greater percentage of the American public wants football and basketball to take place and very few care if USA Swimming has a Pro Swim Series. Factually, the average person doesn’t have a clue about the swim meet scheduled in Knoxville vs. the greater percentage of society being fully aware of the January 10 National Championship game.

Actually, the comparison is spot-on. With air travel involved, hotel stays, large numbers of coaches, athletes, spectators (who are not required to be vaccinated – yet), it’s about exactly the same.

Just because the “big ticket” sports are more viewed, more popular and widely known, doesn’t mean the risks are any lower. In fact, more gather there! And they’re drinking. Hswimmer nails it – as related to decision making – cancelling a “less than” swim event on the basis of COVID while the giant sports continue unabated is disingenuous.

No one was going to go anyways. No price money = no swimmers

Uh-oh. This is how 2020 started. It all collapsed from there.

If only everyone got vaccinated

Because vaccination status dictates contracting the virus or not. Thats not how this disease works my friend.

About 90% of hospital admissions in Illinois are unvaccinated even though they are less than 30% of the population. THAT is how vaccines work, friend.

We dont have a working vaccine for the common cold or flu, what makes a coronavirus respiratory disease different that we will have a vaccine that cures it wholly like we do many other diseases? Respiratory viruses are nasty and stick around for ages. That is not a new fact.

We don’t have a working vaccine for the flu? When was the last time we had a flu outbreak akin to 1918?

You are correct, actually about the whole country. That’s the same number throughout the US. Those that downvoted your post are certainly entitled to their opinion, but hospital admissions are in fact an objective metric – and it’s tracked. Hospitals are required to report it. It’s about 90% nationwide.

Nothing would change lol

Except hospitals would have room in ERs, first responders and health care workers could take a breath, we wouldn’t have to cancel events, life would be normal. But yeah, besides those things nothing would change. Keep messing it up for the rest of us science deniers. My only solace is the likelihood that they will continue to die in defense of their ignorance.

We actually don’t have to cancel events lmao. You say life would be normal, implying that life is not normal in many places. (It is) People like you have said death will come to the “deniers” but places like florida and Texas are chugging along quite alright after all this time, so have fun in your hole of isolation when they send you back and you do it unquestionably

Not to include the long-term disabled.

Fun fact. Just because you can count something doesn’t mean you should! (Those are patients that died with covid not from covid)

And probably many died at home from Covid who weren’t counted as Covid. My guess the count has been under reported

Covid deaths are massively undercounted. All you have to do is check the surplus death numbers. No other explanation. “The raw death count gives us a sense of scale: for example, the US suffered roughly 470,000 excess deaths in 2020, compared to 352,000 confirmed COVID-19 deaths …”

I remember when these comments were claiming that there were fewer deaths in 2020 versus 2019. I’d love to have been in the room when some crackpot Breitbart-type journalist did the mental gymnastics to come up with that one. Even at these far-right wing media outlets, it’s hard for me to believe that someone looked at two numbers, where one is so clearly bigger than the other, and said “yep that number’s smaller.” Yet, apparently that’s what happened.

Never saw the original reporting, just the flood of comments and social posts that were clearly driven by some thought leader somewhere. Maybe they just twisted the words to make it confusing, which led people to believe this “total deaths were lower”… Read more »

This entire use of semantics of “dying with COVID” and “dying of COVID” needs to stop. With the former comments, people are continuing to peddle the misinformation that hospitals are lying about cause of death, and that COVID itself isn’t actually killing many people, because they would have died anyway of X, Y, or Z condition. This is completely insensitive to the families of victims, and it is also patently untrue. COVID is the cause of their deaths. It’s also a lie that hospitals are padding the data. That was debunked back in 2020. The fact is that COVID has caused the deaths of nearly 900,000 Americans, and no amount of this sarcastic and semantic argument of “with COVID” will… Read more »

Good. I think we ought keep staff busy so they won’t start Tik Tok dancing . I see they have also started to sing.

Odds Tennessee told them to get lost and/or low registered swimmers?

0% odds, the decision was made by USA swimming based on rising numbers and the predicted surge coming after the holidays. Tennessee has a dive meet right now and then an age group meet this weekend so zero percent this was Tennessee