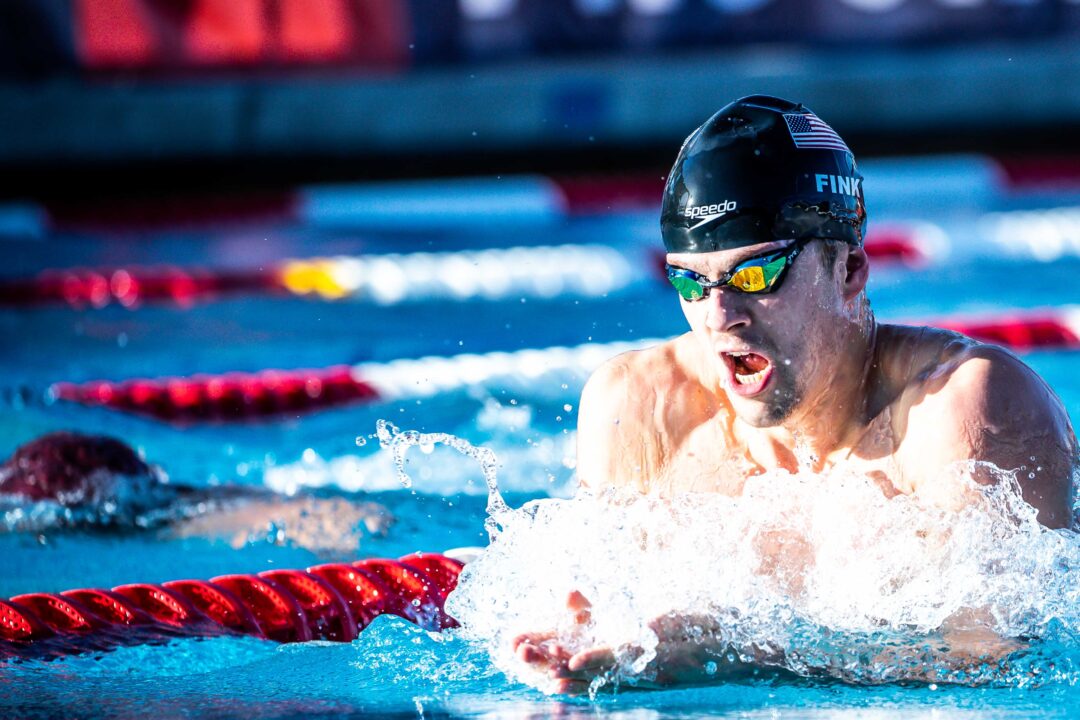 There will be $292,000 in total up for grabs at the three remaining stops of the 2022 USA Swimming Pro Swim Series, including a new stop in Illinois. Archive photo via Jack Spitser/Spitser Photography

USA Swimming has reinstated prize money for the remainder of the 2022 Pro Swim Series. The announcement came along with a revised national meet schedule driven by the dramatic changes in the international calendar over the last month.

In the 2020 Pro Swim Series, USA Swimming awarded these same prize outputs, but also planned to award a $10,000 series prize to the top male and female with the best performance from the whole series.

USA Swimming says that the decision to restart prize money came after the postponement of the 2022 World Championships in Fukuoka to 2023, but before the newly-announced 2022 championship in Budapest.

“In the wake of the World Champs originally being postponed, and these athletes missing out on a funding opportunity, the National Team worked with our finance team to reconfigure budgets to find funding for our athletes,” a spokesperson said. “After all of the changes, we chose to move forward with the funding to help our athletes during this shortened quad.”

The announcement of new prize money for the meets comes after the International Swimming League announced exclusivity clauses to contracts that will pay salaries, in addition to prize money, for season 4. Per the terms of those “Pro” contracts, athletes won’t be able to swim in events like the Pro Swim Series once the ISL season begins, except with special permission of the league.

The ISL season begins on June 3, which overlaps with the Mission Viejo meet, which could cause conflict for American athletes. Only 4 of the league’s 10 teams (Cali Condors, Aqua Centurions, London Roar, and New York Breakers) compete in that opening weekend, and of those teams, only the Cali Condors have more than a few American swimmers. With the first 5 matches of the ISL season planned to be hosted in North America, this means that most athletes could race at the Pro Swim Series stop before beginning competition for their ISL teams, though the “Pro Contract” clauses could limit that.

Because the Westmont and San Antonio meets are outside of the ISL season, they would not provide a conflict with the no-competition clause in the ISL’s “Pro Contract.”

The first two meets in the Pro Swim Series schedule were canceled. January’s stop in Knoxville was canceled because of rising cases of COVID-19 nationally, while an early March meet was canceled citing “ensuring that (the domestic calendar) provides the best competitive opportunities at the most impactful time.”

The Des Moines meet has now been replaced by a meet at the FMC Aquatic Center in suburban Chicago the same weekend. The final two meets of the series, in San Antonio and Mission Viejo, will have outdoor 50 meter racing options.

FMC is my pool that I swim in as part of FMC Aquatic. Can’t believe they’re bringing the pro series here!

The westmont FMC natatorium is quite good. They have three sided seating and it is really nice. Glad they are bringing the PSS a bit out of the usual suspects when it comes to pools.

The proof will be in the pudding if the athletes show up. The good news is that it’s not terribly far from O’Hare, and keeps anyone flying in for the meet from having to go through downtown.

It’s not far from Midway either for folks taking Southwest. Also a huge amount of hotels and air bnb in that area (Naperville, Downers Grove
Ect…) and it’s still in the dead of winter so not a lot of construction traffic 😬

If USA Swimming is still requiring athletes to show up at two Grand Prix/Pro Series meets for stipend funding, the athletes who aren’t in college that are most dependent on that will be at both March meets and forgo the Mission Viejo meet so they can take the ISL salary and also benefit from prize money.

We don’t know if they’re still requiring it. My suspicion is that this year, they are not.

Braden, are nationals in Irvine going to serve as trials for Fukuoka 23/Doha24 or is USAS planning on organizing new trials next year?

They haven’t said yet. My guess is that they’re still trying to plan what they’re going to do for those selections.

I know historically that they’ve chosen the pre-Olympic Worlds a year out, but…I’m not sure they’re going to stake selections for three LCM World Championship meets on one trials event.

I think quietly most of the federations are just hoping that Doha 2024 will just quietly disappear. There are a lot of reasons that make that hard, but I would say that 90% of swimming is just shaking their head and hoping something will be done about it.

Everything is negotiable – including the tendered form of “ISL’s “Pro Contract.” So US swimmers should band together and negotiate a workable compromise!