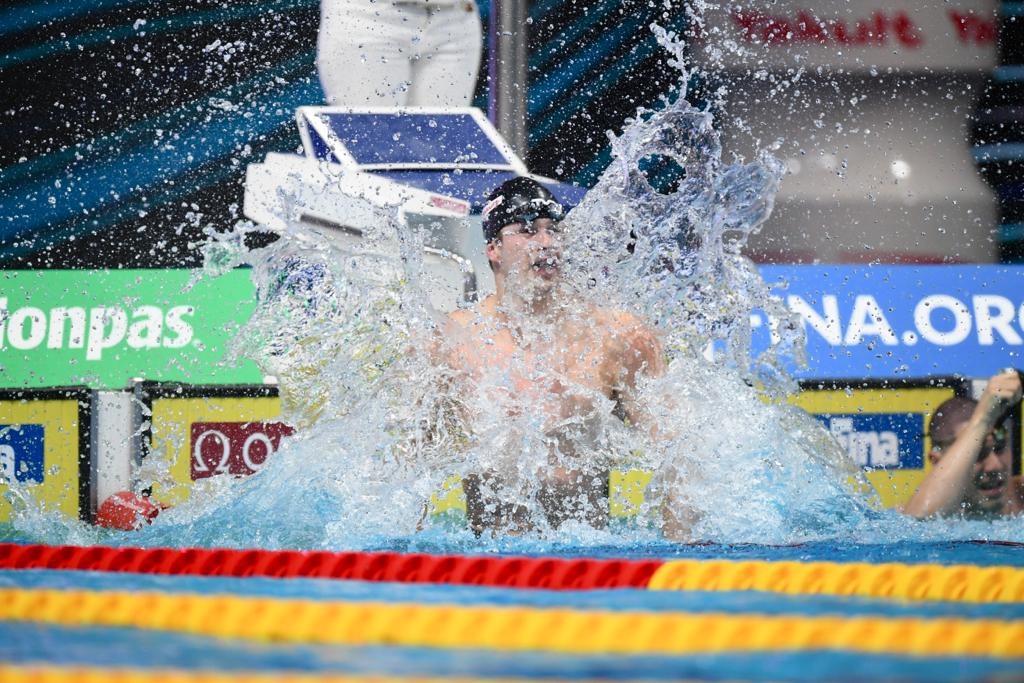 The United States, Canada, Mexico, and Aruba were all represented in the finals and semi-finals of day 4 of the 2022 FINA World Championships. Current photo via Fabio Cetti

The United States, Canada, Mexico, and Aruba were all represented in the finals and semi-finals of day 4 of the 2022 FINA World Championships. Team USA once again leads the medal count, though Canada advances multiple swimmers to various events in day 5’s finals session. Let’s get into it.

Finally, Team USA opted for the traditional man-man-woman-woman line-up for the 4 x 100 mixed medley relay, and it paid off. This is particularly noteworthy in that Team USA did not have superstars Caeleb Dressel or Ryan Murphy swimming the butterfly or backstroke, respectively.

Last summer at the Tokyo 2020 Olympics, Team USA placed a disappointing 5th with a time of 3:40.58. Tuesday in Budapest, Team USA clocked a time of 3:38.79. Though the entire field was slower this summer than at the Olympics, the strategy clearly paid off for the Americans, who last summer utilized a man-woman-man-woman strategy.

Most crucially, Team USA opted for a male breaststroke swimmer in Budapest, the discipline with the largest discrepancy in splits between male and female swimmers. Team USA’s coaches have one more long course world championships to get the mixed medley relay formula right before the 2024 Paris Olympics, though the strategy used in Budapest appears to be one worth replicating in the future.

Perhaps the biggest surprise of day 4 was the withdrawal of Caeleb Dressel from the 100 freestyle. Dressel qualified 2nd behind Romania’s David Popovici in the prelims, but scratched the semi-finals for unspecified medical reasons. This also took Dressel out of the mixed 4 x 100 medley relay, where he might have swam the butterfly or the freestyle leg.

It is unclear if Dressel will swim the remainder of the competition. If not, he will be unable to defend his titles in the 50 freestyle and 100 butterfly, and would be absent from the men’s 4 x 100 medley relay.

Fink and Andrew Claim Gold and Bronze in 50 Breaststroke

Team USA’s Nic Fink became the first American man to win the 50 breaststroke at the long course World Championships, posting a 26.45 to out-touch 100 breaststroke champion Nicolo Martinenghi of Italy by 0.03. American compatriot Michael Andrew placed 3rd in 26.72, earning his second bronze medal of the competition. Fink was the silver-medalist in the 100 breaststroke behind Martinenghi and will also race the 200 breaststroke in Budapest.

Bobby Finke made Olympic history winning both the 800 and 1500 freestyles at the Tokyo 2020 Olympics, the former of which had never been contested in the Olympics for men. Finke suffered a bout of Covid in early 2022 that took him out of the SEC Championships and which put a bit of a damper on his NCAA performance. While Finke won both the 800 and 1500 at U.S. Trials, he was going to have to prove that Tokyo wasn’t a fluke in Budapest.

Though his margin of victory in the 800 in Budapest was narrower than the margin in Tokyo last summer, Finke still showcased his otherworldly closing speed, clocking a 25.93 on the 16th and final 50 meters of the 800, taking the gold medal in a new American Record of 7:39.36, out-touching Germany’s Florian Wellbrock by just 0.27, despite sitting in 4th at the 750-meter turn.

2020 Tokyo Olympic silver and bronze medalists in the women’s 200 butterfly Regan Smith and Hali Flickinger both advance to the final of the women’s 200 fly in Budapest, though with Flickinger ranked 2nd and Smith 3rd behind Canada’s Summer McIntosh, who lowered the World Junior Record in the event to a 2:05.79, cleaving an entire half-second off the mark set in 2017 by Japan’s Suzuka Hasegawa. Mexico’s Maria Jose Mata Cocco placed 11th in the race with a time of 2:09.78. Mata Cocco lowered the Mexican National Record in the race earlier in the prelims, posting a 2:09.32.

Both Carson Foster and Chase Kalisz advance to the final of the men’s 200 IM, ranked 2nd and 3rd, respectively, behind 400 IM champion and 200 fly runner-up Leon Marchand of France.

Canada and the USA will occupy 4 of the 8 lanes in the final of the women’s 50 backstroke. Kylie Masse is the top qualifier, followed by Smith, with Ingrid Wilm coming in 4th and Katharine Berkoff 6th. This may also provide a preview of the upcoming Commonwealth Games in that Australia’s Kaylee McKeown will go into the final seeded 6th while Great Britain’s Medi Harris will hold the 8th seed. Harris advances to the final after winning a swim-off as she originally tied for 8th with Italy’s Silvia Scalia, but we’ll save that story for the European recap.

Though Dressel will not swim the finals of the 100 freestyle, the United States will be represented by Brooks Curry, who goes into the final seeded 7th with a 47.90. Canada’s Josh Liendo will also race in the final of the men’s 100 free, occupying the 3rd seed, though Ruslan Gaziev placed 16th in the semifinals. This is just behind Aruba’s Mikel Schreuders who finished 15th in 48.73, after posting a new Aruban National Record in the event in the prelims in 48.40.

@Coleman and @Gold Medal Mel Stewart: we need another Florida practice and pancakes…except this time we need to see what Bobby can push a 50 meter free in, but swam as a solitary, all-out sprint.

In those distance events minor in-season time advantage means absolutely squat. As I mentioned the other day, I’m never doubting Bobby Finke because he’s like glue then he’s like fire. It was always blatantly obvious how that race was going to turn out, unless Romanchuk could manage an extra body length lead and sustain it entering the final 50. Now the challenge for Wellbrock and others is to push the event closer to the world record pace and see if Finke can handle it.

Otherwise I was very pleased with Regan Smith’s post-race comments. She said she was trying to soak it all in and enjoy the moment instead of being nervous and wishing it to be over with quickly.… Read more »

Repeat after me. “In Finke I trust.”

In God I trust not bobby