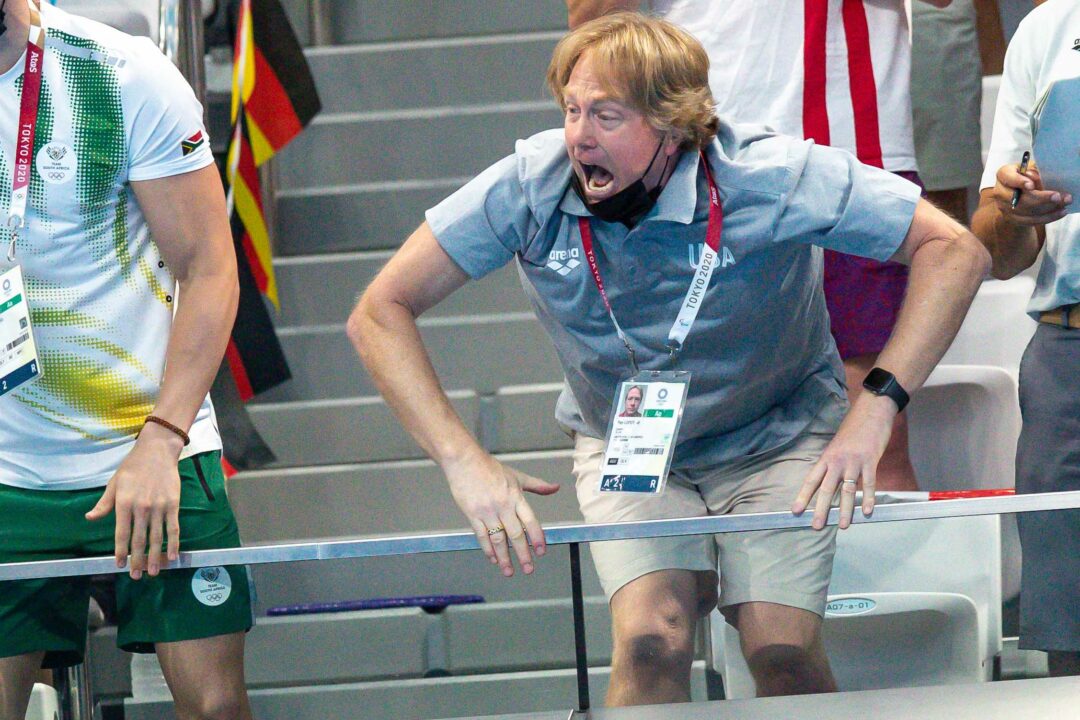 Ray Looze is now one of the highest-paid swimming coaches in the country after receiving another contract upgrade from Indiana. Archive photo via Jack Spitser/Spitser Photography

That puts Looze among the highest-paid coaches in the country. While not all coaches’ salaries are public record, recently-retired Jack Bauerle was previously the highest-known salary in collegiate swim coaching at $380,000.

That is in addition to money from camps and the affiliated swim club.

The last time Looze received a contract extension and a raise came in 2019, when he was connected to the open Stanford position, which ultimately went to Dan Schemmel. A year later, Looze said that he wasn’t pursuing the head coaching position at his alma mater USC, but when that position became open again this offseason, he was again rumored to be the administration’s first choice. USC ultimately gave Lea Maurer the job on a more-permanent basis, after serving as the interim head coach last season.

Looze wasn’t the only aquatics coach at Indiana to get an upgraded deal: diving coach Johansen will make $122,626 next season. That makes him one of the highest-paid diving coaches in the country as well.

In the 2021-22 season, Looze led the Hoosiers to a men’s Big Ten Championship, the fifth title for the men and 10th between the two programs during Looze’s tenure. The result gave the IU men their fourth conference title in six seasons. As a result, Looze was named Big Ten Coach of the Year for the eleventh time and the sixth time as the men’s coach.

That run included junior Brendan Burns being named Big Ten Swimmer of the Year and Big Ten Swmimer of the Championships after winning the NCAA title in the 200 fly.

The Indiana men had similar success, scoring 30 points on 1-meter, 17 points on 3-meter, and 17 points on platform. That included runner-up performances in both springboard events from Tokyo 2020 Olympic silver-medalist Andrew Capobianco.

No one deserves it less than Ray

The GOAT Coach Ray Looze is grossly underpaid for all he does, but congrats anyway!

0
-3
Reply
Things that make you go hmmm.
Reply to  Guerra

I would guess that If you compare the cost of living with Ray’s highest paid cohorts, Ray would have already shown to be doing really well comparatively before his raise.
IU must be finding a way of compensating some of their few more successful coaches since they have gotten rid of their bonus structure.

Adam Soldati at Purdue makes $150k according to their salary database

Just an fyi, I’m not sure the Bauerle figure is accurate. According to the open Georgia gov site, Jack pulled in over 500k last year from the university system and has pulled in around 480k for the 2-3 years before. This is not meant as a comment that he didn’t deserve that or that Looze doesn’t deserve this raise, just an observation on the actual salary figures.

Is that base salary or with bonuses? That may be why there is a discrepancy on what SwimSwam reported and your findings

With bonuses I suspect, though the reported amount was based with bonuses based on swimswam’s reporting about this from last year.

Nice that the reward loyalty and longevity along with success. Now about all those breaststroke DQs (Cody, King, and now Lazor)…

Congrats coach! Swim coaches need to get more at all levels (not just college)

I agree. Swim programs bring a lot of revenue to universities. They totally deserve to be paid in the top 2 percent of university budgets.