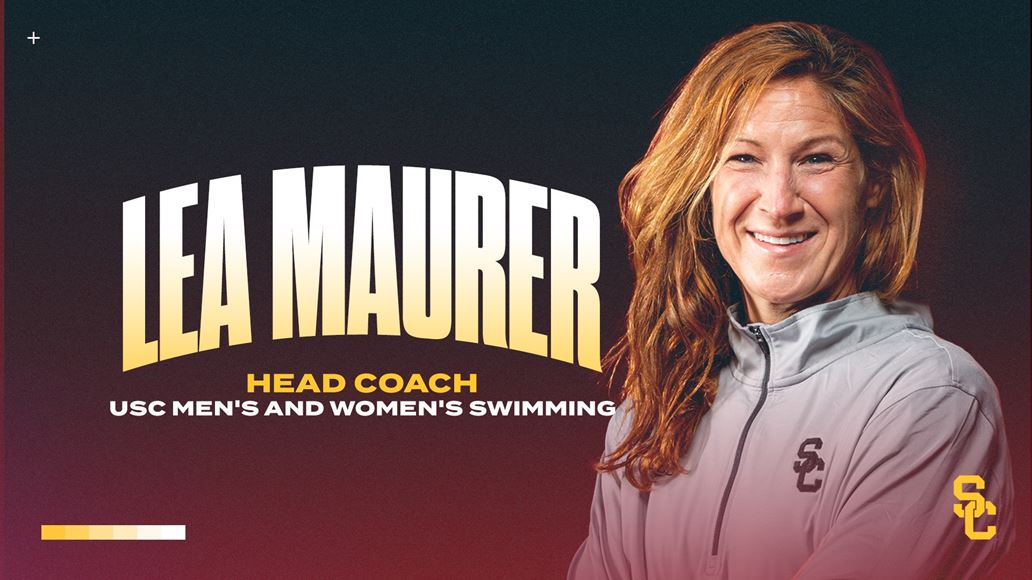 Maurer has been serving as interim head coach with the program since this past fall, when previous head coach Jeremy Kipp was placed on administrative leave. Current photo via USC Athletics

USC has announced Lea Maurer as the next head coach of the men’s and women’s swimming & diving programs. Maurer has been serving as interim head coach with the program since this past fall, when previous head coach Jeremy Kipp was placed on administrative leave. Under Maurer’s leadership this season, USC took 3rd at the women’s Pac-12 Championships, and 4th at the men’s meet. The women’s team would go on to take 16th at NCAAs, improving from their 22nd-place finish last year, while the men’s team finished 26th, better than the 27th-place finish from last year.

Maurer is an Olympic medalist, providing the backstroke leg of the U.S. women’s 4×100 medley relay at the 1992 Barcelona Olympics, which would go on to win Gold. She also won a Bronze medal in the individual 100 back in Barcelona as well. She also won Gold in the individual 100 back at the 1998 World Championships, as well as Gold in the 4×100 medley relay.

Prior to joining the USC coaching staff in July of 2020, Maurer served as the head coach of the Stanford women’s team from 2006-2012. A graduate of Stanford, Maurer was also named to the Stanford Athletic Hall of Fame in 2006.

Speaking on the hire, Maurer said “I am so excited for the opportunity to continue building on the amazing tradition at USC.” She added “Troy is such a special place, and it is with you for a lifetime. Fight on!”

USC athletic director Mike Bohn said of the hire, “We are very fortunate and proud to name Lea Maurer the permanent head coach of our men’s and women’s swimming program.” Bohn continued, saying “Lea demonstrated her tremendous leadership and relationship-building abilities over the past few months leading our teams. Her values align with our vision to be the most student-athlete centered program in the country.”

So much for the “Ray is going to USC” talk!!

I saw her Maurer in Barcelona, and I also remember Pokey Richardson. Now we need to bring back Cool-a-Coos and I’m all set.

Does anyone remember her time at Stanford? Really doing this again?

You mean when in 7 seasons the team never finished lower than 5th at NCAAs? I bet USC would take those results lol.

How about the current men’s coach at Stanford? They finished 7th this year. Are you going to start posting about him?

Can we talk about her hair in that picture? You go, Queen! It’s hot fire but I don’t think she rocks the side wave when she’s going to grab a burrito. Again, it’s a blazing fire look and she’s an American hero but I’m just saying that’s not her Monday morning practice look again… #hotfire

When you turn off the gas range in your kitchen, make sure the knob is *fully* in the OFF position. It makes a little click sound. Sheesh.

Well this is Lea Maurer’s first day on the job at USC HC so she decided not to offend any more of the fashion and style critics who took exception to the news release “glam” photo complete with hairstyle. Instead she looks like….a swim coach and a Head Swim Coach at that. https://twitter.com/USCswim

Heard jr hear first. USC will win the 200 relays at Pac 10’s. Loveless already in contract negotiations to hire the consigliere to the Gator’s Coach Steve.

Congratulations Coach Maurer. I hope you can bring some stability to this program.
I would like to hear opinions about how this hire might affect SCs recruiting both near and long term.

I have to say I’m disappointed in the hire in the fact that I think there were a number of other potential possibilities out there from the SwimSwam “Hot USC HC candidate” list. I look at results. Both USC Men and Women did not do well in the 2021 NCAA Div 1 champs and only had one direction to go: Up. Trojans started thhe 2021-22 season ranked in the mid-20’s in preseason but had strong performances to get them in the March (pre NCAA) rankings ranked #13 for men and #11 for women. time. They started strong but faded badly at the finish. Men finished 26th and Women 16th.

No one cares. She earned it.

This is such a long winded way to say nothing. Give the woman a chance to hire a staff and recruit for 3 years.

Heard a rumor she’s making a comeback to masters swimming to set national records and build a buzz with parents of swimmers. #byanymeansneccissary