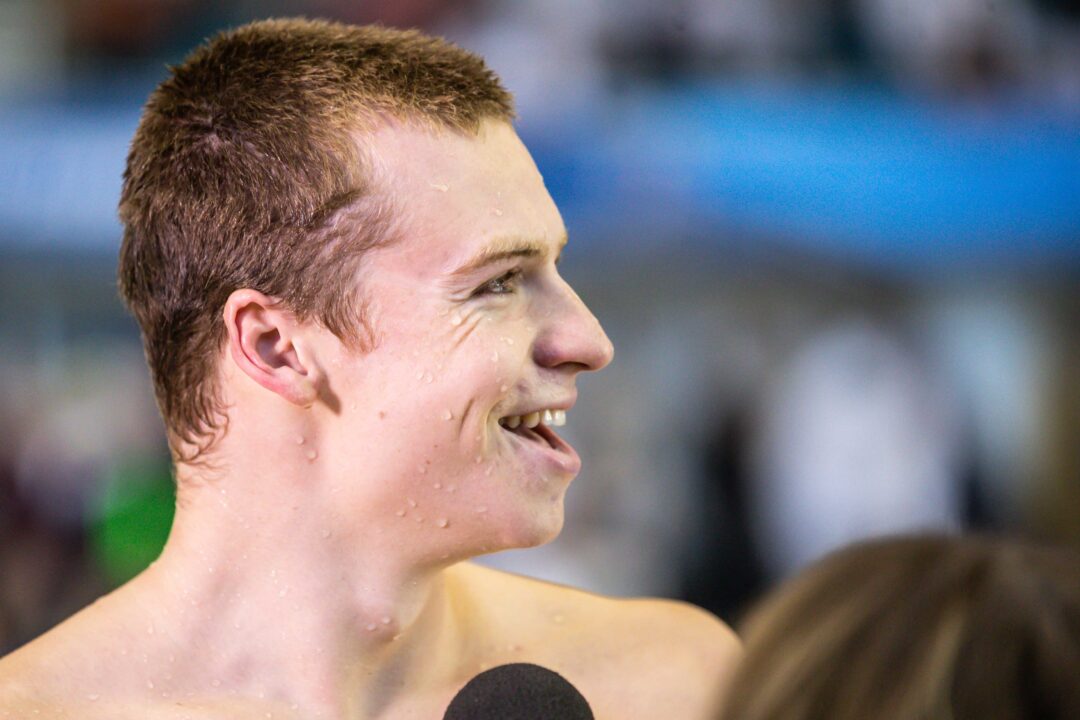 After touching first in the 400 IM on Thursday evening, Leon Marchand was disqualified. By Friday morning, that DQ was overturned. Archive photo via Jack Spitser/Spitser Photography

Leon Marchand‘s disqualification in the 400 IM on Thursday at the Pro Swim Series – San Antonio meet was overturned.

USA Swimming announced the news on Twitter on Friday morning, saying that the overturn came “after further video review.” The original disqualification was also made “after review.”

A USA Swimming spokesperson says that the appeal process began overnight and a video review was conducted on Firday morning. “After reviewing the footage, the call was overturned.”

After further video review of last night's 400 I.M., Leon's disqualification has been overturned.

Marchand’s 4:10.38 is the fastest time in the world so far this year, and won the race easily by 9 seconds. With this being his ‘exception’ meet for World Championship qualifying, that should also cement his spot in the race at the upcoming World Championships.

Marchand was DQ’d on the controversial “Lochte Rule”. If you need a refresher, the ‘Lochte Rule’ is an unpopular rule FINA put in place for IM races, named after Ryan Lochte. The rule states that underwater dolphin kicks performed on the back are classified as backstroke, meaning that kicking underwater on the back during the freestyle portion of an IM is illegal. Per FINA rules, exactly 1/4 of an IM race must be done in each stroke, therefore “swimming backstroke” by doing underwater kicks on the back results in disqualification.

FINA has taken steps to soften the rule after it received a largely negative response from the swimming community, however, it’s clearly still resulting in disqualifications. Specifically, swimmers are allowed to briefly be on their backs on the freestyle leg so long as they don’t kick until they are on their stomachs.

Marchand was named SwimSwam’s 2022 NCAA Men’s Swimmer of the Year as a freshman after winning the 200 IM and 200 breast, plus placing 2nd in the 400 IM at NCAAs. His 200 yard IM swim was the fastest in the history of the event.

I’m sure this isn’t true, but if the issue in the Lochte rule is in repeating a stroke, does that mean you can technically swim IM races in any order you want as long as you don’t repeat a stroke?

The order of the strokes are explicitly listed in the rules.

cool — thank you! I remember the instructions in age group (and maybe even high school) from 100 years ago: butterfly, backstroke, breaststroke, and any other stroke, in that order” (do they still do that?)

Since you can’t repeat a stroke, and there are only 4 strokes (butterfly, backstroke, breaststroke, and crawl) the 4th stroke has to be crawl… unless it can be the sidestroke? Not that anyone would do that in a serious race.

It can be sidestroke. I think that in theory it can be like breaststroke with a dolphin kick. It can probably be one arm butterfly. There’s lots of things it can be.

In practice, we know it always must be the crawl at any serious level of swimming. But there’s always going to be a high school kid who thinks they’re the first one to think to swim “not freestyle” on the last leg of an IM or medley relay.

Pragmatically, summer league is probably where you’re most likely to see this. There is some outside chance that you have an anchor for a relay who can swim a 50 of something else (maybe backstroke with a dive? Maybe fly?)… Read more »

a couple of times there would be a kid better at breast than free and he would anchor our medley relays, that was for 8 and unders though when for whatever reason the kid just “gets” breaststroke kick before he really figured out the rest of the strokes

Crawl is not an official stroke.
In freestyle you can do whatever you want as long as you´re on the surface. You can do doggy paddle, swim like a screw, feet first, whatever you want. Simply people realize that the crawl movement is the fastest one so far.

In freestyle events you can swim breast, fly, back, crawl, or whatever.
In the medley events, on the last leg you can do whatever you want except, fly, back or breast.

In backstroke you can do whatever you want also, as long as you are facing up, this is, you cant break the perpendicular. What I want to mean is, basically, your left shoulder can´t go to the right side… Read more »

What about walking on water?

The article above treats the spirit of the rule exactly right. However, there is definitely some clean-up to do.

If you read the stroke rules, for the IM it says, “a stroke other than fly, back and breast” for the free leg. So sidestroke is OK, as is corkscrew, or continuous somersaults.

FINA rulemaking is always reactive to real or perceived cheating. This is just one idiotic example of it.

There really isn’t a “Lochte Rule.” It’s more of a “Lochte-inspired interpretation,” and it just reiterates a rule that was already in place. The fourth leg of an IM, or a medley relay, has to be some stroke other than fly, back, or breast. The only rule for backstroke is that you are on your back, so technically, kicking out underwater on your back is backstroke. It was never an issue until Lochte started kicking off the walls on his back in freestyle races, which he did in IM’s as well. This will probably get loosened up over time, like the breaststroke pullout rules.

Except kicking on your back underwater isn’t really backstroke.

The problem is the definition of backstroke – is swimming on your back.

And just like freestyle could be Doing whatever you want, doggy paddle, the crawl, sidestroke, you can do anything you want in In backstroke as long as your head is leading and your chest is vertical. If someone want to do elementary backstroke or two arm backstroke they can, it’s not limited to back-crawl.(Braden might want to grab the official definition)

Everyone hear me out, what if the April fools article was the Lochte rule getting abolished by FINA? That would be a huge middle finger from FINA.

A huge middle finger from FINA (or the NCAA) about any topic would be the perfect April Fools …. absolutely no one would suspect it wasn’t true.

If no one likes this rule, why do the swimmer and coaches not have power to end it? there needs to be some more collaboration when unfavorable events and rules occur but no one seems to be able to question or stand up to fina

There is a process, the process just doesn’t work. The process is designed to more-or-less shield bureaucrats from the masses of membership. For a lot of things, that’s good – the public can be fickle. In a case like this, it’s bad.

Litherland has always been lucky. It needs to be reviewed again.