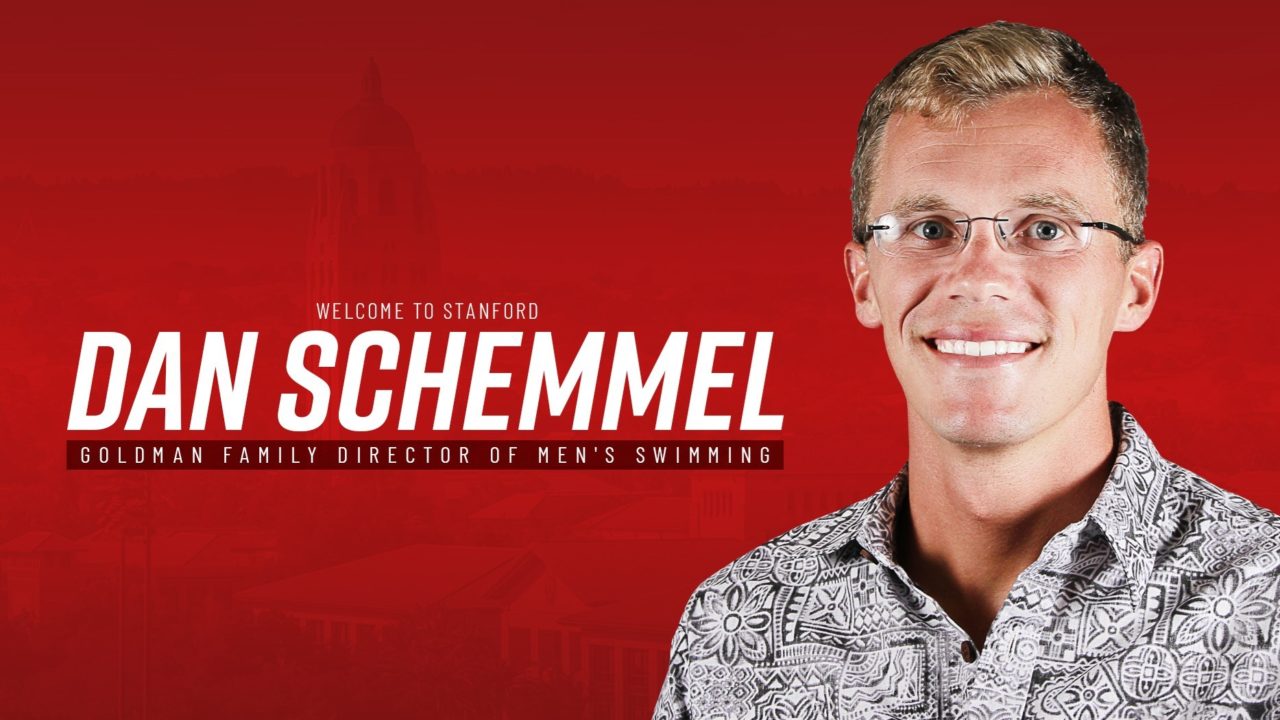 Schemmel comes to Stanford after three seasons at the helm of Hawai'i's program and five as an assistant at Wisconsin. Current photo via Stanford Athletics

A month after Stanford University men’s head coach Ted Knapp stepped down following 35 years with the program, and seven at its helm, the school announced University of Hawai’i head coach of three seasons Dan Schemmel will fill the position Tuesday afternoon.

“I am incredibly humbled and honored for the opportunity to lead the Stanford men’s swimming and diving program,” Schemmel said in the school’s release. “Stanford offers the premier experience in scholar-athleticism, combining a world-class education with the best collegiate athletics department in the country. I would like to express my sincerest gratitude to [athletic director] Bernard Muir and sport administrator Tommy Gray for believing in me and providing me with this opportunity. Within this environment of excellence, we will continue to build this program around a culture of integrity and hard work.”

Schemmel has headed the Hawai’i program since July 2016 and was named the Mountain Pacific Sports Federation Women’s Swimming Coach of the Year in his first season, as the team won the conference; the men finished third that year. The women won again in 2018 as the men finished second, and then both the women and men topped the conference last season by over 100 points.

Schemmel’s tenure also coincided with the rise of distance swimmer Phoebe Hines, who finished fifth in the 1650 at NCAAs as a junior this year, and has dropped about 50 seconds off her best time since starting college.

The Stanford men’s vacancy was the arguably the biggest gig among the 10-plus Division I NCAA head coach spots left to be filled due to the school’s location and caliber of academics and athletic talent. The Cardinal won back-to-back Pac-12 Championships in 2016 and 2017 after a four-year title hiatus but fell to recent national champion Cal by a wide margin in 2018 and 2019.

Within the Pac-12 coaching landscape now, UCLA is seeking a new head coach as a result of Cyndi Gallagher‘s retirement, and Cal and the University of Arizona are in the market for new assistants.

When will he be on campus? I think will probably decide on the assistant soon. Braden, please bring the interview with Dan discussing about his plan and recruits, etc. 🙂

David Shaw, the Stanford Head Football Coach makes close to $5 Million per year. He might even make a little more than that.

5.8 million is what I remember. which is insane. but I guess if you’re competing for recruits with Texas, Notre Dame, USC, Alabama, Georgia.. that’s what it takes. Shaw is a great coach.. but no one is worth 5.8 million.. no way Stanford makes that back in sports revenue.

Good luck to you Dan in recruiting and developing talent to the Farm!

There were two things that Greg Meehan did at the outset of his tenure (2012) that laid the groundwork for his success:
1) got buy-in from the rising upperclassmen (e.g., Maya DiRado, Felicia Lee) for his coaching philosophy; and,
2) got the #2 high school senior in the class of 2013 to commit to Stanford (2012 Olympian Lia Neal, after Missy Franklin, of course).

If Schemmel can get the rising upperclassmen aboard and recruit a real stud in the class of 2020, he will be off to a good start! I hope he can do it.

This can be tough as the admission into the school is at a very high standard and can not be done as early as the public schools. Even harder with the change in NCAArules to recruit earlier.

I’d be very surprised if Stanford was actually forced to start the recruiting process later. They tend to announce recruits later than other schools, but I’d imagine recruiting is functionally similar to other programs – verbal commitments are always contingent on whether the athlete gets admitted to the school or not.

School doesn’t start until the third week in September

I think he skipped a few grades and is only 24. SERIOUSLY, since the cow is in the barn on the farm. best wishes Dan, I HOPE you prove me and the silent majority wrong and bring Staaaanford back to the podium level at NCAAs.

Whom will Schemmel select as his assistant coach? What happens to current assistant Jeff Kostoff?

Doubt it! Good to start with a clean slate!

Congrats, Dan! Very excited to see what he can do at the Farm!

Congrats and I hope you get more than 1 year while at Stanford.

Guessing that Kostoff probably wouldn’t want to remain on staff (even if given the choice to by Dan) based on them passing Kostoff in the hiring process for HC… who knows though. Sure could help with the transition..