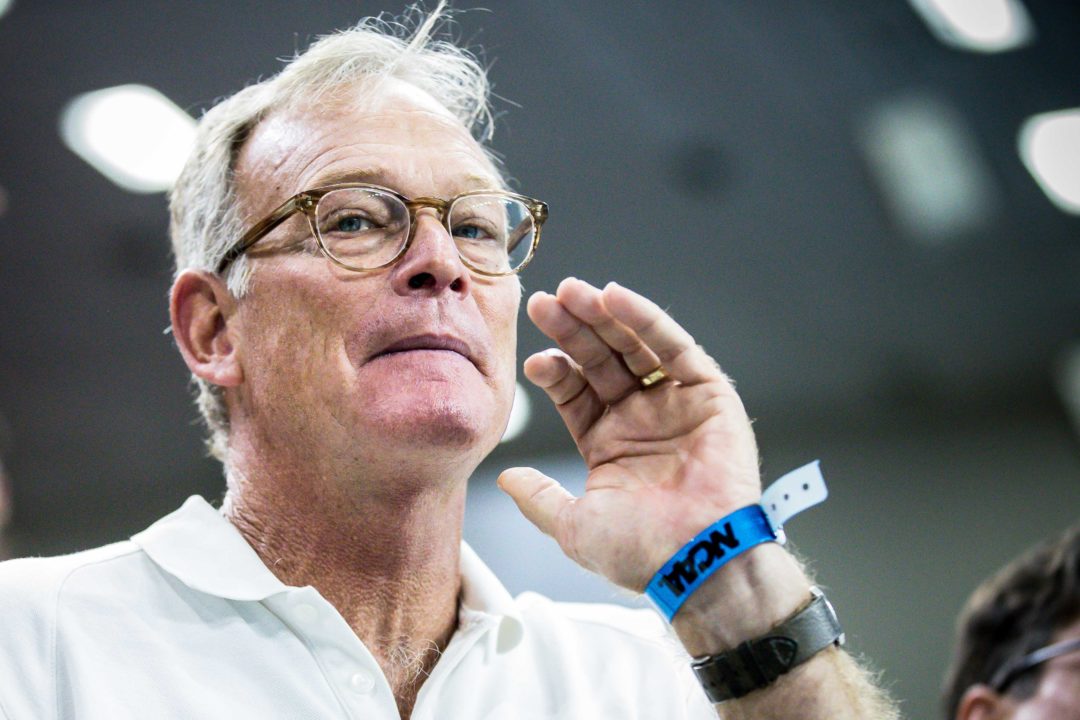 Knapp graduated from Stanford in 1981 and joined the staff as a volunteer assistant in 1984. Current photo via Jack Spitser/Spitser Photography

Head Stanford men’s swimming coach Ted Knapp is stepping down from his position after 35 years in Palo Alto, the school announced Monday.

“I would like to thank Ted for his 39 years of service to our men’s swimming and diving program as a student-athlete, assistant coach, associate head coach and most recently as our Goldman Family Director of Men’s Swimming for the past seven seasons,” said Athletic Director Bernard Muir. “Since his first season as a member of the coaching staff in 1984, Ted has earned a reputation for developing champions not just in the pool, but in life, and has overseen Stanford’s status as one of the highest-performing programs in the nation academically.”

The school says it will begin searching for his replacement immediately.

“I’ve had the extreme pleasure of coaching at Stanford for 35 years,” Knapp said. “During that time, I’ve been surrounded by so much great support within the department and the university. That support, combined with the amazing quality of student-athletes I’ve had the pleasure of coaching, has made this experience a true honor. I especially want to thank my wife, Laurie, who has been through every moment of this journey with me. I couldn’t have had a better partner. I also want to thank Skip Kenney for the incredible opportunities and successes he allowed me to share with him over the many years we spent together on the pool deck. I am confident that my replacement will possess the experience, passion and focus to successfully lead this program and plan to assist with the transition however I can.”

In addition to his NCAA duties, Knapp was involved with national teams both in the U.S. and abroad in numerous capacities over the past two decades. He was the head men’s manager to the 2008 U.S. Olympic Team, and was the men’s manager for both the 1998 Goodwill Games in New York and the 2002 U.S. Junior Team, which competed in Rome. He was named assistant manager to the U.S. team at both the 2005 and 2007 World Championships.

In the 2013 Dual in the Pool, Knapp was an assistant coach for the competition in Glasgow, Scotland, as Stanford’s Eugene Godsode competed. Knapp also served as an assistant on the U.S.’s 2015 Pan American Games team.

With Stanford’s announcement, there are now 14 Division I head coaching positions vacant this offseason:

I believe that was the diving coach, but maybe I saw a different posting than you.

Apologies. I misread the posting. It is the diving position.

Since we’re tossing around names in here, Scott Armstrong would be a great fit for the program. He knows the Men’s program after being the assistant for 4 years, and now has three years of head coaching under his belt.

Yuri Sugiyama would be a great replacement. Being on the same pool deck with Ledecky again would be awesome.

Chase Kreitler? Part of 3 National Championship teams in a row (2 at Texas, one at Cal). Great coach, lots of energy, young buck & he’s right across the Bay.

I believe if you took two of anyone’s best swimmers outside of Texas and Cal, they would move down in the NCAA’s considerably. They had a bad year but I don’t think it is Jeff. How many points did Teds swimmers score vs. Jeffs at NCAA’s. Without relay points, I would think it’s not even close.

3 top swimmers out for NCAAs.

I was surprised to see this announcement. I have a mixed emotion. I have been critical with the progress of the Stanford men’s team and the coaching during Ted’s era vs. Skip’s era. I think the swimmers were more happy with Ted’s coaching styles but they were only a handful of success stories. I hope hoping for a change similarly to the success of the Stanford women’s team.

Having said that, I read the news with a sad emotion of Ted’s retirement. He has given so much to the program’s success the past 35 years. Thank you and Congratulations on your successful career! The student-athletes have done so well in the classroom under Ted’s watch. It is time to look… Read more »

What about if Meehan moved over to the men and left Tracy to coach the women?