Rick Walker to Retire after 32 Years at Southern Illinois 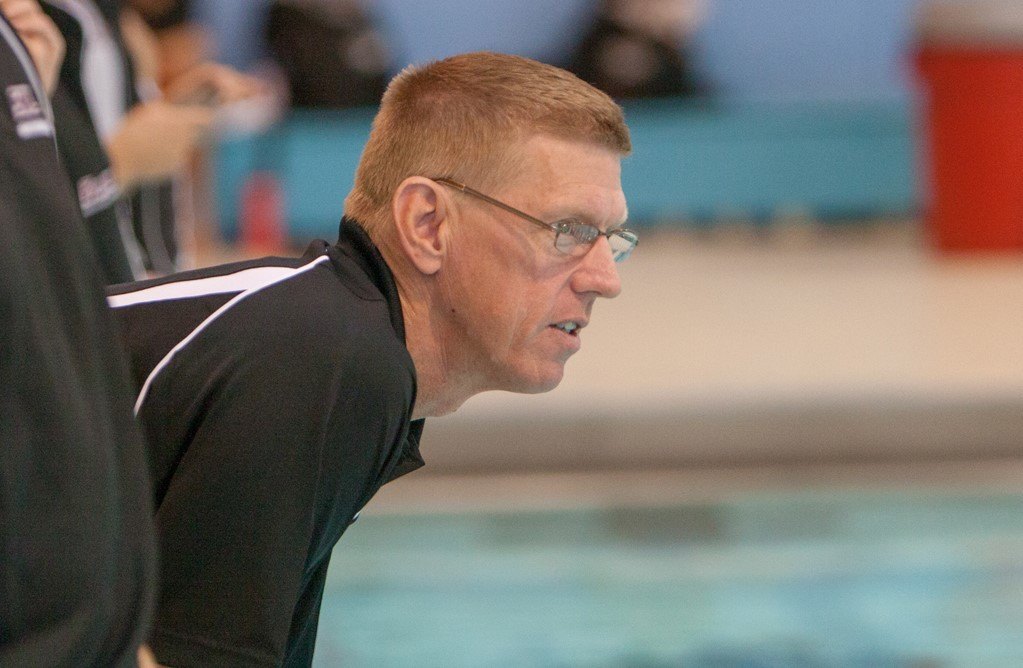 Walker has 13 conference coach of the year awards in his 26 seasons as head coach at SIU. Archive photo via Southern Illinois Athletics

In that time, he has coached 237 athletes to conference titles, an additional 209 athletes to all-conference honors, and 8 swimmers to represent various countries at the Olympic Games. He earned 13 conference coach of the year awards in 26 seasons as a head coach:

The last decade of Walker’s tenure at Southern Illinois has been a roller-coaster. The peak was the women’s title in 2016, but the lows include being hit with significant NCAA penalties, including a suspension for Walker during the 2018-2019 season, after improper benefits were given to two student-athletes by the program’s diving coach; and the loss of 3.9 out of a possible 9.9 scholarships for the men’s team as part of budget cuts driven by a financial crisis in the state’s educational system.

But the latest news for the program is positive: in January, the program announced that they would soon be able to endow a swimming & diving scholarship thanks to the donation of program alumnus Susie Rashid, who finished her eligibility at SIU the season before Walker arrived.

CARBONDALE, Ill. — Head coach Rick Walker announced that he plans to retire at the conclusion of the 2018-19 season, after 32 years with the Southern Illinois swimming and diving program. He joined the Salukis in 1987 and became the head coach of the men’s team in 1992 and added women’s head coaching responsibilities in 2005.

Walker has coached 237 athletes to individual and relay conference titles and an additional 209 athletes to all-conference honors in his 26 seasons as head coach. Eight of his swimmers have went on to compete at the Olympics.

“Coach Walker has established himself as a Saluki legend over the last 32-plus years,” said Senior Woman Administrator Liz Jarnigan, who directly oversees the swimming and diving program. “His student-athletes have consistently achieved in the classroom, the community and the pool. As a result, he has helped to set the Saluki standard of excellence for the entire department. While he certainly deserves to retire after his years of service to SIU, he will absolutely be missed. We wish him the very best.”

21722″When you are this many years in, it does occur to you that it will come to this point (retirement),” Walker said. “The thought of retirement has been in my mind, but I am too busy trying to have fun with the time I have left. I have loved this since the day I got here, each and every day, and want to go out loving it.”

Walker has also won nine conference championships during his tenure. The men’s team won five-straight MVC titles from 1994-1999 under his direction, the longest streak in the conference history. He won three more MVC titles in a six-year stretch from 1999-2004 with the men’s team. His most recent championship came in 2016, when he coached the women’s team to a Valley title by .5 points over Missouri State.

His athletes have achieved numerous honors in the classroom and community as well. Under Walker’s tutelage, SIU produced nine Academic All-Americans and the College Swimming and Diving Coaches Association of America has selected the Salukis as a Scholar All-American Team every semester since the fall of 2011.

The Kankakee, Ill. native came to southern Illinois in 1987 as an assistant for the swimming and diving program. During that span, he coached former women’s head coach Jeff Goelz and his former assistant Gustavo Leal. Goelz earned multiple All- American honors under Walker’s tutelage. During that span, the Salukis also advanced to the NCAA Championships twice, finishing 18th and 27th.

“For me, part of my philosophy is that winning a championship is really won from the bottom up,” Walker said. “I heard a phrase the other day talking about how the twig starts the fire that will take down a forest. When we are up against a forest, we need the twigs to start that fire. So I love that about our team. It is about everybody pitching in.”

Before joining Southern in 1987, Walker had an impressive swimming career. His college career began at Indian River Community College in Fort Pierce, Fla., where he was a seven-time All-American and set NJCAA records in the 500-free, 1000-free, 1650-free and the 4×100 and 4×200 free relays. He then transferred to Texas A&M for his two remaining years of eligibility and set school records in the 500-free, 1000-free, 1650-free and 400-IM. Those marks qualified him for the NCAA Championships. Walker went on to graduate from Texas A&M in 1984 with a degree in recreation and parks.

In international competition, Walker competed at the 1980 Olympic Trials but could not compete in the Olympics due to the U.S. boycott. He qualified for the 1984 Olympic Trials but retired just prior to the event. He was also a silver medalist at the Olympic Sports Festival in 1979, participated in the 1978 USA Olympic Training Camp and held a top-50 world ranking in the 1500-free in 1981.

21723In addition to coaching at SIU, Walker has partook in several coaching opportunities globally.

He led the United States National Team to the 1998 World Aquatics Championship in Australia and fourth place finishes in 2001 and 2003.

He was named head coach of the Egyptian Olympic swimming team for the 2012 London Olympics and was a 14-time member of the USA Swimming Olympic Committee and a five-year chairman on the USA Swimming Open Water Committee. In 2009, he was honored as the America Continental Open Water Swimming Man of the Year.

Furthermore, Walker served a seven-year term on the NCAA Swimming and Diving Committee and took the lead in the process to place open water swimming in the 2008 Olympic Games in Bejing, China.

Walker recently led the Salukis to conference wins over Evansville at Shea Natatorium in the final home meet of his Saluki coaching career and now gears up for conference season. The women’s team will compete from Feb. 20-23 at MVC Championship in Columbia, Mo. and men’s team will travel to Oxford, Ohio for the MAC Championships form Mar. 4-7.

“When you come into a job, you have these high hopes and everything, but I wouldn’t have thought I’d experience this extent of success, have met the quality of individuals that have came through here and the tremendous human beings that have left here and are doing great things outside of SIU today,” Walker said. “You couldn’t have asked or predicted for anything more than that.”

A “Tip of the Goggles” to you…Congrats and enjoy your retirement!

Rick is a Class Act from the Get Go! One of my favorite coaching moments/quotes was when I was the distance coach at Iowa & Rick held the same position at SIU. In a men’s dual meet, after the 1000, one of Rick’s swimmers, who had not had a particularly good result, came up to Rick, shrugged his shoulders and said “What happened?” to Rick and Rick, without a moments hesitation retorted “Heck, you swam it, you tell me!” PRICELESS….and still used to this day, I might add! A great reminder that we sometimes have to let the swimmer’s own their results, good & bad. Thank You Rick, for that lesson so early in my college coaching career! Congratulations on… Read more »