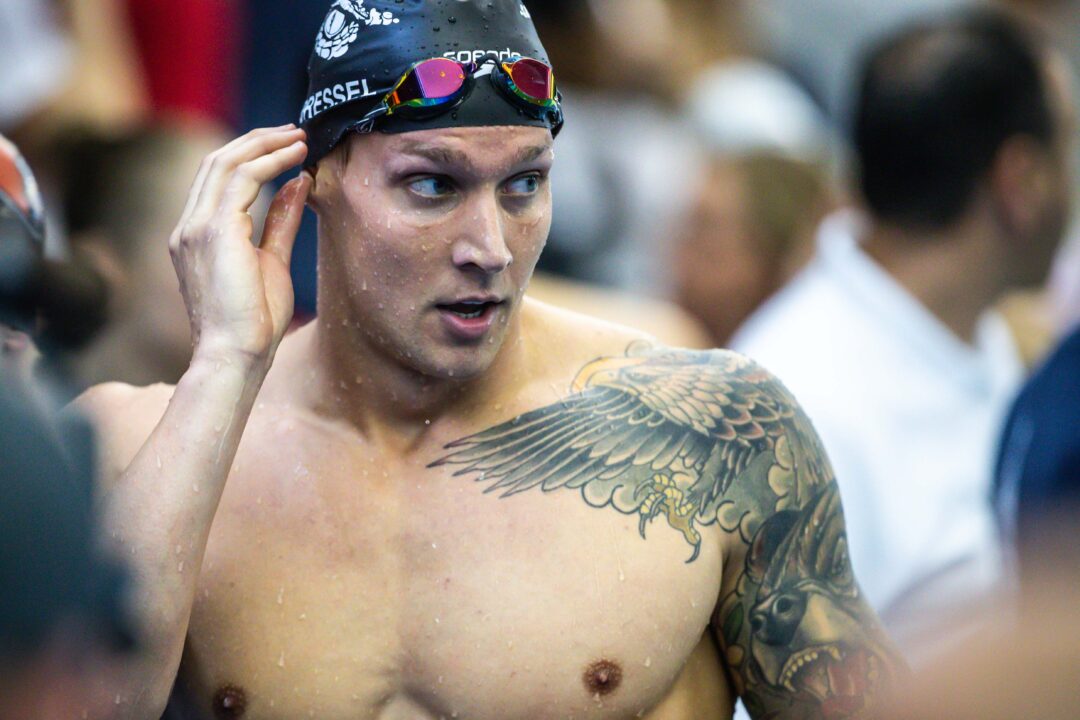 The reigning two-time world champion will not be defending his title in the men's 100 freestyle at the 2022 World Championships in Budapest. Archive photo via Jack Spitser/Spitser Photography

Reigning two-time world champion Caeleb Dressel will not be defending his title in the men’s 100 freestyle at the 2022 World Championships in Budapest.

Dressel is a late scratch out of the semis, appearing on the initial version of the heat sheet but then missing minutes later once it was revised.

A decision has been made by Team USA in consultation with Caeleb, his coach, and the team’s medical staff for him to withdraw from the 100-meter freestyle event on medical grounds. The team will determine his participation in the events later in the week.

The 25-year-old has won the event at the last two World Championships along with the Tokyo 2020 Olympic Games, and is the only swimmer in history to break 47 seconds in a textile suit.

Dressel was ranked second coming out of the prelims in a time of 47.95, trailing Romanian David Popovici (47.60).

The matchup was one fans were anxiously anticipating, especially after Popovici’s dominant victory in the 200 free on Monday.

With Dressel’s scratch, South Korea’s Hwang Sunwoo, who won silver behind Popovici in the 200 free, gets bumped up into the semi-finals after tying for 17th in the prelims in a time of 48.61.

Hwang tied with Australia’s Zac Incerti, though it appears Incerti scratched to avoid a swim-off for first alternate. Incerti was dealing with an illness earlier that kept him off the Aussie 400 free relay.

Dressel is also scheduled to race the men’s 50 free and 100 fly individually later on in the competition, with both prelim heats running on Thursday morning.

Maybe his T.U.E. and nebulizer was acting up as he was seen spitting nasty near to the other swimmers before the 50 fly final.

I am appalled at reading alot of these posts.
I am not in favor of censorship.
I’ve always held swimmers, swimming fans and the entire scene as real sport, real sportsmanship, decency, intelligent, and everything but mean.
Caeleb Dressel is a wonderful human being period.
There isn’t a reason in the world to turn on him over perhaps just being sick and honoring himself and the trainers recomendations.
Anyway thankyou to the majority of decent people on here.
This is swimming.
Not the Kardashians!

If Dressel isn’t 100% then Popovici would not have been his only concern. Looking at the semi times, he might not even have medalled.
The race builds.
If all protagonists will be well and ready for 2023/2024, it will be a hell of race.
Chalmers as well.
And not to dismiss current youngsters Whittle and Southam. Others too.
Expect the US to also produce another quick man soon.
Things moving to 46 soon.

At least she was specific about her ailment.

LeClos too but he’s arguably past his peak already. would love to see him swim more 200 free rio style races tho

Caleb will never be Phelps. Someone who cowered to the younger kids. Remember Schooling and how Phelps was? This is beyond embarrassing.

I’m a Phelps fan but he busy getting DUI’s and showing up to practice randomly when he was Dressel’s age.

Don’t blame him was going to get loose to a 17 year old.

17 yo skinny boy from Romania to be more accurate

He wasn’t going to “loose” an event to anyone, least of all a twig.

Tony is a Dressel superfan and totally in denial.

Shame one ANY of you who would even joke about Caeleb being afraid to lose to popovici. What an embarrassment this comment section is right now. I love how a bunch of anonymous keyboard warriors (probably most of whom are 50lbs overweight and never swam at any level even close to Caeleb) disparage and attack someone without any facts or insider information. SMH.