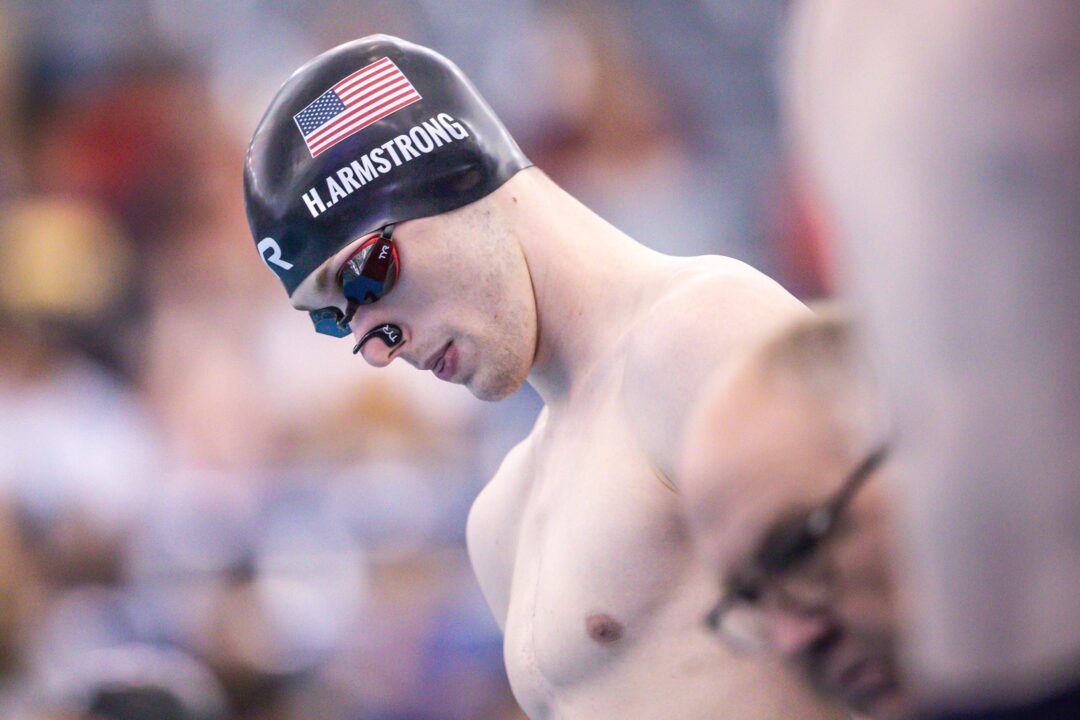 For the first time since 2015, the United States has opted for a male-male-female-female order on a mixed medley relay final. Archive photo via Jack Spitser/Spitser Photography

The lineups for the finals of the mixed medley relay have been released, with many notable changes from prelims.

The United States, on a rare occasion, is leading off with two males and finishing with two females. Although this is widely regarded as the tradtional order for a mixed medley relay lineup, this is the first time since 2015 that the U.S. has put it into play in the finals of the relay. Notably, Hunter Armstrong is swimming back in finals while Ryan Murphy was on the prelims squad, even though Murphy finished ahead of Armstrong in the individual 100 back. They opted not to use Regan Smith, most likely because she had the 50 back and 200 fly semifinals in the same session tonight.

Caeleb Dressel is missing from the U.S. relay, which makes sense given that he also scratched the 100 free semifinals in this finals session.

Australia has opted to go with Shayna Jack over Mollie O’Callaghan on the freestyle despite O’Callaghan having a faster best time. However, O’Callaghan is also set to swim the 200 free finals in this session whereas Jack does not have any other conflicting events. The same goes with China using Cheng Yujie over Yang Junxuan despite Yang being faster, most likely because Yang is also in the 200 free final.

Italy seems to be frontloading their relay, putting their best two male swimmers on back and breast. With Thomas Ceccon and Nicolo Martinenghi being the world champions in the 100 back and breast respectivley, expect them to have a huge lead at the halfway mark.

Great Britain opted to use Freya Anderson over Anna Hopkin, who anchored their world-record breaking Tokyo relay last year. Anderson has been faster than Hopkin at this meet, having split 52.70 on the 4×100 free relay.

The only female breaststrokers in this relay tonight will be Germany’s Anna Elendt and Japan’s Reoana Aoki.

Zhang with the double

I like the US lineup 3 newer faces and one old guy. Time to let go of Dressel carrying you

Reona Aoki is a female breaststroker…