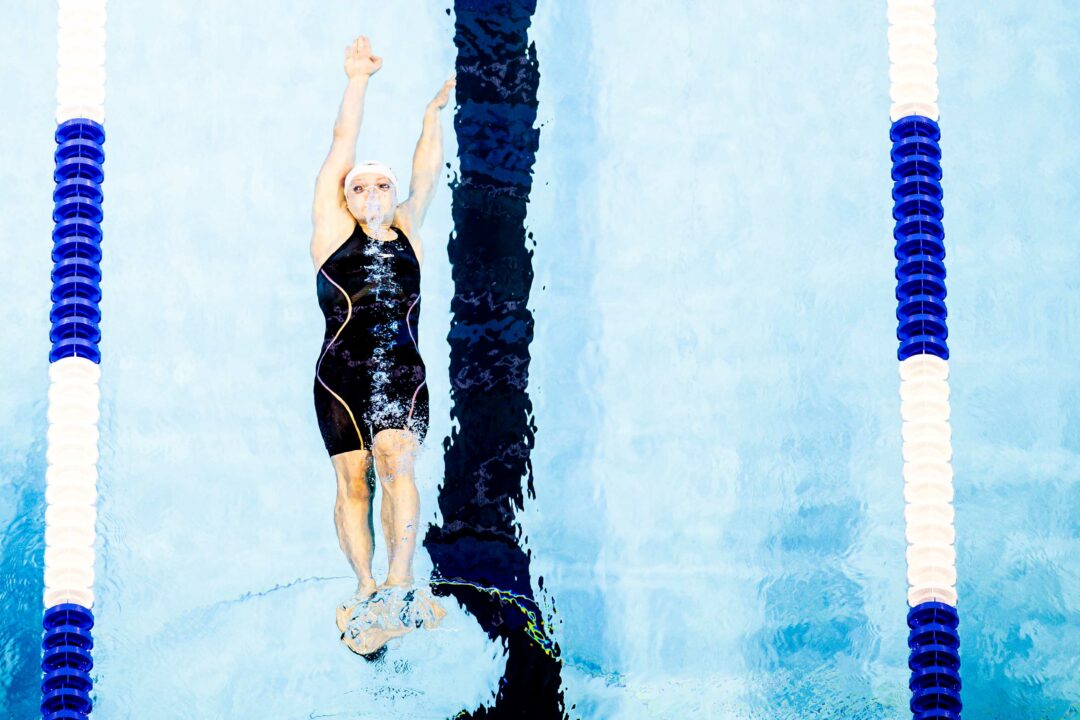 Rhyan White and Phoebe Bacon shared Saturday evening after an exhilarating race that saw them upsetting world record Regan Smith for the win in the 200 back. Current photo via Jack Spitser/Spitser Photography

Rhyan White and Phoebe Bacon spoke with the press Saturday evening after an exhilarating race that saw them out touching world record Regan Smith in the 200 back.

Asked about the depth in the women’s backstroke events in the USA, White said “I like it. It’s kind of fun to just say, like, it’s anybody’s game. There’s never someone that you know is going to win every time, so it’s not like tossing a bone to someone who’s getting 2nd.” Bacon echoed White’s thoughts, adding that the tighter races tend to get the crowd going more.

Bacon acknowledged that she never really imagined she’d make the Olympic team in the 200 back, traditionally focusing more on the 100 back, but said she’d been incorporating different kinds of training over the past year that’s really helped her 200 back.

In doubtedly the biggest upset of the meet, Rhyan White is the Olympic Trials winner in the women’s 200 backstroke and reigning world champion and world record holder Regan Smith won’t swim the event in Tokyo.

The top-four swimmers were tight through the first 150—Smith led the way, with White, Phoebe Baconand Isabelle Stadden trailing close behind.

After Smith flipped first by two tenths at the final turn, White took off down the final 50. White pulled into the lead, and then all of a sudden, Bacon began moving past Smith down the stretch.

White, who trains at Alabama, ended up winning by a decisive 73 one-hundredths of a second, clocking 2:05.73 to demolish her previous best of 2:07.07 and become the third-fastest American woman of all-time. The 21-year-old also moves into third in the world this season.

White was by far the fastest closer in 31.96, and Bacon ended up being the only other swimmer in the field sub-33, as the rising Wisconsin sophomore came back in 32.67—more than half a second faster than Smith—to snag second in 2:06.46 and qualify for the Olympic team.

Bacon’s previous best time was a 2:06.84, set at Pro Swim Series meet in Indianapolis in May, where she notably out-touched Smith by a few one-hundredths.

Kathleen Baker misses out in her final opportunity to make the Olympic team, taking fifth in 2:08.78.

NOPE!! Kaylee has no real oppenent in this event

Sadly i agree. The US women will again need the race of their lives to hold her off.

That’s right Bacon! It’s anyone’s race at any given time! We witnessed many upsets. These trials are not about the past, they are about the future and may the best athlete during these trials represent the USA in Tokyo! Each had 3 chances to be number 1!

15
-15
Reply
The Importer AND Exporter

I’m shocked by the amount of shade being thrown at Smith – we need the gossip to come out!

12
-24
Reply
Same Same
Reply to  The Importer AND Exporter

Oh please, just stop. She’s a 19 year old kid from MN – what crazy gossip do you possibly think is going on? She shouted at someone once?

32
-3
Reply
SwimmerNotSwammer
Reply to  The Importer AND Exporter

We need that tea imported

What gossip? Regan Smith did not perform at the 2021 Olympic Team Trials to the standards set at the 2019 FINA World Aquatics Championships.

6
-2
Reply
anonymous
Reply to  The Importer AND Exporter

Regan has made 2 individuals and 1 maybe 2 relays (mixed medley). No room for shade. She has been terrific. Looked like she ran out of gas that is it.

Several of us predicted that Regan would look better in butterfly than backstroke. One of the biggest surprises to me was that Flickinger held off Regan in the 200 butterfly. But Regan never established enough of a margin. Regan needs to understand she’s never going to finish as well as surrounding lanes. Without a body length lead the result is going the other way. Bacon, White and Regan have been in one tight finish after another at 100 and 200. Somehow everyone preferred to ignore all of those races and assign Regan 2-3 extra seconds based on one meet two years ago.