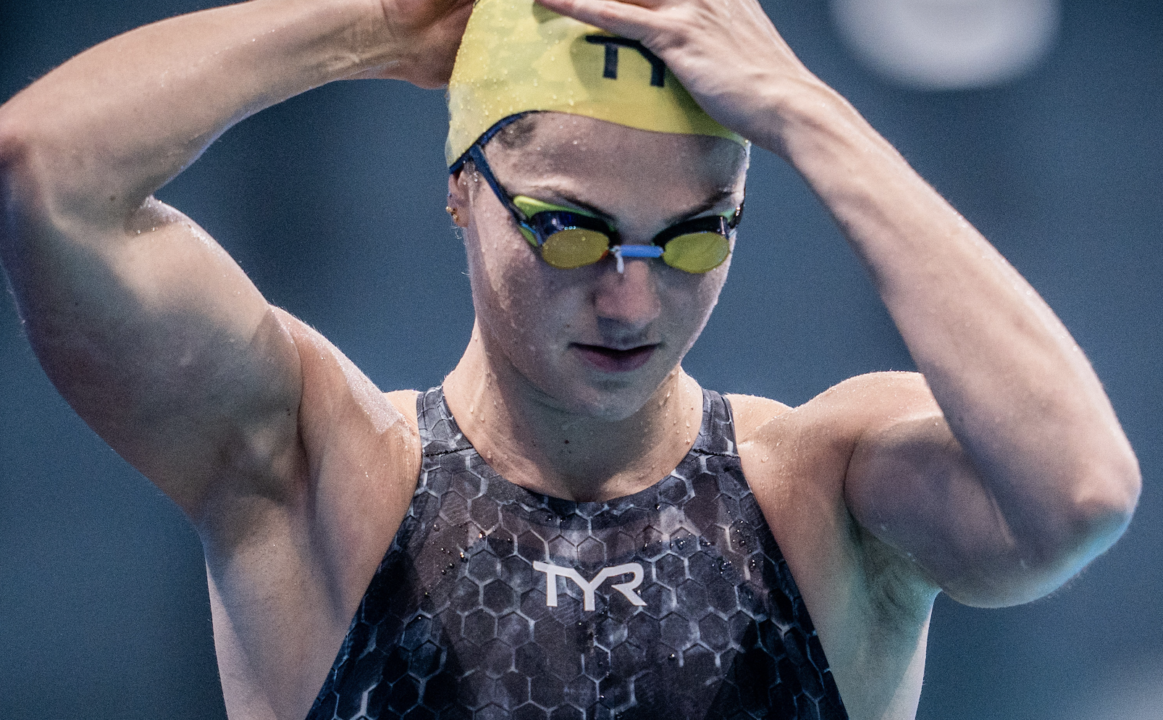 Follow along live for the final night of racing at the 2021 French Olympic Trials - the last chance for swimmers to qualify for Tokyo 2021. Archive photo via Mine Kasapoglu

It’s the 12th and final session of the 2021 French Elite Swimming Championships and we get one more look at the fastest swimmers in France.

One of the biggest storylines of the meet will be Beryl Gastaldello‘s effort to qualify for her first individual event in Tokyo. After just missing the 100 butterfly, 100 backstroke, and 100 freestyle, she will need to fend off the likes of Charlotte Bonnet and Marie Wattel in the 50 freestyle.

Additionally, Leon Marchand will be back in the 200 IM as she attempts to add a 3rd Olympic event following impressive performances in the 200 fly and 400 IM earlier on in this meet.

Joly was followed here by Joris Bouchaut who put up a solid race but wasn’t fast enough to catch up to Joly, ultimately hitting a 15:08.96 for the silver medal. Tommy-Lee Camblong rounded out the podium here with a 15:19.00.

Tunisian swimmer Ayoub Hafnaoui was also present in the finals, racing a 15:20.28 which was the 4th time overall. That was a bit over Hafnaoui’s entry time in the event of 15:17.42 and well over the Tunisian national record of Oussama Mellouli which sits at a 14:37.28 from back in 2009.

It looks like Maxime Grousset will officially be racing the men’s 50 freestyle in Tokyo now that he has successfully qualified by hitting a 21.74 in the finals at the 2021 French Olympic Trials.

That time for Grousset is under the 22.01 FINA A standard, marking his second time under the cut today after his 21.94 in the prelims.

Florent Manaudou was silver in the final with a 21.84, also undercutting the FINA A, and affirmed his pre-qualification for Tokyo in the event. Manaudou was named to the team back in December and will be racing at his 3rd Olympic Games this summer.

Manaudou will have a shot at collecting his 3rd straight Olympic medal in the event, having won gold in 2012 and silver in 2016.

Clément Mignon followed in the final with a 22.38 for the bronze medal which is a little slower than the FINA A. After Mignon, Charles Rihoux swam a 22.45 for 4th place and Nikita Baez rounded out the top 5 in a 22.52.

Beryl Gastaldello couldn’t quite pull off a top 2 finish here, barring her from competing the 50 free individually in Tokyo. That marks 4 events where she was just off individual qualification including the 50 free, 100 free, 100 back, and 100 fly.

Gastaldello touched in 4th place with a 24.97 which was quicker than the 25.08 she swam in the morning but not fast enough to beat the top 3 women.

Taking the gold medal, Marie Wattel delivered a 24.54 to hover just 0.20 seconds over Melanie Henique‘s 2020 French record in the event. Wattel looks to have qualified for 3 events in Tokyo now as she’s cracked the FINA A of 24.77 and previously made the team in the 100 free and 100 fly.

Henique also swam in the final and touched just 0.03 after Wattel with a 24.57, adding a bit of time to her morning swim of 24.55. Henique had already qualified for the 2021 Olympics in this event and was named to the team back in December 2020.

Also getting in ahead of Gastaldello, Charlotte Bonnet swam a 24.78 for bronze which was just 0.01 seconds over the FINA A cut. She will race the 100 and 200 freestyle individually in Tokyo.

Adding to his qualifications in the 200 fly and 400 IMs earlier on in the meet, Leon Marchand has successfully added the 200 IM to his Olympic program in Tokyo.

Marchand swam his way to a 1:58.03 victory here to nab the gold medal, get under the 1:59.67 FINA A cut, and get within striking distance of Jeremy Stravius’ French record of 1:57.89. The swim was an improvement upon Marchand’s best time heading into the meet of 1:58.97.

Switzerland’s Jeremy Desplanches has the second-fastest time overall with a 1:59.23 to trail his entry time 0of 1:56.89 by a couple of seconds.

With Desplanches ineligible for the silver medal as he is not French, Mewen Tomac will take silver, having hit a 1:59.75 for 3rd overall. That swim was an improvement upon his morning swim of 2:01.01 but wasn’t quite under the FINA A standard.

Tomac is currently qualified for Tokyo in the 100 and 200 backstroke after his double national title-winning performances in those events earlier on in the meet.

Rounding out the podium, Enzo Tesic nearly cracked 2 minutes but was just short, hitting a 2:00.51.

Neither of them got under the FINA A cut of 2:10.39 and will therefore likely not be adding the 200 backstroke to their lineups.

Second place here was Fanny Borer who was also near the Olympic-qualifying cut but ended up swimming a 2:13.10 for the silver medal.

Following a solid prelims swim in the men’s 100 butterfly of 51.18, Mehdy Metella returned for the final and hit a 50.87 to win the gold medal and add his name to the Olympic roster in the event.

Metella was only 0.02 seconds over his French record from back in 2019 and has shown here that he’s back in top form after a debilitating shoulder injury in 2019 that required him to undergo surgery. He was out of the pool and in recovery for the majority of 2020 until making his comeback in October of that year.

Metella’s swim here at French Nationals is quicker than what he swam in the final at the Rio 2016 Olympics where he hit a 51.58 for 6th place. Additionally, the swim makes him the 5th fastest man in the world this season which should be a confidence booster for Metella heading into the Games.

Metella was the only man in the heat to crack the FINA A standard of 51.96 and he was joined on the podium by Nicolas Vermorel who swam a 52.52 for silver and Stanislas Huille who was a 52.86 for bronze.

wow Metella back from his injury with 50.87 very close to his best, 100 fly has gotten so fast and deep this year, so many swimmers under 51

The best chance of medal in Tokyo is Léon Marchand in the men’s 400 IM.
Next why not a good surprise from Manaudou, Grousset, Ndoye-Brouard and the women’s 4X100 free relay?
Tokyo is just a step before Paris 2024.

Ok. The meet is over.
Of course there are many events where the French level is bad but honestly I’ve also seen some very good performances.
We will not look terrible in Tokyo as we could fear it. One medal is the goal.
And there’s a new talented generation coming for Paris where it will be another story in terms of goals.
Béryl Gastaldello was far from her best level this week. Maybe I’m wrong bu looks like she peaked for ISL.
Léon Marchand’s 4.09.65 in the 400 IM has been the best performance of the meet. This young guy has no limits.
I’ve been also impressed by our young female backstrokers and especially… Read more »

Maxime Grousset is a star in the making in the 100 free.
And Yohann Ndoye-Brouard can become one of the 3 backstrokers in the world.

I really think that being an ISL superstar is going to be more and more worth it. You get a suit deal, team salary and prize money.

I mean, they would have to be actually paying people…

So happy for Metella after his injury struggles!

50 point anything is serious stuff.

Metella 50.8 , that battle for bronze in tokyo will be fascinating

50 low flat for bronze as dressel and.milak will go 49

Temple has to be in the mix now for bronze. I still think Milak will have a say in the 100 fly however fast Dressel is going in the US trials.

I don’t think a medal is possible for Metella.

And qualifies for Tokyo in the 100 fly.

So your prediction of 1:55 was only off by about 2 seconds …
I guess your other predictions for french swimmers will look equally absurd in hindsight.

I admire Bobo’s enthusiasm when he writes about Swimming. Sometimes I have different opinions but he gave some good insights during these French Nats.

Hénique has explained that she has lost her goggles at the start of the 50 free.