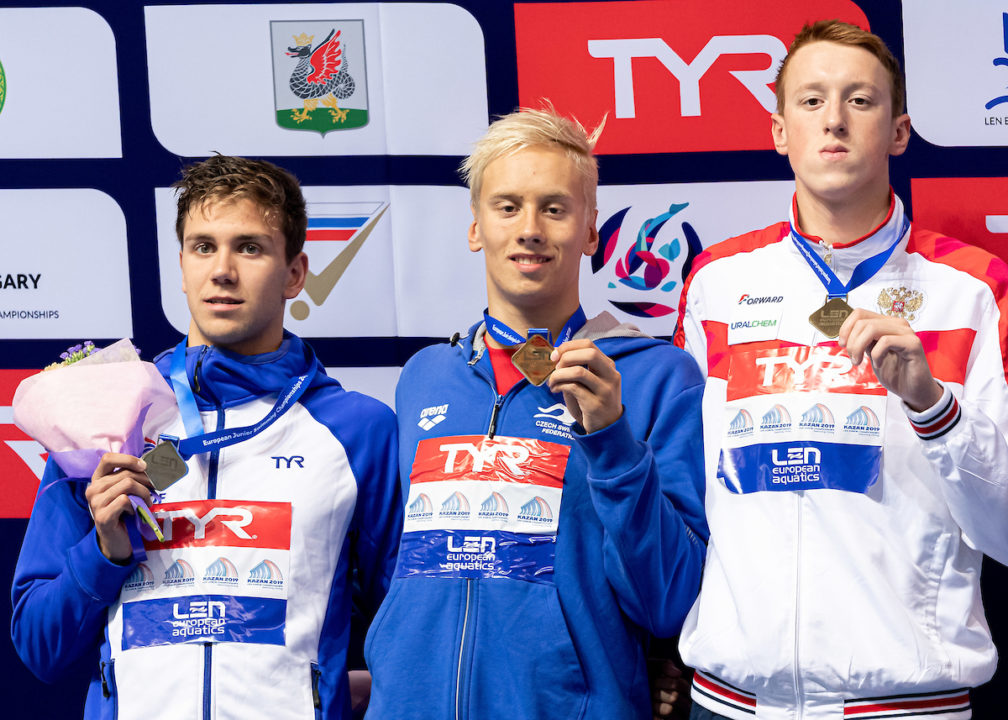 Tomac and Bonnet both added a second individual to their Tokyo 2021 Olympic lineup on day 5 of the 2021 French Olympic Trials. Archive photo via G.Scala/Deepbluemedia/Insidefoto

The second last day of the 2021 French Olympic Championships concluded with no new swimmers joining the Olympic team. 2 swimmers who had previously qualified in the form of Charlotte Bonnet and Mewen Tomac, however, swam under the required qualifying times in their respective events, thus adding another event to their lineup.

Tomac won the national title in the men’s 200 backstroke with a 1:56.82 to undercut the 1:57.70 Olympic cut that he needed. That was Tomac’s second win of the week meaning that he has now qualified to race both the 100 and 200 backstrokes in Tokyo.

“Having already qualified for the 100m backstroke, I had nothing to lose! Suddenly, I told myself to go quickly and see if it holds” said Tomac after the race. “I was in a lot of pain at the end, but I’m happy with the time and did what I wanted to do.”

Prior to the meet, Yohann Ndoye Brouard also had a spot on the team in those 2 events giving France a full slate of backstrokers this summer at the Games.

Like Brouard, sprinter Marie Wattel also had a spot on the team heading into this meet, having qualified to swim the 100 free and 100 fly back in December. Wattel swam to victory in the women’s 100 free at 2021 Nationals in a 53.34 and was followed by Charlotte Bonnet who hit a 53.71 for the silver medal. That swim for Bonnet is under the 54.38 qualifying mark, marking her second Tokyo cut of the meet after her 1:56.67 200 free earlier in the week.

Bonnet spoke after the race about the distribution to the meet that occurred on Friday morning when the bulkhead separated from the starting blocks, causing a cancellation of the 100 freestyle prelims.

“It didn’t help me because I like doing a first 100m in the morning to make adjustments and see how I feel. But hey, there you have it, we had to adapt. And then, it was the same for everyone. I think the federation teams have done their best to get the competition back under the best conditions. It was obviously not ideal, but this incident had to be dealt with”

Bonnet has been officially added to the team in the 100 free but it’s notable to point out that Beryl Gastaldello swam a 53.40 earlier this season to win the 100 freestyle at the 2020 French Elite Championships. That time was quicker than Wattel’s silver medal swim of 53.72 but slower than the 53.32 that Wattel posted in March 2021. That means that while Gastaldello had the fastest time across both qualifying meets and the second-fastest time country-wide this season she won’t be on the team individually for the 100 freestyle.

Gastaldello will likely swim as a member of the 4×100 freestyle team in Tokyo for France and will be joined on that relay by Wattel, Bonnet, and likely either Anouchka Martin or Margaux Fabre who tied for 4th with a 54.95.