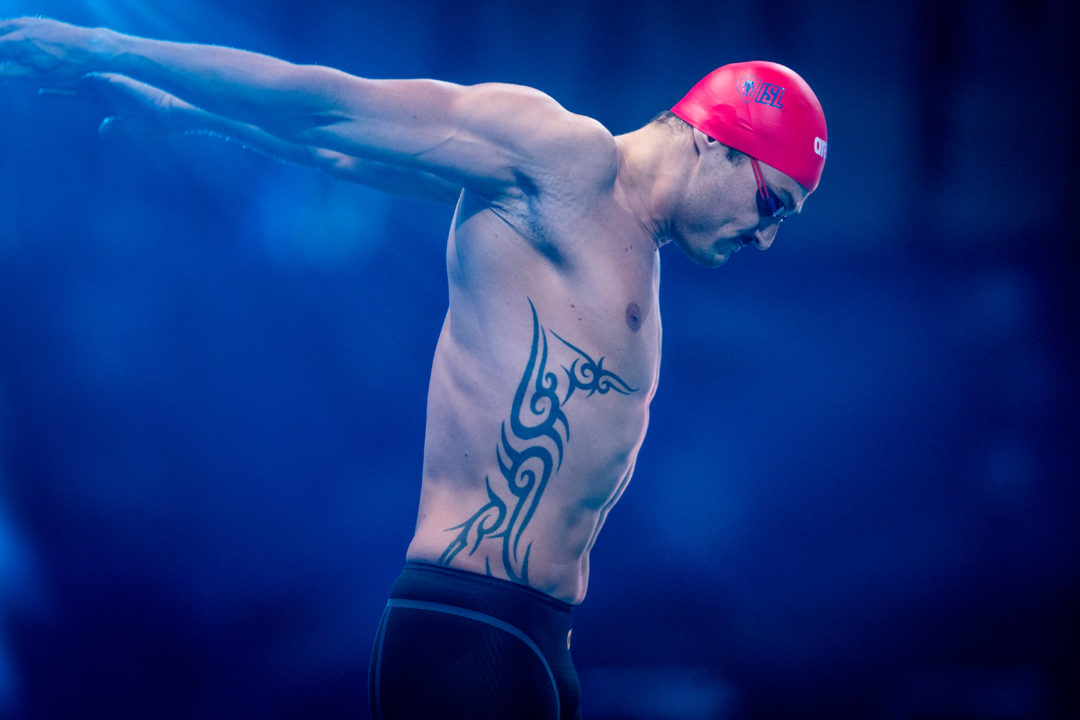 Follow along live for the prelims during the final day of racing at the 2021 French Olympic Swimming Trials in Chartres, France. Archive photo via Mine Kasapoglu

It’s the 6th and final day of racing at the 2021 French Elite Championships and France’s quickest athletes will have one final shot at qualifying for the 2021 Olympic Games.

After an interruption during day 5 prelims when the bulkhead separated from the wall. The problem was fixed in time for finals and is expected not to be an issue today.

After qualifying for the French Olympic team in the 100 freestyle earlier in the meet, Maxime Grousset has set himself up nicely to nab a spot in the 50 freestyle as well by getting under the FINA A standard in the event with a 21.94 in the prelims.

Grousset swam a solid sub-22 which was nearly a PB for him as he neared the 21.86 that he swam in July 2019 at the Gwangju World Championships.

Right behind Grousset, Florent Manaudou swam a 22.20 in the final prelim to established a second seed heading into the final. Manaudou has less pressure to perform during the final, having already been named to the team in the event.

Manaudou has an impressive record in the 50 freestyle at the Olympics, having won gold in the 50 in the event in 2012 and silver in 2016.

2 more men will be trying to catch Grousset during the finals of the event after swimming under the prelims standard. Charles Rihoux delivered a 22.36 in the heat, followed by Clement Cute with a 21.37. Belgium’s Jasper Aerents rounded out the top 5 with a 22.51.

French record holder Melanie Henique led the way here with a 24.55 to get 0.21 off her NR of 22.34. Henique will have a shot at lowering that record tonight and has actually already lowered one of her French records this week, breaking the 50 butterfly with a 25.17.

As has Manaudou, Henique has already been named to the Tokyo squad for the 50 freestyle based on past performances and will be guaranteed a spot in the event at her second Olympics.

In addition to Henique, 4 other women were under the prelims qualifying standard here, lead by Charlotte Bonnet in a 24.99 who qualified for Tokyo this week already in the 100 and 200 freestyles and could potentially be adding a 3rd individual event to her lineup.

Marie Wattel followed with a 25.04 and like Bonnet, has already made Tokyo in 2 events. She’s on the team for the 100 free and 100 butterfly. In 4th during the prelims, Beryl Gastaldello was a 25.08 and will need to get into the top 2 and under the 24.77 FINA A. Gastaldello has been just over what she needed to qualify in the 100 back, fly, and free, and will be hoping to qualify for her first official event for Tokyo during the final.

Anna Santamans rounded out the top 5 by getting under 25.51 with a 25.43 and will be gunning for a spot in the top 2 tonight against this impressive field.

Behind Syoud, 4 French men swam their way into contention to qualify for the Olympic team during the final.

100 and 200 backstrokers Mewen Tomac and Yohann Ndoye Brouard are already lined up to race that double in Tokyo but might be able to add the 200 IM to their race lineup here should they pull off a sub-qualifying time top 2 finish tonight. Tomac was a 2:01.01 for 3rd seed in the heats while Brouard was a 2:02.39 for 5th.

Finally, Max Berg will have a shot at qualifying for his first event for Tokyo in the 200 IM final, having hit a 2:02.34 for 4th place in the prelims.

No one got under the preliminary qualification standard in the women’s 200 back as the entire field trailed the 2:14.30 they needed in the heats as well as the 2:10.39 that will be needed in the final.

Cyrielle Duhamel and Fantine Lesaffre were the fastest 2 in the prelims but likely won’t be adding the 200 back to their slate of events in Tokyo. Duhamel and Lesafrre actually qualified together earlier on in the meet to race the 200 IM.

Swiss swimmer Fanny Borer was third overall in the heats with a 2:15.13 but wasn’t likely fast enough to get nominated to the Olympic team in the event. Currently, 200 IM national record-holder Maria Ugolkova is on the roster for the Swiss in the 200 IM as one 2 women qualified to race individual along with Lisa Mamie in the 100 and 200 breast.

French Olympian Mehdy Metella has seemingly completed his successful comeback following a shoulder injury back in 2019 and subsequent 2020 surgery. Metella rocketed to a 51.18 100 butterfly during the heats of the event which is well under the 51.96 he will need to qualify for the event individually.

Metella may have company in the event in Tokyo as 4 other French men got under the prelims standard of 53.52 and will try to crack the 51.96 they need during the final.

Nicolas Vermorel and Stanislas Huille both dipped under 53 seconds here with a 52.60 and 52.79, respectively, while Clement Secchi and Charles Rihoux were next in a 53.40 and 53.43. Of those top 5 men, only Metella and Rihoux have qualified for Tokyo 2020 thus far, both as members of the 4×100 freestyle relay.

I hope Manaudou was swimming an easy 22 for the prelims, he should be a medal contender in Tokyo !

I hope there will be some exciting swims today. So far, French trials has been a snooze fest

The French have been off the pace for a little while now….

If the Olympic games had taken place as planned last year, I think that Manaudou would have been our only chance for a podium. Here, there are already grounds of hope and I find tonight’s finals very attractive.

Why my pic doesn’t appear when I post the link? 😡
It works for Steve Nolan. Why not for me? It’s a conspiracy! 😆

Did Philippe Lucas swim in the trials?

What did he swim and how fast?

He will haunt you! 😆
Look at how he scolds you every time you troll the discussions about French swimming.
And one advice for you. You should not play with Lucas.
Remember what happened to Amaury “hamburger” Leveaux when he dared skip a few practices before London 2012!
Leveaux has not still recovered 9 years later.
https://www.youtube.com/watch?v=sIGV_Ua4Ndg

Why are you showing the women’s results under the men’s 50 free? Confusing