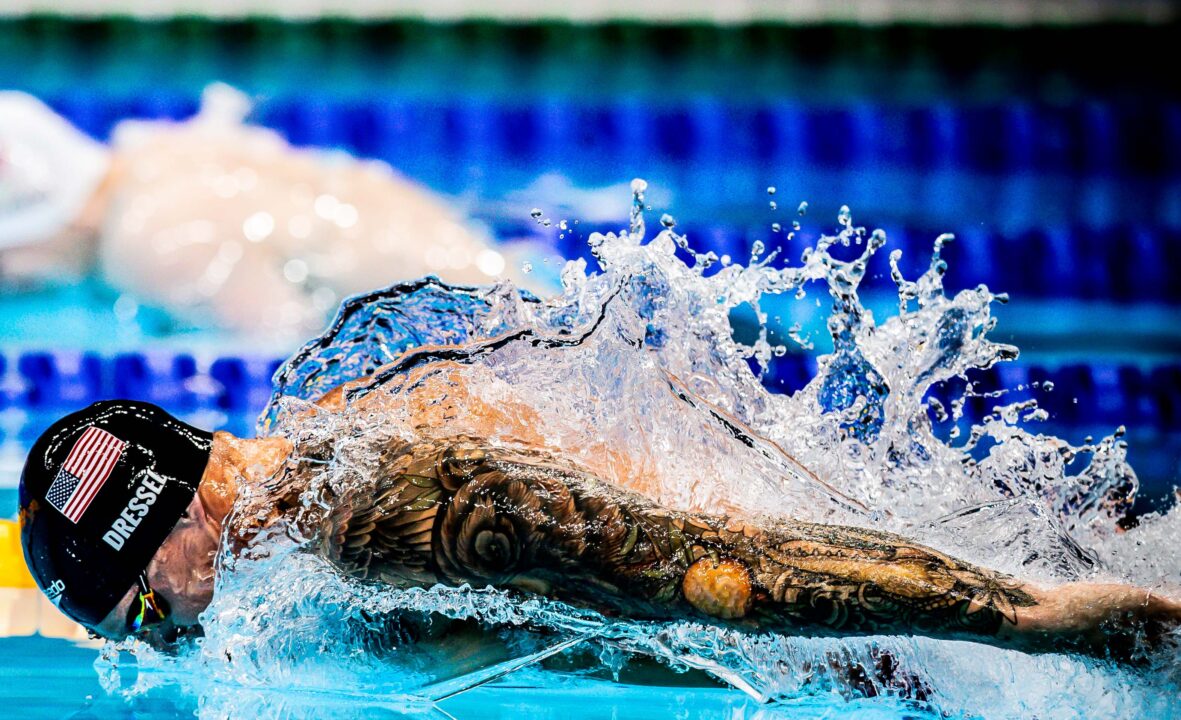 There are plenty of events missing a lot of big names in Budapest. The men’s 50 butterfly is not one of them.

And that’s just the beginning–let’s get into it.

Let’s start with the three world record holders. Govorov set his back in 2018, when he swam 22.27 at the Sette Colli Trophy to demolish the old record of 22.43, set in 2009. At Worlds the following year, he was unable to replicate his time and finished sixth in 22.91. At the end of 2019, he underwent shoulder surgery and missed the 2020 Olympic Games, so this will be his first major long course championship in three years. Recently, he’s been on the Mare Nostrum Tour and has clocked 23.36 as a season-best. That’s the 22nd-fastest time in the world this year, so he’ll need to find his form quickly to challenge for the podium.

The fastest time in the world this year belongs to 42-year-old Santos, who blasted 22.73 at April’s Brazil Trophy. He nearly broke his own Brazilian and South American records, which stand at 22.60. Santos has been a constant in this event for years; he won silver at Worlds in 2015 and 2017, then bronze in 2019. In December, he won gold at SC Worlds. He won the 50 fly at all three stops of Mare Nostrum. He’s clearly still a threat for a medal–22.73 was what won silver in 2019–and thinks he’s got a swim under 22.60 in the tank.

Szabó has been explosive in the short course pool recently, tying the world record and winning three golds at SC Euros. This could be the moment for him to prove that his long course ability has caught up to his SC prowess: he was fifth in this event in 2019, and in 2021 he had the second-fastest time of the season. His lifetime best is 22.90, and he’s gotten close to that this season with a 23.08. Look for him to give a real run at the podium.

Despite not owning the world record, as the most dominant sprinter in the world right now, Dressel is the favorite in this event. He scorched a 22.35 in Gwangju for the gold medal, a lifetime best, and new championship and American records. This season, he eked out the win at U.S Trials in 22.84 ahead of Michael Andrew, but was open about still having a lot of work to do before Worlds. If he’s on form, we could see a new world record in this event before the meet is over.

2017 world champion Proud is one of the best pure sprinters in the world. After winning this event in 2017, he fell to seventh in 2019, so he’ll be looking to bounce back. His personal best is 22.75, which is from 2017. He hasn’t been close to that in a bit, but at British Championships he clocked a 23.09 to win, which was a strong swim, especially at that point in the season.

Manaudou hasn’t been quite as fast this season as the other two previous world champions in the field. His best this season is 23.31, well off his lifetime best of 22.84. Manaudou has said that this year is a “transition” year for him as he looks toward the Paris Games. His primary focus since coming back has clearly been the 50 free, but he’s got the explosiveness and proven ability in this race to challenge for one of the top spots.

BEST OF THE REST

There are several swimmers who have a real shot at challenging the world record holders and former world champions for medals.

23-year-old Andrew might have the best shot of doing that. He’s a versatile sprinter, and dropped the 200 IM this year to focus on these shorter distances. Andrew made history at Worlds in 2019 by becoming the first man to final each of the stroke 50s, but he fell short of a medal in all three, finishing fourth in this event. Similar to the 50 free, the key for Andrew will be to not fall off from his time from Trials. In Greensboro, he went 22.87, which is right on his best of 22.80. If he can repeat that time, or better it, he’ll have a real shot at claiming a medal this year.

Singapore’s Teong Tzen Wei has had a breakout meet at the Southeast Asian Games. In the 50 free, he dropped from 22.39 to 21.93 to become Singapore’s first sub-22 swimmer ever. In this event, he ripped a 23.04. Those are huge swims for the 24-year-old, and he’ll look to replicate those times in Budapest. If he repeats his time in the 50 fly, he could find himself with a lane in the final.

At the Canet stop of Mare Nostrum, Dylan Carter swam a season-best 23.15 to finish fourth, .01 behind Szabó. That’s just off his lifetime best of 23.11, which sets him up nicely heading into Worlds. At SC Worlds in December, he won silver, so he’ll be looking to try to replicate that in the big pool.

Kristof Milak is in a class by himself in the 200 fly, but he comes back to earth here in the 50 fly. His best is a 23.50 and he’s been 23.56 this season, finishing second to Szabó at Hungarian Championships. If he’d like to make the final in all three butterfly events, he’ll need to drop time.

We’ve got three men separated by two-hundredths of a second–Chalmers, Thomas Verhoeven, and Thomas Ceccon. For Chalmers and Verhoeven, these swims this season were lifetime bests; Chalmers was 23.21 and Verhoeven was 23.22. Ceccon is sitting a hundredth off his best with a 23.22. These three sitting so close together shows how deep this event is and how, no matter who makes it through to the final, there’s going to be at least one big name left out.

Dark Horse: Josh Liendo (CAN) – Liendo had a strong Canadian Trials, winning three events and breaking the Canadian record in the 50 free. In the 50 fly, he’s been 23.63 this season. He’ll need to be faster than that to final, but he wasn’t shaved for Trials, indicating that he could have more in the tank for Worlds.

I reckon Chalmers will have a chance at the final 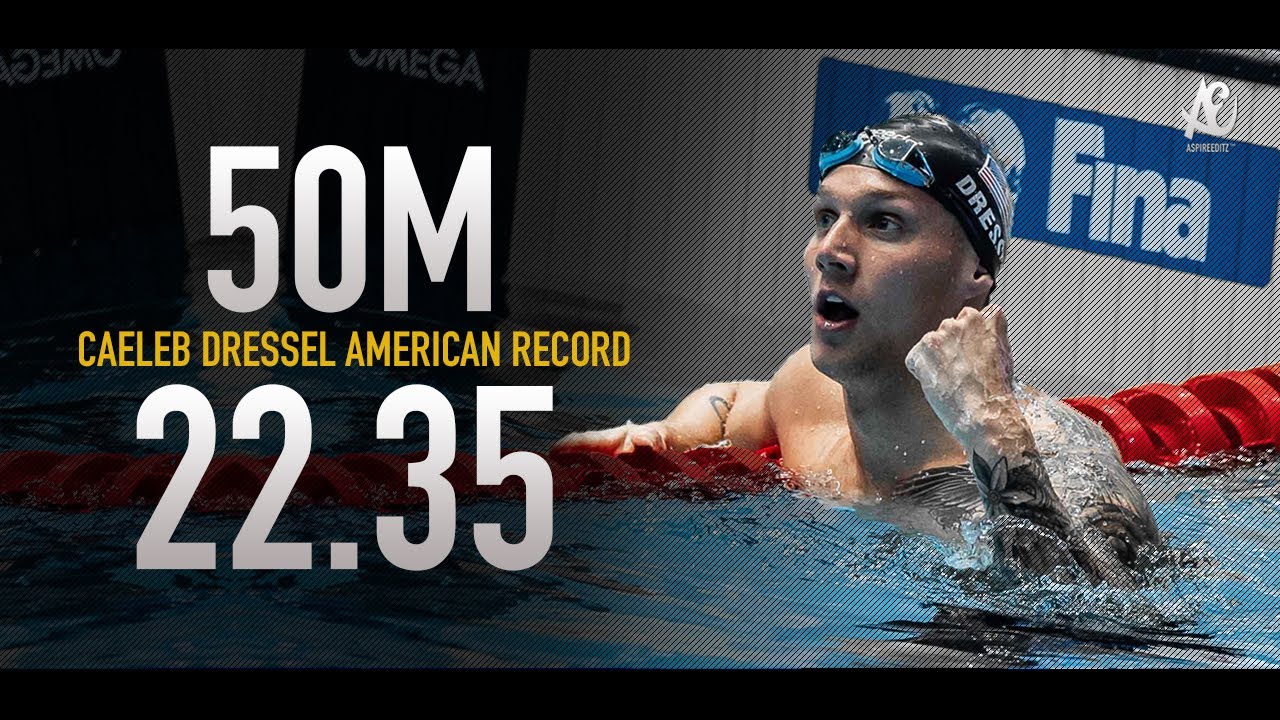 I would put Liendo in the final. Given his age and recent trajectory he has significant upside.

I think Szabo and Andrew should be swapped but other than that I agree.

Sadly your right (commenting from the hungarian side). Szabó has some insane 50 butterfly short course times, but not in a 50 meter pool. He doesnt have a time under 23 seconds is 3 years and his PB is way slower then the big 3. And even the fourth, the last world championship silver medalist cannot swim…

i can’t see a 42 year old beating dressel. Nobody has the start and breakout of dressel. Age is a big factor, even in a sprint.

Santos finished ahead of Dressel in 2017 and hit his 3rd best time ever this year.

Sorry, we don’t care about your furosemided brazilian.

Santos actually is the same speed or faster to 25 he just fades at the end of LC races. Check ISL videos if you want proof.