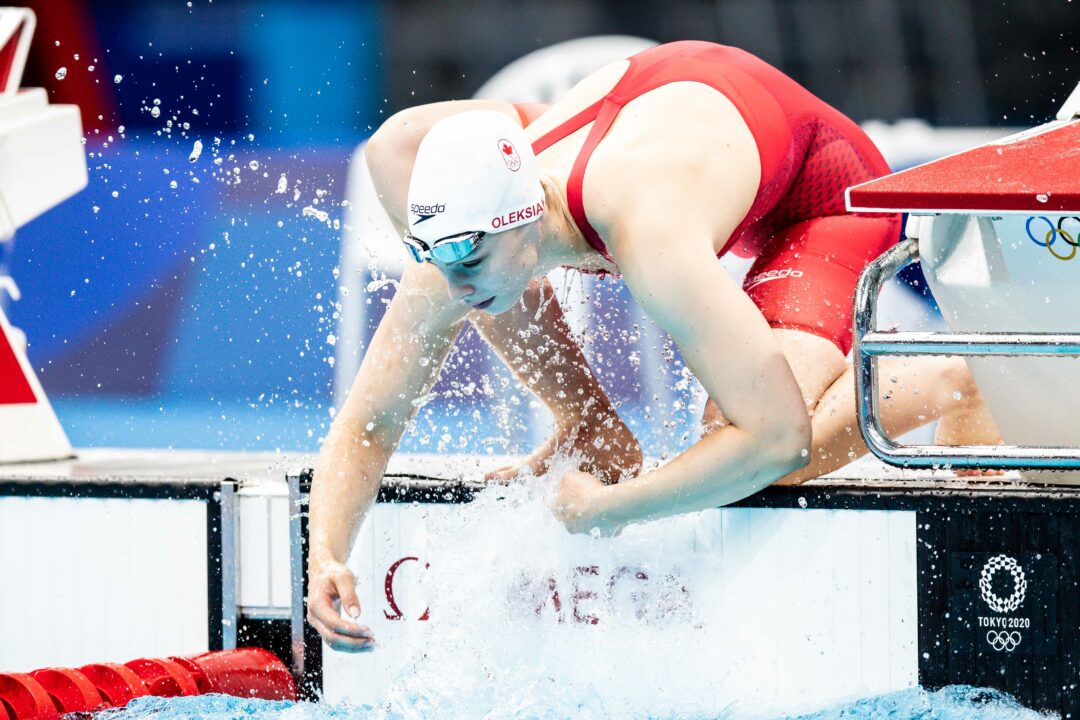 "I have decided this is the best option long-term to prepare for the 2023 season and into Paris 2024,” Oleksiak said. Archive photo via Jack Spitser/Spitser Photography

Another bonafide star has dropped out of one of this summer’s major championship meets.

Canadian Penny Oleksiak, a seven-time Olympic medalist and a medal favorite in multiple events at the upcoming World Championships, has withdrawn from the Commonwealth Games.

Oleksiak made a joint announcement with Swimming Canada on her decision from Budapest, where the World Championships will begin on Saturday.

The 22-year-old said that forgoing the Commonwealth Games, which will begin just over a month after the conclusion of Worlds, was ultimately the best decision for her moving into the next two years.

“I am excited to compete at world championships, but after thinking long and hard about the additional commitment of Commonwealth Games I have decided this is the best option long-term to prepare for the 2023 season and into Paris 2024,” Oleksiak said.

Swimming Canada added that it will be considering adding an additional swimmer to its Commonwealth Games roster. Another swimmer on the Canadian World Championship roster, Taylor Ruck, will also not be competing at the Commonwealth Games.

Atkinson cited the congested international calendar, which features three LC World Championship meets prior to the Paris Games, as the reason for her withdrawal.

“We fully support Penny and this decision to manage her workload over the long term,” Atkinson said. “We are looking forward to her performances as part of Team Canada at the world championships, and we look forward to seeing what she can accomplish in 2023 and ultimately at the Paris 2024 Olympic Games.”

Oleksiak added: “Ryan and Swimming Canada have been so supportive of my decision, and I am always incredibly appreciative of the support from Swimming Canada and from Ryan as my coach.

“It was hard to make this decision so close to the Games. I look forward to racing with my teammates at worlds, and cheering them on from a distance during Commonwealth Games. I know it’s going to be an exciting summer.”

Oleksiak was Canada’s breakout star of the 2016 Olympic Games in Rio, winning four medals including an individual gold in the women’s 100 freestyle and a silver in the 100 butterfly.

At the Tokyo Games last summer, she added to her total with three more Olympic medals, including individual bronze in the 200 free, and also finished fourth in the 100 free in a Canadian Record time of 52.59.

At the upcoming World Championships, Oleksiak is among the medal favorites in the women’s 100 and 200 free, and will also play a critical role on the Canadian women’s relays.

Oleksiak competed at the 2018 Commonwealth Games in Australia, winning a trio of silver medals on relays.

The pool swimming portion of the 2022 Commonwealth Games will run from July 28-August 8 in Birmingham, England.

Very disappointing….not taking part in a big stage competition for your country NOW because of something that may or may not happen in 2 years time? I’m not a professional athlete, but really…to think that specific daily training sessions will have an impact one way or the other for the olympics in 2 years!

With Canada missing both Ruck and Oleksiak the Aussies will be racing the clock now.

When are they going to hire or name the full time head coach at HPC?

FINA’s garbage timing of WCs diminishes the value of medals and hurts athlete participation, especially with the pandemic cutting the Olympic cycle by a year already, did no one at the top see this coming or act on it?

They did see it coming. They didn’t care.

Fina wanted those sponsorship $$$ so they had to hold a championships

Not only that but there was very likely pressure from USAS as well.

Not every country can complete in Birmingham. Its a shame on Japan to postponing the World again, and Hungary had to step in and organise in just 4 month.