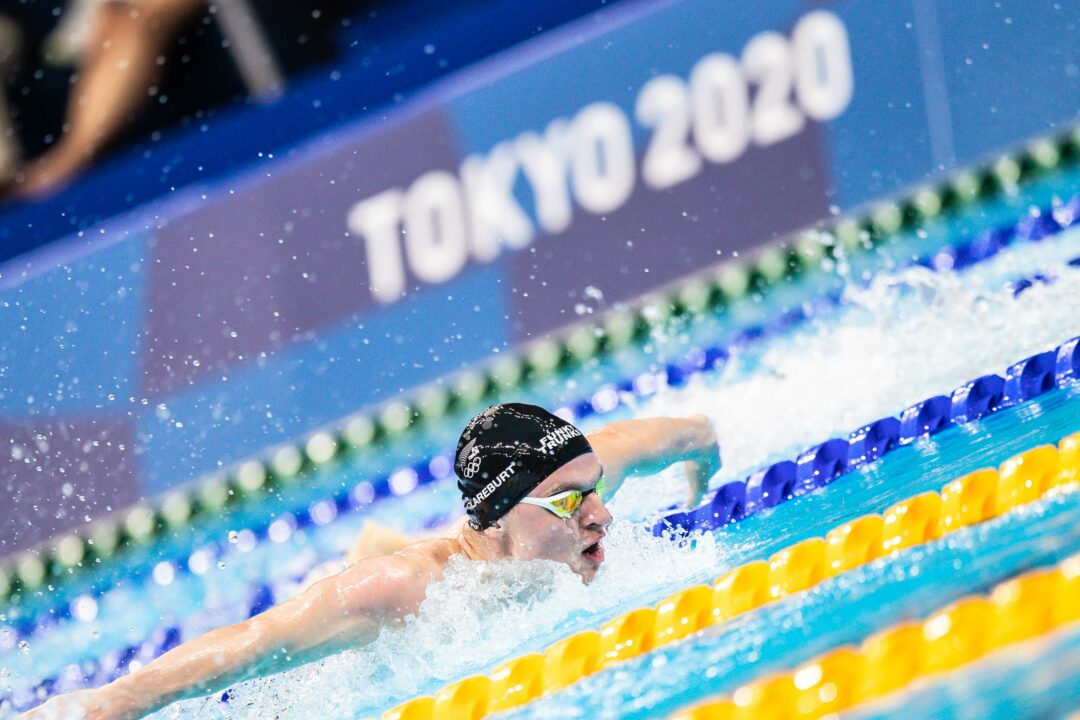 Clareburt stormed over the closing meters to upset three-time defending champion Chad Le Clos in the final of the men's 200 fly in Birmingham. Archive photo via Jack Spitser/Spitser Photography

The 2022 Commonwealth Games saw a number of exceptional performances in the pool at the Sandwell Aquatics Centre in Birmingham, England, as several heavy favorites came through for gold over the course of the six-day meet.

There were a few surprises, however, and one of them came in the final of the men’s 200 butterfly, where New Zealand’s Lewis Clareburt upset three-time defending champion Chad Le Clos with a sizeable best time.

Clareburt had already made a name for himself on the international scene prior to the Games, having won bronze in the 400 IM at the 2019 World Championships and then making a pair of finals in the medley events at the Tokyo Olympic Games.

The 23-year-old had continued his run of IM success the day before the 200 fly in Birmingham, roaring to a big win and new Commonwealth Record in the 400 IM in a time of 4:08.70.

While that performance indicated the type of form he was on, Clareburt was not one of the gold medal favorites in the 200 fly. His best time, set in 2021, stood at 1:57.24, and Le Clos, England’s James Guy and Australia’s Bowen Gough had all been faster than that in 2022 alone, and there was also the lurking presence of all-around talent Duncan Scott, who had taken bronze in the 400 IM behind Clareburt the night prior.

But Clareburt made a case that he was the man to beat in the 200 fly heats, leading the field with a new best time of 1:56.76, and then in the final, he came through when the stakes were high.

Le Clos got out to his usual fast start, and held the lead through the final turn, sitting a half-second up on Clareburt, who was in third, also trailing Guy.

But Clareburt proved to be the strongest man coming home, out-splitting Le Clos by nearly eight-tenths of a second to win gold in a time of 1:55.60, shattering his prelim best time and becoming the first swimmer not named Le Clos to win the event at the Games since 2006.

That mark may not last too much longer, however, as coach Gary Hollywood said he believes Clareburt is capable of being “the best in the world” after what he did in Birmingham.

A native of Wellington, New Zealand’s capital, Clareburt went on to add a third medal in the 200 IM, winning bronze, capping off a standout week in the pool.

5
-3
Reply
HypoxicMemes
Reply to  25Back

If Gaz is running training anything like he did when I was swimming with him, Lewis is working with world record pace as his target for most things.

Lewis is pure talent. The man needs to move to another environment where he’s going to be pushed in training if he wants to crack the medals in Paris in 4 IM. Brendon Smith and him training together is a no brainer in terms of geography.

400 IM is a killer event right now and NZ just doesn’t have the quality to push Lewis to what the other men have in terms of a daily training environment. He is top 3 quality in terms of talent, but he’s doing his best swims in lower pressure races compared to Olympic/World finals (NZ opens, Olympic heats, Comm games finals after a chill heat session). He’s not going to go 4:01 just because… Read more »

Perhaps down to the month long prep at the BEST Centre pool in Mallorca Spain!