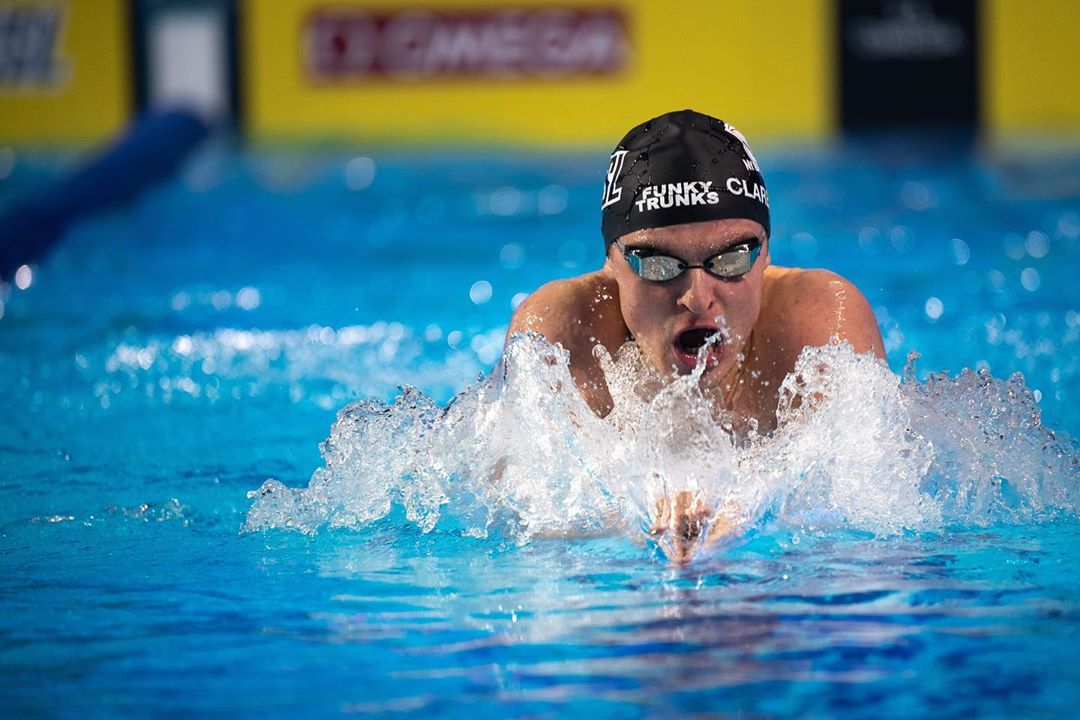 After his win in Birmingham, Lewis Clareburt couldn’t hide his excitement with a time that would have won Olympic gold in Tokyo.

Everything clicked for Lewis Clareburt in the men’s 400-meter IM final on Saturday.

The 23-year-old New Zealander clocked a personal-best 4:08.70, breaking four records while becoming the first Kiwi man in 16 years (Moss Burmester, 2006) to bring home a gold medal from the Commonwealth Games.

“Moss was my idol,” Clareburt said after his milestone victory, according to the NZ Herald. “He’s the one that gave me the dream. When he used to come to Wellington and race a local competition, we used to watch him and wish we were that guy.”

Now Clareburt is that guy. He took down the previous Commonwealth record held by Duncan Scott, who went 4:09.18 at the British Championships in April. Scott earned a bronze medal in 4:11.27 less than an hour after triumphing in the 200 free. Clareburt reset the previous Oceanian record of 4:09.27 held by Olympic bronze medalist Brendon Smith, who claimed silver behind Clareburt with a 4:10.15. He also lowered his own New Zealand national record of 4:09.49 from last summer’s Olympic heats and crushed the previous Commonwealth Games record of 4:11.04 set by Scotland’s Daniel Wallace in 2014.

Clareburt’s previous best from the Tokyo Olympic prelims would have earned him a silver medal had he repeated the feat, but he dropped to seventh place in the finals following a sleepless night. A bout with COVID-19 disrupted his World Championships preparation, and a 4:10.98 in Budapest left him unsatisfied despite a solid fourth-place finish.

“The last two months have been a rollercoaster,” Clareburt said. “I got sick twice. At the world champs, I did a good time but not as fast as I thought I could go. The last month of training has just been getting better and better, and I’ve been pumping out some good times. So I knew it was going to happen.”

After his win in Birmingham, Clareburt couldn’t hide his excitement with a time that would have won Olympic gold in Tokyo.

“To execute at the right time and the right place at the right moment, it’s a pretty cool feeling,” said Clareburt, who will take on the 200 butterfly on Sunday before turning his attention to the 200 IM on Wednesday. “To get the gold medal, a PB, the Games record and a Commonwealth record, I honestly never thought that would happen.”

One of the keys to Clareburt’s breakthrough was an improved breaststroke leg that has been one of the primary focuses of his training. Smith was still in striking distance after the backstroke leg, but Clareburt stretched his lead to multiple body lengths with a 1:11.60 breast split. He turned his supposedly weakest link into one of his biggest strengths rather quickly.

“It’s weird thinking how far it’s come,” Clareburt said of his breaststroke. “I’ve been working on it so much, and it’s never really made a movement, until the last few weeks. I was talking to [coach] Gary [Hollywood] before this, and he was ‘well, this stroke’s one of your main strokes now’ after seeing some of the times we’ve been doing. It’s good to know that what we’re doing is working, and it worked at the right time – it all came together at once.”

While it would have won Olympic gold last summer, Clareburt’s 4:08.70 still ranks as the fifth-fastest time in the world this year behind the three Worlds medalists (Leon Marchand, Carson Foster, and Chase Kalisz) and Ilya Borodin, who ripped a 4:08.05 at the beginning of the week. Clareburt moved up from No. 16 to No. 11 among fastest 400 IM performers in history. His swim ranks 39th all-time according to FINA’s website.

400 IM is getting crowded

For the bronze yeah it’s getting crowded with people entering the 4:08 range but most likely gonna be Marchand and Foster at the top 2 spots unless someone else has a major breakthrough

Respect to Lewis and his coach Gary – a great swimmer/coach combination!!!!!!
You have done yourselves, your family, and your nation proud!

Duncan Scott did incredibly well considering the month he has had and the fact he did a stellar 200 Free an hour prior. Will he do the 400 IM in Paris? It is the day before 200 Free. Hope so, he looked incredibly smooth at 4:11.

Lewis was the best on this day, but Brendon Smith is still a force to be reckoned with.. Comm Games are fun (they all laxxed the heats!) but it’s going to be a job just to make the final in Paris for all these lads. What a stacked event for the next few years!

yes it wouldve won at tokyo but since then marchand, foster, and others have been much much faster

Clareburt is the is fifth fastest in the world this season behind the three world champs medallists – who all did sub 4:08 – and Ilya Borodin who blasted 4:08.05 last week.

Kiwi boys are on

Gary Hollywood is a miracle maker. He leads his club like a true professional and still finds time in his busy schedule to guide Lewis to a gold medal!