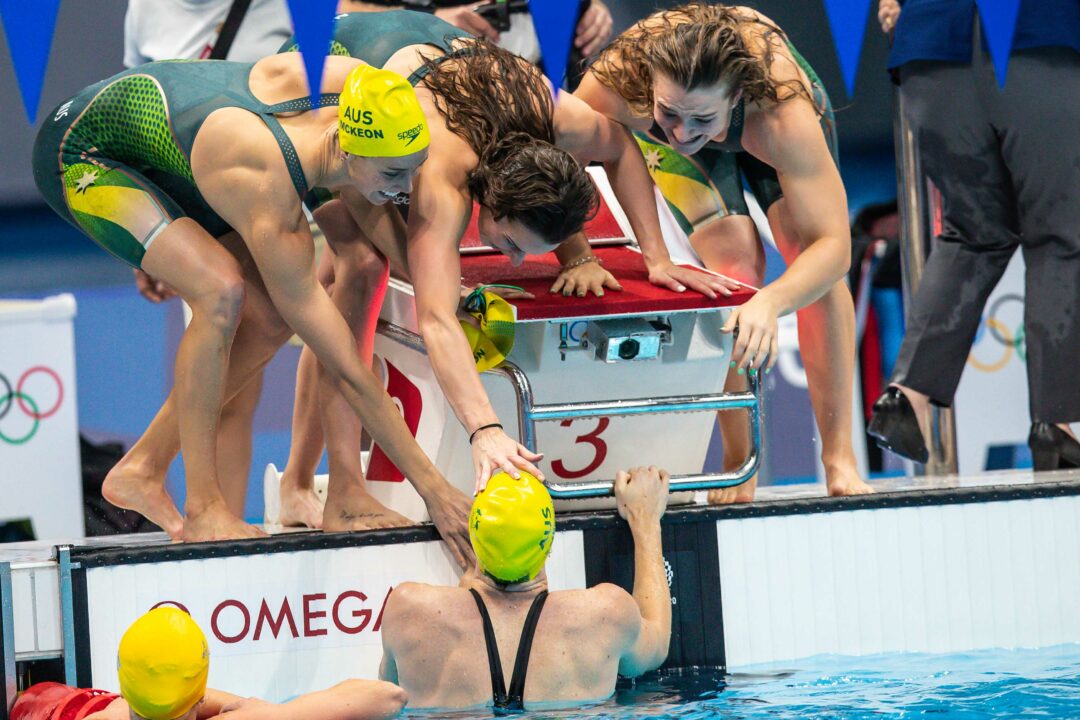 Australia dominated the medal table at the Commonwealth Games, led by the Aussie women who won 14 out of 15 available medals in individual freestyle events. Archive photo via Jack Spitser/Spitser Photography

The 2022 Commonwealth Games have ended. Below is the final medals table, along with the full tables for the women’s and men’s podiums in all events.

Australia dominated the medal table, winning double the total medals than the next most decorated nation. They also won almost half the gold medals, 25 out of a possible 52. Many of their medals came from the women freestylers: of the 15 medals awarded over the five individual freestyle events, the Australian women won 14. The lone non-Aussie to medal in freestyle was Canadian Summer McIntosh, who won silver in the 400 freestyle.

England and Canada also made frequent trips to the podium. New Zealand had a strong meet too, and Northern Ireland won their first medals in the pool ever at the Commonwealth Games, including Bethany Firth‘s gold in the women’s S14 200 freestyle.

Even though they ran away with the overall medal count, the Aussies were actually just off their total from the 2018 Games, where they amassed 73 medals, 28 of them gold.

While England retained their second spot from 2018, Canada leap-frogged South Africa to take third in the standings. They were powered by Summer McIntosh and Kylie Masse, who each earned three individual medals. On the men’s side, Josh Liendo earned two individual medals, while Nicholas Bennett and Nicolas-Guy Turbide each added a gold medal to the Canucks’ overall count. While Canada equaled its total medal count from 2018 with 20, they upped their gold medal count to seven from the three they won on the Gold Coast four years ago.

I’ve been ambivalent about CommGames for well over a decade and that hasn’t changed. Are they sustainable going forward ? Whilst this edition seems to have been well supported; the ongoing problems of trying to find a willing (or coercible) host city/region aren’t going away and the proposed model for 2026 of 4 Victorian (AUS state) region cities with poor transport interconnectibility looks problematic.

Relative sporting merits ? Varies from sport to sport. There are a number of sports where the standard is “bush league” in an international context whereas some others (mostly non Olympic) it can be akin to World Championships whilst others (which is where swimming probably fits falls into the “it varies” category.

Even a quick perusal… Read more »

Thats a really interesting critique. I would say that of course the CG are a level beneath the Olympics and worlds – it’s not trying to compete with those. I would argue though that in some events the CG are of a higher standard than most continental championships, except the US trials and the Europeans, including the pan American games and arguably the Asian games. In some events it’s of a lower standard for sure.

This year’s CGs were totally screwed by the rescheduling of the world aquatics championships and the world athletics championships. But that didn’t mean they weren’t competitive. We saw some great contests – mens 200m free, men’s 4×100 MR, men’s 100m BR amongst others. … Read more »

Australia looking like Team USA at the World Champs.

How do they decide which para events get swim at the CWGs? Men didn’t have any IM races, women no butterfly, no race except mens 50 free has more than one classification. Curious as to why there wasn’t more.

The host nation also gets to choose which para events, so they choose ones in which they are most likely to medal.

On the BBC Ellie Simmonds said that the host nation gets to choose which events are included, so they would choose those in which they would be most likely to medal.

Fantastic showing from the Australian swimmers who have won 50% of all Australia’s gold medals so far! After averaging about 8 golds a day, largely thanks for swimmers, Australia won 0 today and saw its double digit lead over England down to just 3. Battle on for the overall medal table triumph.

9 golds today for the Aussies, nearly back to double digit lead over England again.

That netball result has to sting. But I’m feeling Jamaica as champions tbh.