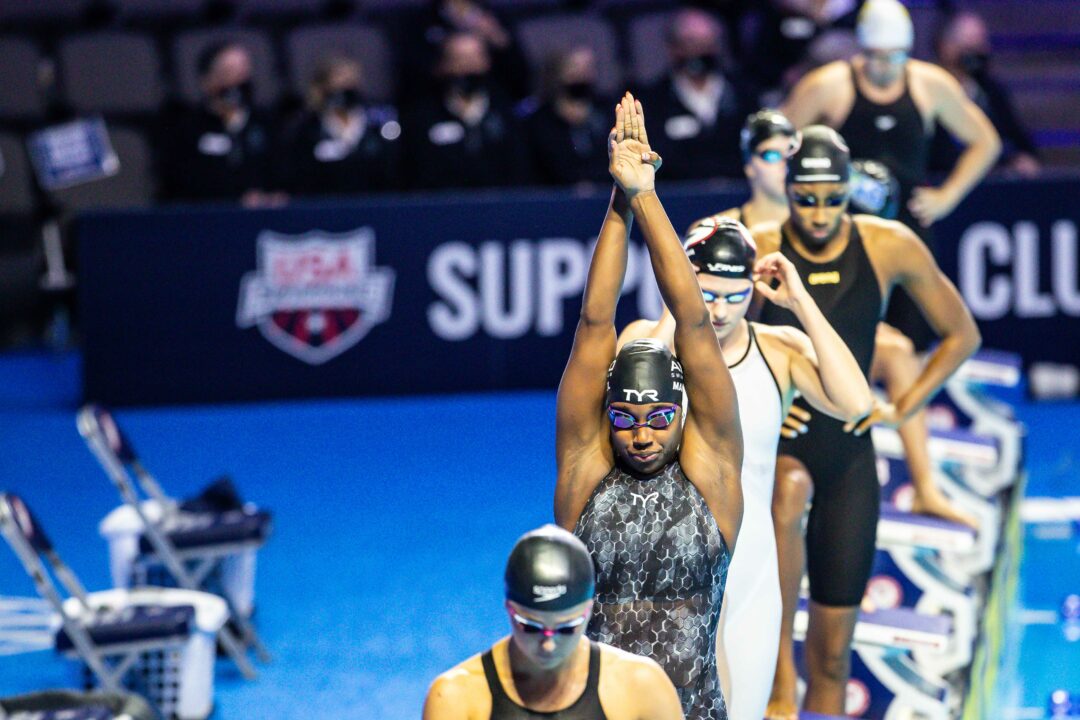 All eyes will be on Simone Manuel tonight as the four-time Olympic medalist has her last chance to get on the U.S. Olympic team. Current photo via Jack Spitser/Spitser Photography

Programming Note: Finals will be live on CNBC, rather than NBC, due to the U.S. Open.

It’s been a roller-coaster eight days of racing here in Omaha, and it all comes to a close tonight as the 2021 U.S. Olympic Trials will wrap up with three more finals.

Despite tonight being the lightest session of the meet, it certainly won’t be devoid of star power.

Caeleb Dressel and Michael Andrew lead the men into the 50 freestyle, both aiming to add a third individual event to their programs in Tokyo.

American sprinting legend Nathan Adrian may have something to say about that, however, as the 32-year-old who has eight Olympic medals to his name enters the night ranked third after clocking 21.78 for his fastest showing since Rio in the semis. After finishing outside of the final in the 100 free, this will be Adrian’s last opportunity to put himself on a fourth straight Olympic team.

If fourth-seed Bowe Becker (21.83) sneaks into a top-two spot, he would no longer be a relay-only swimmer and Ryan Held would make his way on the Olympic roster. As of now, Held is the odd-man out.

In the women’s 50 free, all eyes will be on Simone Manuel as the four-time Olympic medalist vies to make her way onto the Olympic team after finishing ninth in the 100 free.

Catie Deloof finishing first or second would do the same for Held as it would if Becker qualified. Deloof comes in seeded eight after going 24.68 in the semis.

The night closes with the men’s 1500, where three men already on the Olympic team—Bobby Finke, Michael Brinegar and Jordan Wilimovsky—are expected to battle it out.

Finke and Brinegar went 1-2 in Thursday’s 800 free final, with Wilimovsky taking fourth, just over three seconds back of Brinegar. Wilimovsky, fourth in this event at the 2016 Games, solidified his  Olympic spot some two years ago in the 10k open water event.

Note: The Heat sheets indicate that the first race of the night, the men’s 50 freestyle, will begin at 7:15 CT. For television viewers, since the U.S. Open is still running on NBC, Trials will be live on CNBC.

Bobby Finke put on a Ledecky-esque wire-to-wire performance in the men’s 1500 free, jumping out to an early lead and sailing to victory by almost 15 seconds.

Finke, who won the 800 free earlier, finished in a time of 14:46.06, lowering his previous best time of 14:48.70 set at the 2018 Pan Pacs. The 21-year-old Florida Gator moves up from seventh to fifth all-time among Americans, and now ranks fourth in the world this season.

Jordan Wilimovsky took third in 15:05.29, 20 seconds slower than his fourth-place finishing time from the 2016 Games. Wilimovsky is qualified to swim at the Olympics in the 10k open water event.

Thank you to all of the SwimSwam fans for following along all week. Let’s (virtually) go to Tokyo!

The SwimSwam photo curse has officially been lifted.

maybe it was good that it happened

We did it everyone

The meet is currently on NBC Sports and CNBC while golf wraps on NBC.

No one has “destroyed these trials”

How do you consistently have the worst takes possible? It’s almost impressive, do you practice it?

Golf brings in far more money than swimming ever will. That’s just the way it goes.

Very true. I liked the Australian trials via Amazon – that was easier to deal with as a cable cutter.

It’s like………sad because golf is boring. There, I said it.

it’s good to nap to and fun to play at least!

Fine. But don’t put the last night of the Olympic Trials on NBC when you know there’s a 98% chance that your golf coverage is going to last an hour longer than the scheduled time, just as it does every single year. They should have just put Sunday night on NBC Sports to begin with.

I agree! Missed everything on night 8 because of NBC!

I know you are a butt sometimes but you are exactly right. It’s embarrassing how bad we are at making watching easily accessible.

all I see is hockey?

That means you’re not on CNBC

You’re on NBCSports, not CNBC.

They are behind the block!

The meet is back on regular NBC.

So how can I watch it on demand? The nbc recording that says “swimming trials” is actually the us open

MEN’S 50 FREE FINAL
Expected results.
I would have liked to see Mr Adrian make the team but it is what it is. Great career. And great gentleman.

WOMEN’S 50 FREE FINAL
Same qualified US swimmers than in 2016 with Abbey Weitzeil and Simone Manuel.
So glad to see Simone Manuel rebound and make the team. She isn’t the greatest American female sprinter ever by accident. Why not another clutch performance in Tokyo? And if her 100 free shape improves in the next few weeks then Simone could be very useful in the relays.

So the first stage of the ISL draft is supposed to happen today (21st June) where teams announce their first 5 retained swimmers.

Plus the Australian junior and University teams are due to be announced. They’ll swim against each other in Brisbane later this year.

Of course they’ll probably make us wait until after the Olympics to finally update their ranking PDFs.

Yes true. Probably they’ll update it after the Paris Olympics 😂

Can’t believe I watched all 7 nights of swimming and planned to watch the 8th until NBC switched it to CNBC. Was not recorded, so couldn’t watch the finals!! So angry!!!

Just discovered these live streams that Brett Hawke does for the US trials. this is the one from last night with Nicole Livingston, Hackett, Skippy, Michael Klim. Loved Nicole’s commentary on Australians

These are fantastic . Watched bits of this one last night. 100 times better than Rowdy.

Florida is about to start getting a lot more top 5 recruits. They won 50 percent of men’s events at Olympic Trials, and every single freestyle event. Pretty sure that hasn’t been done in modern history.

Amazing Simone did 24.29 with a terrible start. She dipped in the middle of the pool and made a breakout on the right side. She will be under 24 at Olympics, that’s for sure.

But Rowdy said she was 0.68 so it must have been a great start no?

A tremendous sigh of relief!