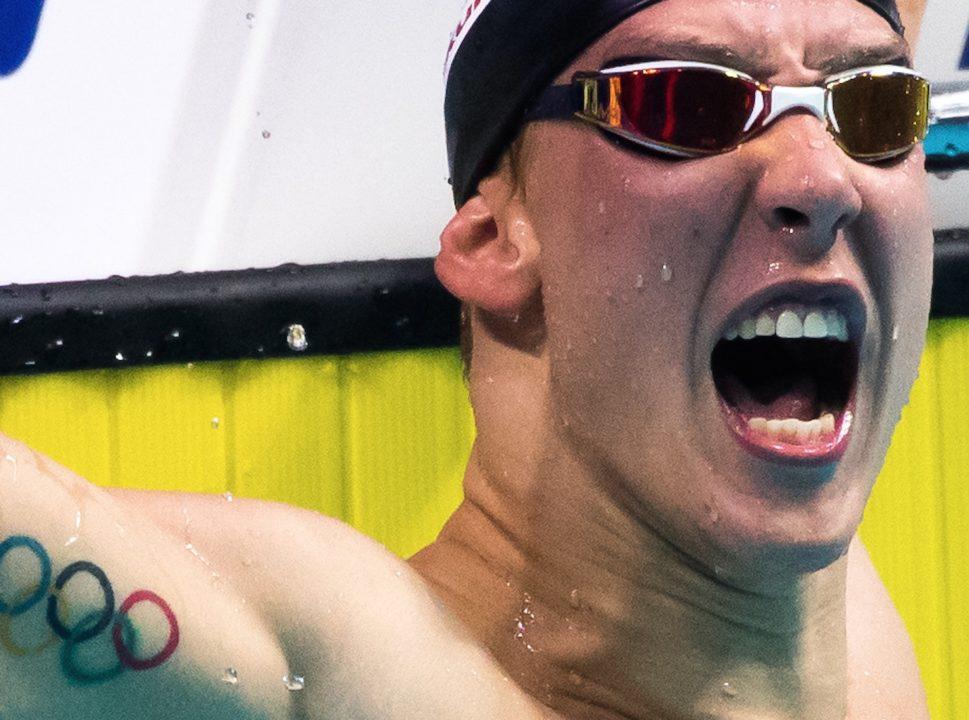 After an incredibly close finish at 2017 nationals, we'll get to see a rematch between Jack Conger, Chase Kalisz, and Pace Clark in the 200 fly. Archive photo via Mike Lewis/Ola Vista Photography

After an incredibly close finish at 2017 nationals, we’ll get to see a rematch between Jack Conger, Chase Kalisz, and Pace Clark in the 200 fly. It’s tough to say who will come out on top of this race, with Conger and Kalisz separated by just 2 tenths this season. Given that Kalisz is pretty much a lock to qualify for Pan Pacs in the 400 IM, he may not need to rest too much for this meet, leaning the favor slightly towards Conger. Because the 200 fly has so many guys who could make a move to place in the top 4, we may have guys like Conger and Clark who need to be a bit more rested for nationals in order to lock down a spot on the Pan Pacs roster. In any case, this should be a good race, and one to watch as Pace Clark tries to once again run down the field at the end. He nearly caught up to Conger last season and ended up clipping Kalisz for the 2nd spot at Worlds.

Also among the Pan Pacs roster threats are National Teamer Justin Wright, Zach Harting, and Gunnar Bentz. Bentz is the fastest of them with a 1:55.51 from 2017, but dealt with a broken collar bone in the fall that set him back some in training during the NCAA season. Last summer, Wright swam his lifetime best 1:56.11 at nationals. During the NCAA season, he earned All-American status as he dropped down to a 1:40.16 in the 200 yard fly. Harting, who shaved off a couple of tenths to go 1:41.54 this short course season, also swam his best last summer with a 1:56.65 at nationals. We could wind up seeing these three battling closely for the final spot on the Pan Pacs roster.

Veteran 200 butterflier and Olympian Tom Shields, who represented the U.S. in both butterflies in Rio, is slated to swim this race in Irvine. Shields didn’t start out the season at his best, citing back problems after a disappointing showing at the Austin Pro Swim. He’s been tinkering with self-training this season and started to bounce back in the spring. Shields fell short of making the final in this event last season, and will have to significantly improve his season best of 1:58.13 to make the team. His fastest ever is a 1:55.09 from 2016. He was slightly faster in season last year and only dropped from a 1:58-low in April to a 1:57-high at nationals. With his new training style, though, we could see a different result.

Though Rooney has been well known since he was a top junior swimmer, he’s typically known for his freestyle speed. Last summer he showed some potential in the 200 fly, setting a lifetime best for the first time since 2014 with his 1:58.57. Since starting at Arizona, Meyer has brought his time down from a 1:59 to a 1:57.54 at 2017 nationals. This season, he’s swum his fastest ever in-season time with a 1:59.36 last month.

In 2014, Seliskar swam a lifetime best 1:55.92 at Junior Pan Pacs and then again at the Austin Pro Swim in 201, but he hasn’t come close to that time in awhile. In his first 2 years with Cal, he focused on the 200 fly as one of his main events, breaking 1:40 in yards. Last season we didn’t get to see him swim tapered since he sat out due to injury. Even though he focused more on the 200 breast during the 2017-18 NCAA season, we still haven’t seen what he can do in the long course 200 fly now that he’s had the opportunity to train at Cal alongside Olympians and top-talent butterfliers such as Shields, Matt Josa, and Justin Lynch. His season best is a 1:58.64, which is the fastest he’s been since he put up a 1:57-low at 2016 Trials, so he seems to be moving in the right direction. If he’s close to his best time, he’ll be fighting for a Pan Pacs spot.

Here after none of them except Conger got top 3

I hope Conger finally breaks through with a time this summer that makes him a legit medal threat, instead of just a finalist, at Worlds/Olympics. Insane amount of talent to think back to his backstroke days, his killer relay splits, and even his 500 free as a freshman at UT.

I hear Clark is a class act

Have to agree with one of the posters, I think Seliskar is flying under the radar. A few years ago, he was a talented long course swimmer and then he had an “off” summer and then a summer off. Short course, he has been hitting best times and been showing improvement. I think he is in the mix for Pan Pacs on this and I wouldn’t call him a darkhorse.

Great battle between Conger & Kalisz for the top spots

Which American can medal in 2020 again the Hungarian and Japanese guys?
MP was the tree who hid the forest since Malchow’s retirement.
Will Conger finally and really take the power? Can a new young talent emerge in time for Tokyo?

idk have you ever heard of this kid Caeleb Dressel?

The Hungarian is hard to beat, but medaling against Japanese is possible. Japanese seldom stay at top level for a long period. You can just look at the example of Sakai who claimed silver at Rio but failed to make the team for Pan pacs this year.
And when talking about 200 fly, Chad Le Clos always has a better prospect than the Japanese. He is a true racer and that made him win gold at Budapest when many people didn’t expect him to do so.

Horomura’s young though, and not a far cry from where Milak is at about the same age. I think it’s naive to think he won’t be dangerous for years to come, especially with a home Olympics on the horizon.

I definitely don’t think koustik was fully rested when he swam that best time. It makes no sense when nationals was just around the corner. I see him at a 1:56 low!! Things will be interesting especially with him comfortably at his home pool!!

Of the B final.

Seliskar will be in the mix