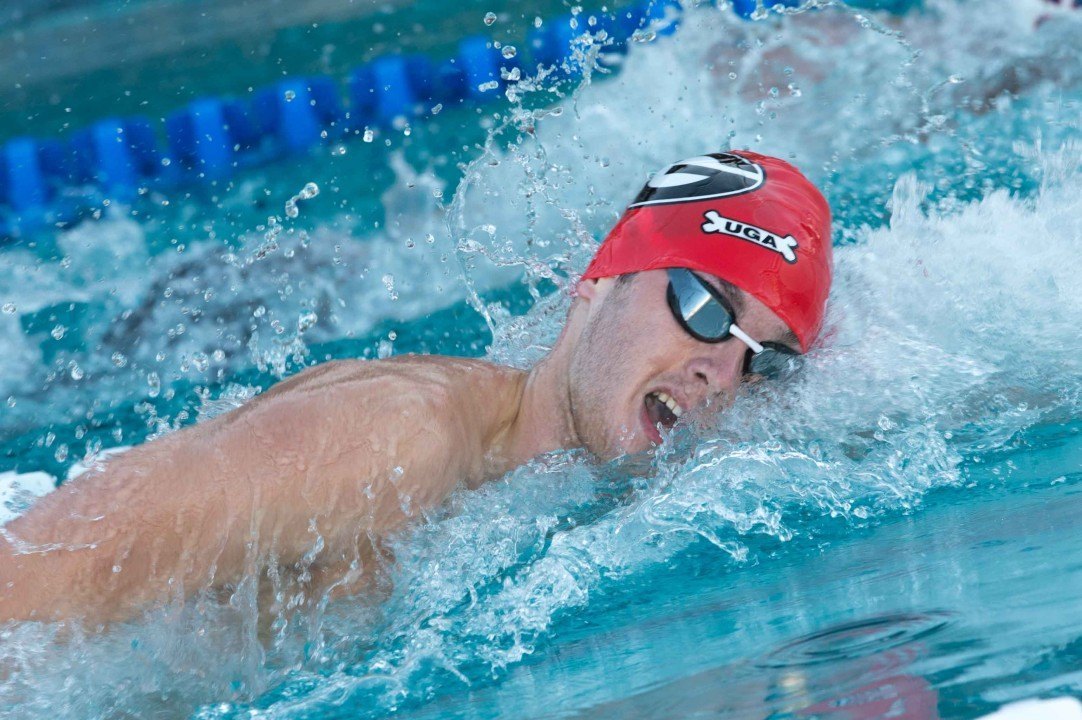 Georgia All-American and U.S. Olympian Gunnar Bentz is out of the water after breaking his collarbone. Archive photo via Mike Lewis/Ola Vista Photography

Georgia All-American and U.S. Olympian Gunnar Bentz is out of the water after breaking his collarbone. According to Collin Huguley of The Red & Black, Bentz broke his collarbone in an incident outside of the pool and underwent successful surgery to repair the injury. He has started the rehab process and expects to be back to 100% in training within a month to a month and a half.

Bentz said he will be back in the water kicking in about a week, and Head Coach Jack Bauerle told the Red & Black that his timetable is “as soon as possible.”

“My timetable for Gunnar is as soon as possible,” Georgia head coach Jack Bauerle said. “I know what those things entail. It just runs its course. As soon as he’s able, as soon as he gets the staples out and is able, then we can get him in the water and start kicking [in about a week].”

While Bentz should be back in plenty of time for the postseason, he will likely miss Georgia’s next 5 dual meets, including competition against opponents North Carolina, Wisconsin, Northwestern, SEC rival Florida, and Georgia Tech. Listen to Bentz talk about the injury and his recovery process in this video interview, courtesy of The Red & Black’s YouTube channel:

Last season, Bentz was a top 8 finisher in all 3 of his individual events. He placed 4th in both the 200 IM and 400 IM, and placed 3rd in the 200 fly. Now a senior, he’s one of the top title contenders in both IM races. Bentz is a key player for the Bulldogs, as he was their top individual scorer at the 2017 NCAA Championships and played a role in the 800 free relay, 400 free relay, and 200 medley relay.

So far this season, the Bulldogs have a relay-only dual meet with Emory under their belts. The Bulldogs dominated that meet on both the men’s and women’s sides. Next up, they have their home opener against the North Carolina Tarheels on Friday, October 6th.

Maybe a party foul lol, those southern schools sure know how to party.

Kinda would think he’d learned his lesson from the Lochte adventure.

way to make assumptions from speculation. A college party is also a completely different thing compared to what he was involved in “the Lochte adventure”. It was accident. You can trip walking down the street and break something if you fall the wrong way. No need to immediately assume the worst of someone

You’ve clearly never been to a college party in Athens. Or downtown on a Thursday-Saturday in Athens…as someone who lives in the town, most nights here are crazier than anything described in the “Lochte adventure.” Most nights end with UGA students roaming the streets like the walking dead and police only grabbing the ones committing property damage or throwing punches (which tends to fill multiple vans). Maybe it had nothing to do with late night antics, but given that no one has said how it happened (training, tripped walking into his apartment, slipped on some gravel, etc…), the atmosphere at UGA, and his history, I would say speculating that it may have involved some partying is hardly a stretch.

He crashed on his moped

I’m sure he wouldn’t want to, but maybe he could look at redshirting depending on how things go?

Meh. Hes less than one year out from going pro. Why bother? cash in while you can.

Probably got beaten up at gunpoint by a robber at a gas station.