2017 Worlds Preview: King The X-Factor For Americans In Medley Relay 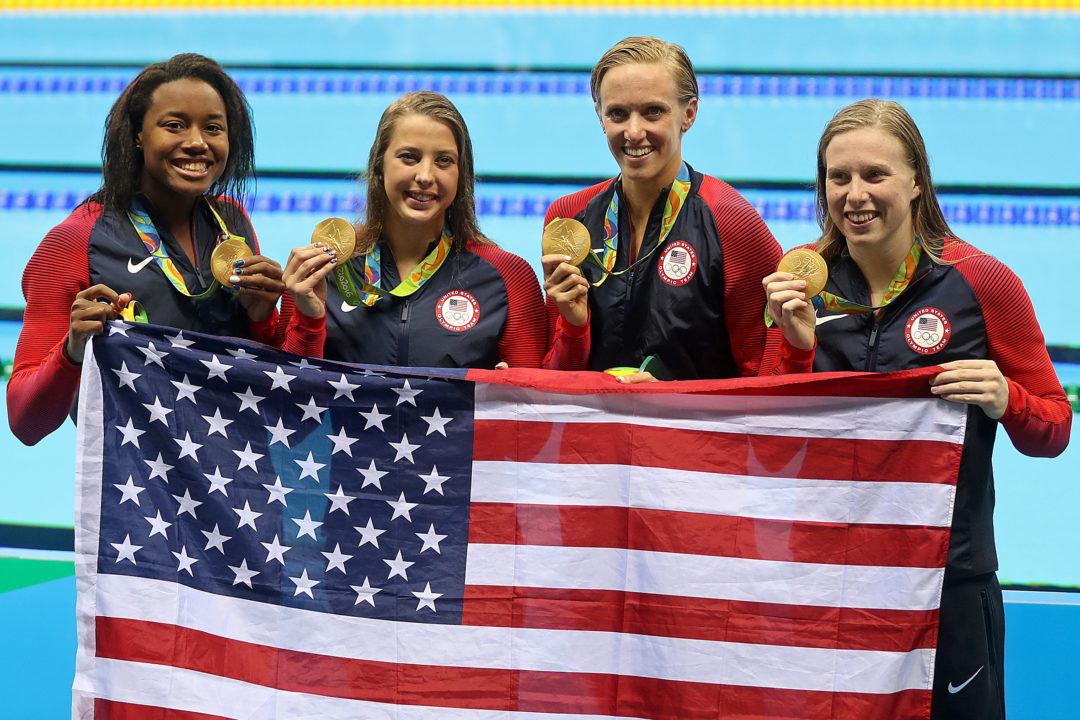 Lilly King will be the leg that divides the U.S. from the Australians in the women's 400 medley relay. Archive photo via Simone Castrovillari

For the last decade the U.S. women have been hit-or-miss in the medley relay. They’ve either won decisively or haven’t come close, with the exception of 2008 where the Australians edged them by six tenths for gold.

After missing the 2009 World Championship final, they were dominant winning four straight titles from 2010 through to 2013, including setting the world record that still stands today in London at 3:52.05. Then, after being handily beat by the Aussies at the 2014 Pan Pacs and whiffing on the medals at the last World Championships, they’re right back on top form.

With breakout Olympic performances from Kathleen Baker, Lilly King and Simone Manuel, along with the ever-reliable Dana Vollmer, they won gold by nearly two seconds in Rio. Their depth is highlighted by the fact their prelim team, featuring four completely different swimmers, would’ve won silver in the final with their morning time.

All four of their members last summer won individual medals in their respective 100m races, which made them the overwhelming favorites, but this time around they matchup a bit closer with the Australians.

The two teams are relatively even on three of the legs, as the Australians have Emily Seebohm, Emma McKeon and Bronte Campbell who are basically on par with Baker, Kelsi Worrell, and Manuel (or Mallory Comerford). However, the breaststroke leg is where the division will come, as King has been 1:04.95 this year, just 0.02 off her Olympic winning time, while Australia’s Jessica Hansen is over two seconds slower at 1:07.06.

Of course anything can happen on a relay, as King split nearly eight tenths slower in Rio than she went individually, but with such a substantial gap on one leg it looks like that will seal the deal for the Americans. Using their season-best times, the Americans come out just over two seconds ahead, 3:53.71 to 3:55.80. Using lifetime best times the gap narrows a bit for Australia, but is still over a second and a half.

In Rio there was an absolute dog fight for the minor medals behind the US. The Australians should manage to have a bigger gap than one one-hundredth this year, but the battle for bronze will remain fierce.

The Danes, who won bronze last summer, have lost two key legs and will scramble to even make the final. 2015 World Championship medalist in the 100 back Mie Nielsen withdrew after initially being named to the team citing a lack of motivation since Rio, and 100 fly 2015 World silver medalist Jeanette Ottesen isn’t competing this year either.

They return 50 free Olympic gold medalist Pernille Blume and 200 breast world record holder Rikke Moller Pedersen, but are relatively weak after that. Emilie Beckmann is a solid replacement on fly, holding a season-best of 58.5, but it’s the backstroke where they are really in trouble. They’ll have to go with Sarah Bro, who has been just 1:03.0 this year.

The three teams who just missed medals last year were the Chinese, Canadians, and Russians. Those three, and potentially the Swedes, are shaping up to duke it out for bronze once again.

Looking at season-best times, China and Russia are nearly identical, but if Lu Ying is around where she was in Rio on fly, China will have the advantage. If her or Zhang Yufei are in the 57-range the two teams are about even, with China strongest on back with Fu Yuanhui and Russia strongest on breast with Yuliya Efimova.

Canada has a dynamite opening leg in Kylie Masse, and has some more star power in Penny Oleksiak. They’ll need to decide whether they want her on fly or free, but that will be made after those individual events. Based off this year, they’re faster using Oleksiak on fly and Sandrine Mainville on free rather than Katerine Savard on fly and Oleksiak on free. Both Rachel Nicol and Oleksiak (on either stroke) were quite a bit faster in Rio than they’ve been this year, so Canada has a good shot at bronze. Going off lifetime bests they have the potential to be competitive with Australia.

The Swedes have three possible combinations that render nearly the same result. Either way it goes their season-best times put them in 3:56-high to 3:57-low range, possibly contending for the bronze. Jennie Johansson will be the breaststroker, but the rest is up for debate. The fastest team has Michelle Coleman on back, Louise Hansson on fly and Sarah Sjostrom on free, but of course Hansson and Sjostrom could flip-flop, which is the relay that won silver at 2015 Worlds. Ida Lindborg could also do back with Sjostrom on fly and Coleman on free. All three add-up times based off this year are within just over two tenths of each other. We’ll have to wait and see what they go with, but anyway you put it they’re potential medalists with the star power of Sjostrom and a solid supporting cast.

The Brits shape up to be finalists once again, but it’s a stretch for them to contend for a medal. They’re pretty solid all around with Georgia Davies, Sarah Vasey, Alys Thomas and Freya Anderson, and Siobhan Marie O’Connor potentially filling in somewhere, but lack the one star who’s going to medal in their individual race required to fight for a medal.

Those seven project to be in the final, and the last spot will likely go to Italy, with Denmark having a slight chance if they all swim lights out. Japan lacks a backstroker and the host Hungarians lack a breaststroker.

It could be. But King split105 high at the olympics which is a pretty bad swim given her individual

Also, Katie Meili’s prelims relay split was almost a second faster than King’s was that night.

A significantly lower quality race than last year and realistically, USA would need to self destruct not to win this. They could probably ring for a pizza and have it delivered by the time the next team arrives !! Who will it be ?? Whilst I suspect that CAN may well prove very serious competition to the USA in the lead-in to Tokyo; I’m not seeing this as being the year we see that challenge seriously rear its head. Without a real quality 2nd freestyler in this team, they face a quandry on where to place Oleksiak. A reasonably sound medal bet but unsure of colour. The other podium spot looks quite tenuous as AUS remains weak on its middle… Read more »

CHN lacks a serious weapon? Did you forget Fu?

When I refer to weapons, I refer to those who can either break the race open for their team or be able to seriously bring back time. Fu is a colossal 50 backstroker but over the 100, is she going to be able to take the race away from the likes of Masse or Baker ….. realistically she’s more likely to be keeping CHN “in the game” at the first change. Hope this answers your question.

Is there going to be a Pickem for worlds this year?

Look on the front page, its already out!

Yes. And there will also be a Pickrem for worlds this year. Her name is Sydney.

Do you have Sydney placing in the top 4 in any event? I am considering her for 4th in the 200 IM