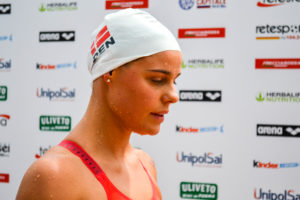 Mie Nielsen
Mie Nielsen is a Danish backstroke specialist who has numerous National Records. Standing 6’0″ Nielsen was born Sept. 26, 1996. She comes from an impressive swimming heritage — she’s the daughter of Benny Nelson, who won a silver medal at the 1986 Olympics in 200 meter butterfly. In 2014 she signed a sponsorship deal with Arena.

London Olympics
At her first Olympic Games in 2012 aged just 15, Nielsen competed in the 100m backstroke and 200m backstroke. She was also apart of Denmark’s 400m freestyle and 400m medley relay.

2015 World Record
In 2015, at just 18 years old, Nielsen broke the World Record in the 100m backstroke at the Mediterranean Open. She improved upon her own record, which was set in April 2014.

Nielsen finished fifth in the finals of the Women’s 100M backstroke with a time of 58.80, just .35 seconds off the Gold Medal and .04 seconds out of the medals. She teamed with Rikke Moller Pedersen, Jeanette Olsen, and Pernille Blume to win Bronze in the 4X100M Medley relay, breaking the European Record with a time of 3:55.01.