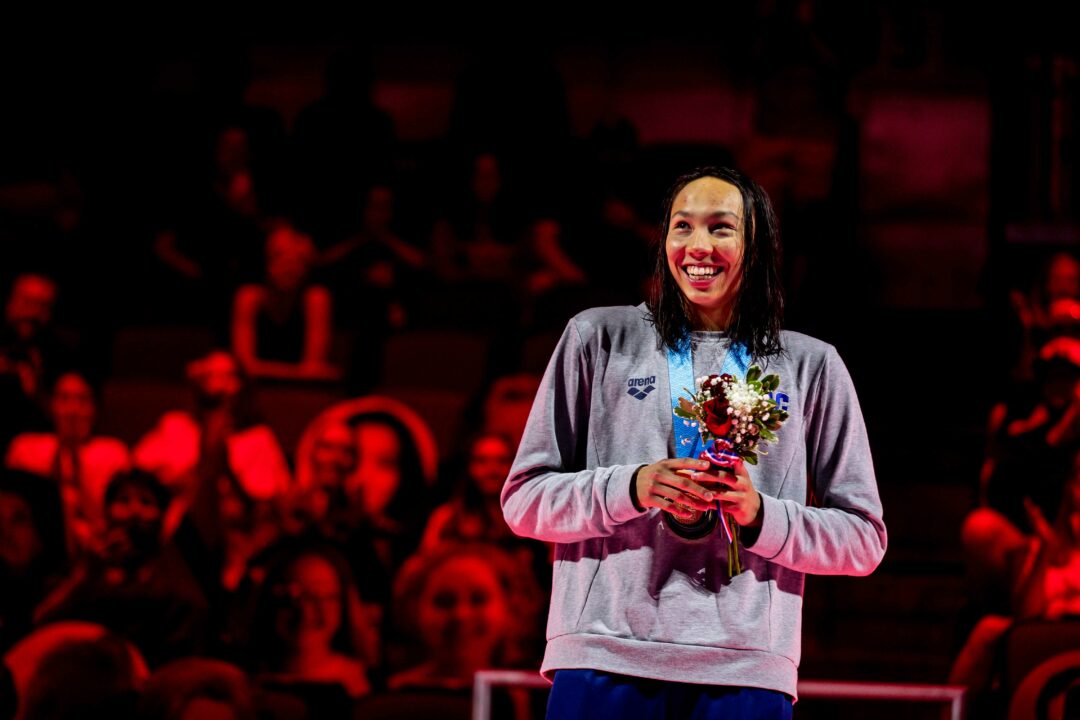 The one-year pandemic delay put established swimmers on the defense. For rising swimmers, they had nothing to lose - and a bonus year to gain it all. Archive photo via Jack Spitser/Spitser Photography

A year-delayed from when they were originally scheduled – and clearly still impacted by pandemic restrictions on training and competition across that extra year – these Trials have been unpredictable. Three and a half days in and we’ve already got several notable upsets, some big names missing the team, and some very unique qualifying situations.

Upsets, rising youngsters, falling veterans, out-of-nowhere Olympians – none of these are unique to the 2021 Olympic Trials. But some patterns are starting to emerge to help us better understand the impact of the one-year delay on these Olympic Trials.

One Extra Year: A Blessing Or A Burden

It’s been said that perception shapes reality. We’re seeing that play out in front of our eyes this week in how the extra year before the Trials has affected athletes differently based on their career standings.

For veterans and swimmers in their prime, the extra year was effectively a hurdle. It was a wrinkle, a wrench in the plans, a challenge to be overcome. While many vets were admirably working overtime to overcome that hurdle, the perspective was entirely different for those who hadn’t yet ‘made it’ in international swimming.

For young swimmers, the extra year was a gift. It was a blessing, it was a free grant of extra time to help track down the leaders. Those who didn’t have the title of 2016 Olympian, those who didn’t have national team status, those who weren’t sponsored pros with established careers – they got another 12 months to work towards those goals. The pandemic essentially put the established guard on the defensive: they had something to maintain, an established place in the hierarchy to protect, a title to defend.

Those with none of that also had nothing to lose – and an extra year to try to gain it all.

We’ve seen that difference in perspective translate loud and clear in the pool this week. On the women’s side, 7 of 10 swimmers likely qualified for Tokyo would be first-time Olympians. On the men’s side, it’s 9 of 13.

It’s been evident in the influx of teenagers to the U.S. team so far. In 2016, Katie Ledecky was the youngest U.S. Olympic swimmer at the age of 19. Less than halfway through qualifying this year, we’ve got Claire Curzan (16), Lydia Jacoby (17), Torri Huske (18) and Emma Weyant (19) all likely qualified for the team.

On the men’s side, 19-year-olds Caeleb Dressel and Townley Haas were the youngest on the 2016 team. Haas is currently one of the older men in line for the Olympic team – we’ve already got 19-year-old Jake Mitchell and 20-year-old Hunter Armstrong likely on the team.

Of course, there are exception to this rule. Chase Kalisz is the veteran of the team at 27 – though now, it feels as though he went into the pandemic with mission of proving he was back from injury. The only other likely repeat Olympians so far have been 26-year-old Hali Flickinger, 25-year-olds Jay Litherland and Ryan Murphy, and 24-year-olds Haas, Ledecky and Lilly King.

It’s not just the extra year that’s making these Trials feel unpredictable. It’s just how weird and unpredictable that year itself was. With the coronavirus pandemic sweeping the globe, competition in the sport of swimming effectively shut down from March through the middle of the summer. Even as competitions started to come back, they were localized, fragmented, and athletes were treating them more as shaking-off-the-rust type swims than building blocks in a meticulously-tailored Olympic plan.

With only limited competition last summer, we’re all working without one absolutely essential data point in predicting these Trials. We’ve been shocked to see some of these veterans miss semifinals and finals. But we also haven’t seen them in a meaningful long course competition since 2019. Had we gotten to see them compete more last summer, many of these declining veterans probably wouldn’t appear in so many of our Pick ‘Em Contest entries – we would’ve seen the decline coming. As it was, the pandemic shielded us from spotting them.

On the flip side, there’s a clear trend in the swimmers who have performed well: high school or college swimmers who had short course yards breakouts, but didn’t get to show us the parallel production in long course because of the Lost Summer of 2020.

Kieran Smith was still a popular choice among fans – he was so impressive with his short course drops for Florida in both 2020 and 2021 that it felt inevitable his long course times would push him to the top of Olympic Trials. We should have expected a similar breakout from Rhyan White, who had two explosive NCAA seasons for Alabama but didn’t really get the chance to prove it in the long course pool.

Ohio State’s Hunter Armstrong cut 1.3 seconds in his 100-yard back this year after transferring in from West Virginia. He cut a second in the long course 100 back in-season this spring, then cut another second at Trials to snag a likely Olympic berth.

If there’s one thing to take away from these first three days of Trials, it’s that momentum matters. Swimmers who went into the weird, long, uncertain Olympic delay with momentum appear to have used that year to continue moving forward – while those who went into the year with the hope of maintaining what they had are now, very often, watching those underdogs swim right past them.

Those who had a college season seem to be performing better than the post grads.

Post grads just look sluggish, like most of the meets they swam in they never had to fight to make it back (pro series with limited heats). Add that with another year with Father Time…

Great points! They are definitely more race sharp than a good portion of the pros who competed in a handful of races this spring.

This article says exactly what we have seen at trials thus far. After such a sussessful ISL season (even though it was SCM), I was surprised by Smoglia not getting her hand on the wall in the 100 back. Sadly, Dahlia just didnt have the speed at the exact time she needed it. Im concerned about Manuel not swimming the 200 free. Mehans long winded statement was a little “methinks you doth protest too much”, with no mention of her prior injury. With Aussies having 4 women go under 53 in the 1Free at their trials, Manuels health is key. Abby W. must step up, as will the vets and rookies who final at trials. Times are just all over… Read more »

Hunter swam the 100 back long course for the first time in 2017. If that’s not mind blowing idk what is

I remember a Michael Andrew vlogpost from about six months ago in which he expressed his gratitude for the extra year to develop more “man strength.” He’s probably right. He’s stronger . . . and faster.

The most likely women to return from the 2016 U.S. Olympic Team:

Thoughtful and interesting article. I’d very much like to read something similar about the seeming decline in US competitiveness at the middle and longer distances.

Jared, thank you for this thoughtful commentary. I think we too often fail to reflect on the macro elements and you’ve done a great job here! I’d vote for more of this kind of writing.