The Most Electric Time Trial In Swimming History 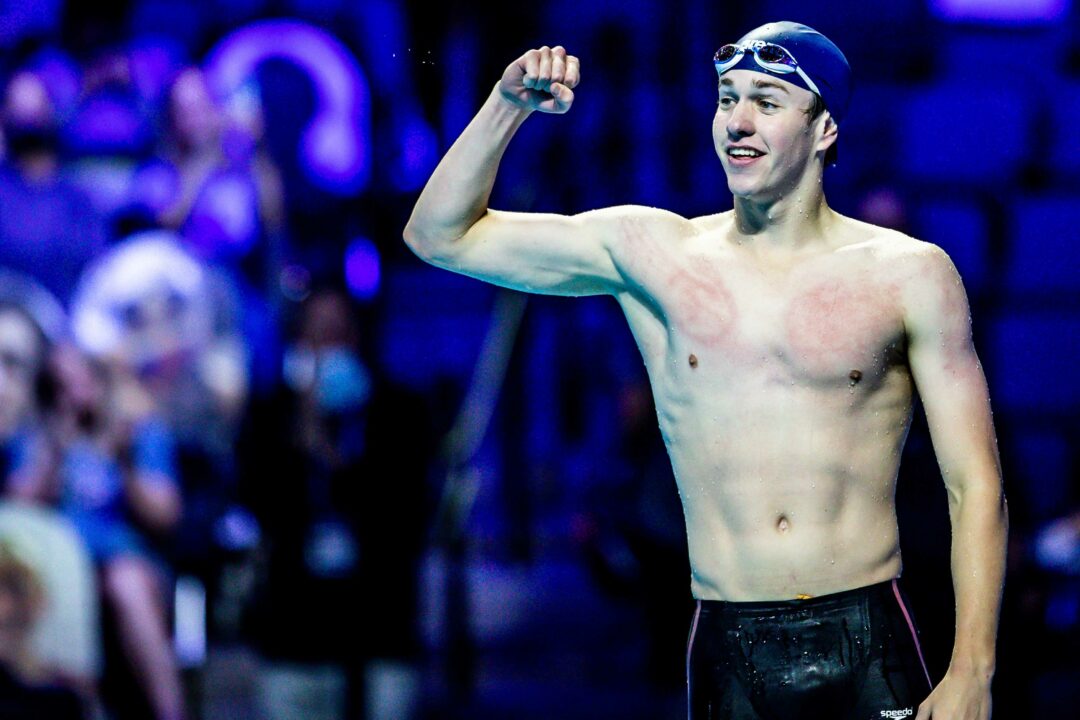 Carmel Swim Club's Jake Mitchell put himself in position to qualify for the Olympic team after blasting a 3:45.86 400 free time trial on Tuesday night. Current photo via Jack Spitser/Spitser Photography

With all eyes on him, Jake Mitchell delivered one of the most memorable Olympic qualifying swims in U.S. Trials history.

As the third night of finals from the 2021 U.S. Olympic Trials wound down on Tuesday night, up stepped Mitchell to the blocks—all on his own—to race a time trial in the men’s 400 freestyle.

The plan for a time trial popped up after winner Kieran Smith was the only one under the Olympic qualifying time of 3:46.78 in the men’s 400 free final on Sunday night. Smith touched first in 3:44.86, and Mitchell placed second in 3:48.17.

It was a situation we’ve never seen before at the U.S. Trials, so we had to dig into the selection criteria to figure out exactly who could snag that second Olympic spot.

Since Zane Grothe, who placed 11th in the 400 free prelims, had been under the ‘A’ cut inside the Olympic qualifying period, he would earn the Olympic spot if no one else who had finished ahead of him at Trials went under the standard inside the period, which ends on June 27.

As the event’s runner-up, that gave Mitchell first dibs on a potential spot—all he had to do was get under 3:46.78, and it was his (even if someone else went faster, since he finished ahead of them in the Trials final).

So, swimming all on his own, with an electric crowd on its feet, the 19-year-old Carmel Swim Club member went out with reckless abandon in the race, flipping two seconds faster at the 100 and more than three at the 200 compared to his time in the individual final.

Mitchell moves up from 24th to 11th all-time among Americans in the event, and will likely earn his first Olympic berth provided the number of roster spots don’t exceed the limit (26 per gender).

You can watch the full race via Jared Daigle on Instagram below:

What I would do to swim by myself in a glowing arena with everyone cheering for me.

Hey swim swam? Would like to know how this happened this way. All the Qs Nolan is asking

is this what everyone is talking about

This man just put the US ON HIS BACK and absolutely clutched it… goosebumps to say the least. Congrats Jake having the, by far, most impressive time trial I have ever seen.

That’s a class act. So much better than bullying teenage girls in the ready room.

That really bothered me too.

Lily King said she likes to psych out her rivals in the ready room. Tried it on Jacoby but she didn’t wilt

I am not sure why this is brought up more about King. She is notorious for being a bully to other swimmers. But yet Rowdy and Michele Tafoya thought it was funny that she was trying to mess with Jacoby before their race. If you are that good, doesn’t your swimming speak for you?

my man took it out ian thorpe style

He is a phenomenal swimmer to be sure, but he got to swim in smooth water the whole time while everyone else has had to do it in a crowded pool full of churned up water. As a scientist who looks to minimize variables as a way to make things equitable, this does not seem fair.

I’m not certain, but I do believe that Zane Grothe, in theory, could’ve registered with 4 friends for the time trial just to create chop.

There’s always gotta be a balance at a selection meet between fair and choosing the best team. Their option here was to sacrifice fairness in exchange for choosing a guy who was 2nd in the race over a guy who was 11th.

I would maybe like to see the procedure tweaked to where Zane gets a shot to beat the time. The rules were probably not written with this scenario in mind – where a swimmer has an A cut but is so far down the standings.

This kind of scenario happens all the time in track and field, where not all of the top three finishers atvtrials make the standard and someone else gets picked who did it in a previous meet. But as far as I know, in track they don’t do time trials.

Track trials during some years for Worlds or Olympics have been far enough out that there have been plenty of years the USATF have allowed athletes to spend a couple weeks standard-chasing at sone of the many second tier meets in Europe after Trials if they had the place but not the time. (Selection criteria changes have made this less common recently)

Anyone at the meet can swim up to four races in time trials, and it’s not unusual for swimmers with no time trial competitors. Hopefully they got the okay from FINA since I could see them arguing the time trial wasn’t part of the meet.

Also he’s rested with no heat this morning. I don’t get it.