Ledecky: “I Think Moving Forward We Can Get Better From Here” 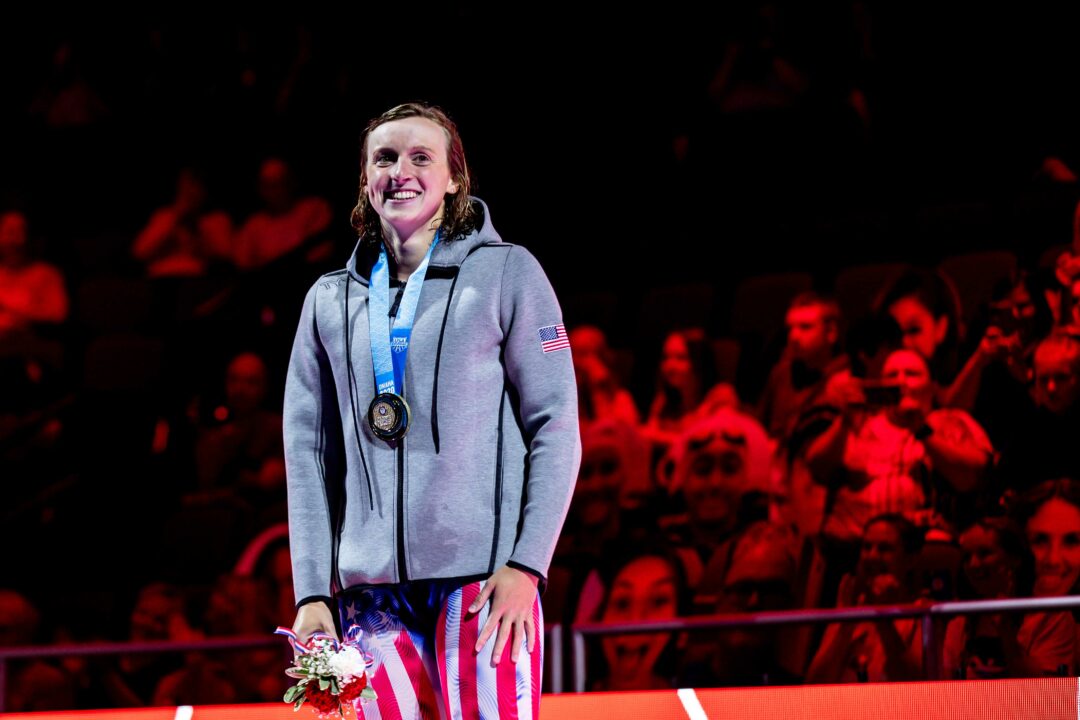 Ledecky's already secured a spot on the team in the 400 free, and will both race the 200 free and 1500 free tomorrow night. Current photo via Jack Spitser/Spitser Photography

Katie Ledecky sat down with the press to answer questions tonight after she swam the fastest time in the semi-finals of the 200 free to earn lane four in tomorrow night’s final. During the conference, Ledecky discussed how she wasn’t thrilled with her times so far this meet, but is focused on preparing between now and Tokyo to be at her best.

..the time is what it is. I think moving forward I feel more relaxed now and feel like of course I have the rest of the week moving forward, but just trying to look for ways to improve between now and Tokyo and just thinking about the things we need to work on in training. Obviously it’s only a month, so it’s not like you can accomplish a whole lot, but I know that the past two Olympic cycles I have gotten a lot out of those training camps and have used them to my benefit.

She also fielded questions on interactions with family and friends, especially after not being able to see people in person as much over the last year, and what it was like to swim with her former coach Bruce Gemmell’s daughter Erin Gemmell in tonight’s semi-final.

Ledecky also explained how she felt just a bit nervous this meet, mostly because it’d been so long since she had swum in front of a big crowd, but also because she respects her competition enough to know that you can never assume the outcome of a race.

I think it just goes back to what I was saying earlier about how we were in this venue with so many fans, the noise, all of it. Just was something we hadn’t experienced all year or really in two years. I mean, if you think back to the last really big meet I swum at was Guangzhou and that wasn’t the most pleasant experience for me.

I think just being back in that environment was — I just needed a reminder of what that felt like. You can’t take for granted that you’re going to make the team, and I think you see that across all the events. There are always surprises and always fast swims being thrown down, best times by other swimmers and things like that.

I respect my competitors so much and respect swimming in the U.S. that I have those nerves that everyone else has. I mean, it’s a tough meet.

Ledecky ranks second in the world this season by virtue of her 1:54.40 swim at the Mission Viejo Pro Swim in April.

Madden, who earned an Olympic berth last night by taking second to Ledecky in the 400 free, touched second in 1:56.44, dropping over a second off her previous best time of 1:57.47 set in May. That slots Madden into 10th all-time among Americans, inching ahead of Katie McLaughlin‘s 1:56.48 from 2019. McLaughlin was third in the first semi in 1:57.37, a time that stood up as the third-fastest overall.

The swims for Forde and Sims were new best times, with Sims moving up to fourth all-time in the 15-16 age group.

For Smith, sneaking into the final is a big deal considering her near Olympic misses earlier in the meet in the 400 IM and 400 free.

Anyone know if she is fully tapered 😉 ? I’d imagine not. She can go these times in season normally.

It was so great to hear her talking about the young guns like Torri and Reagan. She predicted Torri would swim 55.66 and it was right on.

She is a class act

I wished SwimSwam’s foremost expert and Ledecky’s #1 fan YOZHIK were here to give us in-depth analysis.

He’s living in your head.

And I am living in your head rent free